Dedicated volunteers pulled it from brink of demise 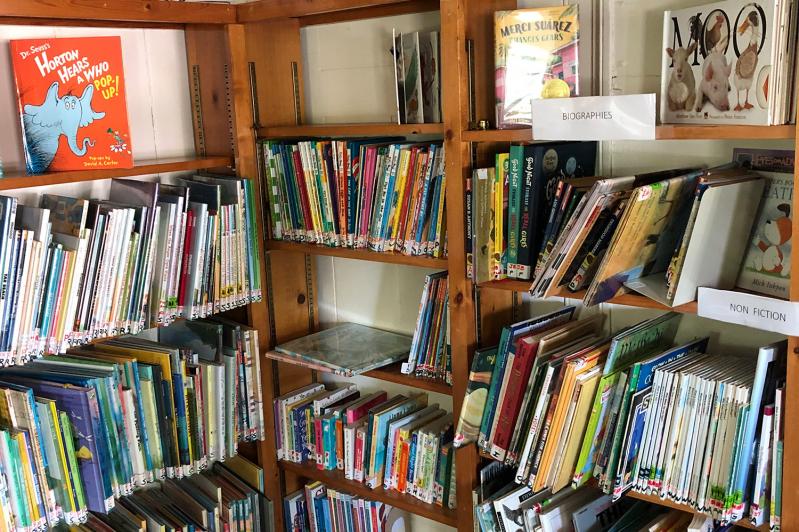 Ethel Henn, the treasurer of the Springs Historical Society, was at her desk in the Springs Library last week, opening the mail and chatting with a visitor, when she suddenly gasped and exclaimed in delight. From an envelope postmarked Henderson, Nev., she had just withdrawn a check for $200, with “For the Springs Library” on the memo line.

The out-of-the-blue donation marked another signpost of recovery along the tiny library’s long road back to health. Not so long ago, its very existence seemed at risk. Last fall, the historical society, which funds the library through gifts and membership dues, was experiencing major headaches, with its tax-deductible status in doubt and its seven-person board of directors down to two — one of whom, Heather Anderson, the board’s longtime Jill-of-all-trades, was about to move to Wisconsin.

In October, The Star reported that the society might go under, taking the library with it. An emergency meeting was called to elect a new board of trustees, not the least of whose priorities was to obtain a new charter from the State Department of Education.

Some people feared that few would attend the meeting. Donna Potter, who lives next door to the Pollock-Krasner House and Study Center, recalled that a neighbor had come by as she was packing to attend a funeral in North Carolina, and implored her, “ ‘If there’s no one at the meeting, can we nominate you?’ ” As it happened, over 100 people turned up, pumping new blood and money into the society and giving the library the reprieve it desperately needed.

At the time, there were thousands of books spilling out of cardboard boxes, stacked haphazardly all over the first floor. East Hampton Town, which owns the library’s 168-year-old building and provides it with heat and electricity, had declared the second floor unsafe.

Volunteers have since unpacked, organized, and reshelved the books, and cleaned the dirty floorboards too. “We’re making use of almost every inch of space, but for the mildew” along the walls and floor, said Ms. Potter, who is now the society’s acting president. “The second floor is now mostly unused. The building needs new windows and insulation — it’s not airtight. But, we finally got new locks on the doors.” There’s a basement, but “nobody would dare go down there,” she said, laughing. “We don’t know who lives there.”

The new board will need to sort out those maintenance issues and others with town engineers. “We await a renewed license agreement with the Town of East Hampton and a structural review of the building before moving forward with plans for programs,” Ms. Potter wrote in a recent email to members of the historical society.

The Springs Library has never had a paid staff; it depends entirely on the kindness of volunteers. Matt Stafford, for one, whose mother, Jean, lives in Wyoming and owns a house in Springs, was “invaluable,” Ms. Potter said, with cleanup and heavy lifting; he also built and installed a handsome new book-drop box. Under the direction of Rachel Kleinberg and Catherine Mattola King, librarians at the Montauk School and Wantagh Elementary School respectively, the children’s room has been rejuvenated and redecorated and now features duck decoys created by the late Bill King, who lived around the corner from the library. Dalvis Tikkanen, who is  married to Deanna Tikkanen’s grandson, speaks Spanish and has offered to include a Spanish-language component in the Saturday morning children’s story hour on July 27.

Mary Beth LaPenna of LaPenna-Lee Gardens has planted a garden, and will maintain it. John Kaufmann provides legal advice to the historical society, and Henrika Conner is its accountant; all these Springs professionals serve pro bono. Finally, Erica Dion of Scribble Designs has created for the society something it never had before: a website. The site, springshistoricalsociety.org, is attractive, informative, and easy to navigate.

Besides donating their time and talents, volunteers have given the library some valuable objects. In September, after her tenant departs, Sharon Burns has promised “a great old Victorian couch,” Ms. Potter said, which will probably live in the office of the librarian, Linda Child. (Ms. Child worked in the insurance industry for 45 years before retiring, and has recently finished reformulating and updating the historical society’s insurance policies.)

Norma Edwards of Springs found a handsome rug at a yard sale and offered to buy it, though when the seller heard she planned to donate it to the library he refused to take her money. At another yard sale, Ms. Edwards spotted a very old map of Springs, bought it, and took it to the East Hampton Library’s director, Dennis Fabiszak, and archivists, Andrea Meyer and Gina Piastuck, who, said Ms. Potter, have been indispensible in helping to preserve the Springs Historical Society archives. They are making copies of the map for their colleagues in Springs and for the wider public. Ms. Edwards, who is in her 90s, has also done some good detective work in the archives, helping to identify now-forgotten or demolished places and buildings.

Finally, speaking of the archives, the Springs Library will open its first-ever art exhibition on Saturday, a show of old one-of-a-kind photographs selected from the historical society’s newly preserved records. The show can be seen from 10 a.m. to 3 p.m., except on Thursdays and Sundays, when the library is closed.