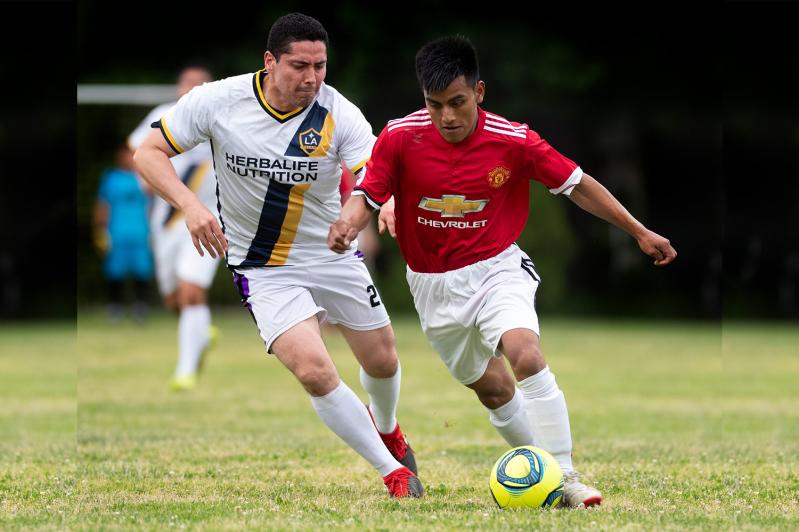 The final regular-season standings, and, consequently, Wednesday’s semifinal pairings, were to have been sorted out at 7-on-7 games played at East Hampton’s Herrick Park July 10.
Craig Macnaughton
By Jack Graves

The lineup for the playoff semifinals of the Wednesday evening 7-on-7 men’s soccer league that are to be contested at East Hampton’s Herrick Park Wednesday was to have been arrived at in games played last night.

Going into them, East Hampton Soccer Fever, under whose aegis are a number of youth teams playing in the Long Island Junior Soccer League, was the front-runner, with 19 points, trailed by Maidstone Market, with 18, F.C. Tuxpan, with 16, and Sag Harbor United, with 14. Tortorella Pools was eliminated from playoff contention last week; Hampton Construction was the cellar dweller, at 0-9-0.

The fall season’s final four were Maidstone, Tuxpan, Hampton Construction, and Tortorella, with Tuxpan emerging as the champion, trouncing Tortorella 7-2 in the final.

Leslie Czeladko, the league’s spokesman, said on the eastendsoccer.org website recently that Soccer Fever, depending on last night’s outcomes, could finish the spring season no worse than second, that Maidstone, again depending on last night’s results, could finish one, two, or three, that Tuxpan could wind up either second, third, or fourth, and that Sag Harbor United would likely finish fourth.

Soccer Fever was undefeated, at 5-0-4, going into last night’s opener with 5-3-1 Tuxpan, and the Market took a 5-1-3 record into its game with 4-3-2 Sag Harbor United. Last night’s finale was to have been between Hampton Construction and Tortorella, though the former has forfeited games in recent weeks.

No games were played on July 3, though on June 26 Soccer Fever clobbered Sag Harbor United 6-1, behind Justin Carpio’s hat trick, and Tuxpan that night defeated Tortorella 4-2 on a hat trick by Donald Martinez and a goal by Christian Neira — a win that eliminated Tortorella, a league champion in the past, from playoff contention. Hampton Construction, which was to have faced Maidstone Market, was a no-show that night.

David Rodriguez, who had scored a league-leading 10 goals before sustaining a knee injury, played in the goal for Tortorella. “He did a fine job,” said Czeladko, Tortorella’s player-coach.

Tuxpan, thanks to the first of Martinez’s goals, led 1-0 at halftime, but blew Tortorella out with three goals in the second frame, taking advantage of lackluster defensive play. Down 3-0, “Tortorella just gave up,” Czeladko said, adding that “at one point it was four Tuxpan forwards against two Tortorella defenders.”

When they last met, on June 12, Soccer Fever, which was undefeated as of earlier this week, and Maidstone, which had one loss, played to a 1-1 tie after having played a scoreless first half.

“Several minutes into the second half,” said Czeladko, “Xavi Piedramartel of Maidstone fired the ball toward the far corner of Soccer Fever’s goal, having seen that the goalie, Esteban Aguilar, had come way out. Aguilar, thinking the ball would go out of bounds, did very little to block the shot, which went into the nets just under the crossbar — a great goal for Piedramartel.”

“There was great action in the second half, at both ends of the field. Soccer Fever kept the pressure on, and tied the score at 1-1 when Sebastian Fuquen converted a penalty kick following a hand ball call within the penalty box. Soccer Fever could have won it on another penalty kick, but Fuquen’s attempt was parried by Maidstone’s goalie, Alex Mesa.”

Concerning the league’s “golden boot” award, given to the high-scorer, Czeladko said, “We have David Rodriguez of Tortorella Pools leading with 10 goals, followed by Jeremias Simon of Sag Harbor United and Donald Martinez of Tuxpan, each with eight. Can Rodriguez, who is injured and finished for the season, hold on? It should be an exciting finish.”

In the “golden glove” competition among the league’s goalies, Sag Harbor United’s Victor Velasquez was leading, said Czeladko, “with just one game to go.”

Apparently, because they will not have played the minimum number of three regular-season games, Mario Olaya, John Romero, and Nick Escalante will not be available to Maidstone Market in the playoffs, though if they played last night Maidstone’s Julian Barahona and Luis Correa will.

Semifinal games, as aforesaid, are to be played Wednesday at Herrick, with the fourth seed versus the first seed at 6:30 p.m., and the second versus the third at 7:40.

The championship final is to be played July 24 at 7 p.m.