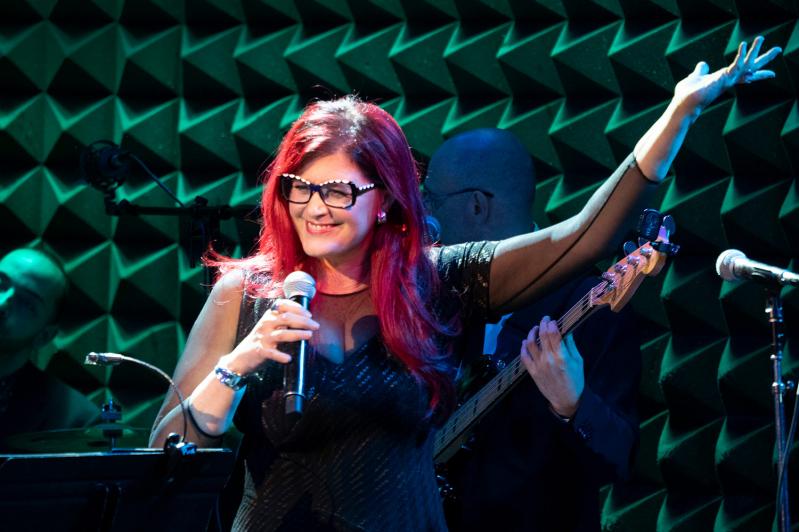 Maria Bacardi left Cuba in 1961, when she was 4 years old, but, as she has said, “I am not in Cuba, Cuba is in me.” Her immersion in the history and culture of her native country is reflected in the music of her new album, “Duele (It Hurts),” released in May.

“Duele” brings a contemporary aesthetic to the Cuban bolero, a musical genre that originated in the Cuban countryside near the end of the 19th century. “It’s the most romantic of music,” she said. “You were supposed to dance it slowly with your partner in a space no larger than a floor tile.” She said the bolero became more and more urban until, in the late 1950s, audiences would listen to the music at clubs rather than dance to it.

“When the revolution came, the boleros were banned, because they were considered too bourgeois and too anecdotal. So the bolero style sort of lost its popularity until the advent of the Buena Vista Social Club in the 1990s.”

When her family left Cuba, her mother brought all her records with her to Madrid, where they settled. The family’s exiled friends would come every weekend, and together they would sing the boleros. “I used to listen from my bedroom in my pajamas, and I learned hundreds of boleros from my mom and her friends.” Ms. Bacardi’s first CD, “Deseo,” released in 2013, explored the metaphors of her native country and the tensions of being forced into exile as a child.

She decided while working on “Deseo” that she wanted to contemporize the Cuban bolero for her second album. In New York she met Edgaro Gonzales, a young Cuban producer and hip-hop artist who was studying at the Berklee School of Music. Along with David Oquendo, a guitarist, arranger, and singer, the three of them developed what they call the “neo-bolero,” which pairs contemporary grooves and beats and more daring sounds with the original melodies and lyrics.

“The boleros I sing are between 80 and 100 years old, so I’m hoping that a young audience can perceive them with our new twist as music composed today, and that for the old guard it will be a rediscovery of the songs of their youth.”

Ms. Bacardi never sang publicly until 2013. She trained as an actress, first in Paris in 1975, then in New York City, where she earned a degree from New York University in drama therapy and psychodrama. “I gravitated mostly toward performance art,” she said, “toward a different kind of theater from Ping-Pong dialogue plays. I began exploring theatrical choreographies with text.”

When she moved to East Hampton in the early 1990s, she formed the Oddfellows Playhouse, which brought together visual artists, poets, writers, and musicians as well as actors. Venues such as the LongHouse Reserve, the Watermill Center, and Guild Hall commissioned site-specific pieces performed by the group. Oddfellows is no longer active. “It has sort of transformed itself into my singing venture,” she said.

She has also, since childhood, created diorama-like assemblages of found objects she calls troves, originally inspired by her visits to Madrid’s museum of natural history in the early 1960s. “The museum was very tired, there were shadow boxes of little animals, some of them didn’t have hair, and they were really sort of haunting.”

While she didn’t attend art school, she came to see the troves as art pieces. “When I arrived in New York in the late 1970s, somebody said they looked like Joseph Cornells. And I said, ‘Who is Cornell?’ I had no idea, it was really an affinity, not an influence.”

She has been on the South Fork since 1991, having lived in Amagansett, East Hampton, and now Springs. She also has a residence in New York City, in part because that’s where the Cuban musicians she works with live.

She has been back to Cuba many times in recent years. “I think the first couple of trips I didn’t see anything, I was crying so much. But every door I knocked on opened 10 other doors. It was very touching. The people are very unique and warm and lovely, and the Cubans are very funny, they’ll make a joke out of tragic situations.”

Ms. Bacardi will perform music from “Duele” on Sunday evening at 8 at Guild Hall, accompanied by a 12-piece band, which will include Mr. Gonzalez and Mr. Oquendo. The program will benefit Project Most. Her youngest son attended the Springs School and went to Project Most in the afternoons. “Most of the kids are Latinos, and while their dads and moms are cleaning up our gardens and helping us in our homes, the kids need a place to go. They learn leadership and community there.”