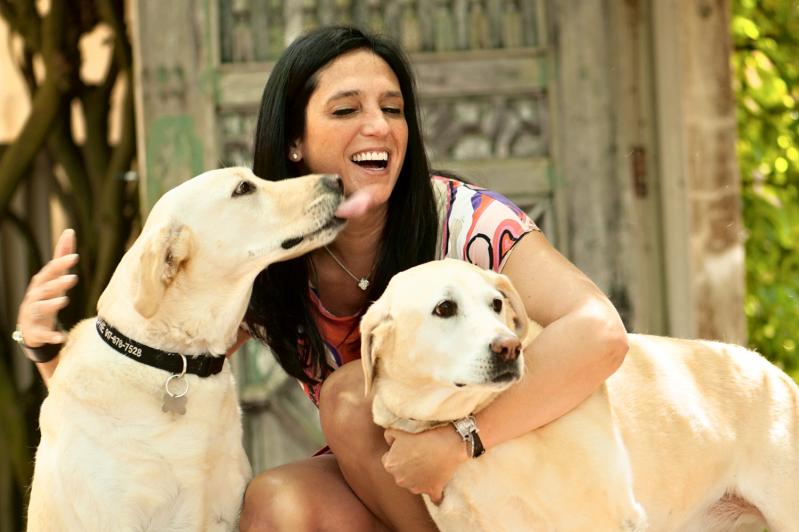 Antonella Bertello, owner of the Baker House 1650, is passionate about real estate, her dogs, Bella and Sophie, and doing her part for good causes like the Samuel Waxman Cancer Research Center, which will honor her at its Hamptons Happening benefit on Saturday night.
Daniel D’Ottavio
By Carissa Katz

Antonella Bertello, the owner of the Baker House 1650, did not set out to be an innkeeper. A businesswoman and real estate broker and investor, Ms. Bertello had bought and sold a number of investment properties in East Hampton with her partners and was looking for another when they suggested she check out what was then called the J. Harper Poor Cottage, an already tastefully redone bed and breakfast on Main Street.

“I always tell my customers about the importance of feeling the space,” Ms. Bertello said on a recent afternoon at the Baker House. In the case of the inn, “I fell in love the moment I walked through that beautiful wooden door. It was a bit of Europe in the Hamptons.” She called her lawyer and accountant, “and I said, ‘Well, how hard can it be to run a B-and-B?’ ”

Fifteen years later, Ms. Bertello knows that “it does have its challenges,” but the experience on the whole has been “very pleasant.”

Not long after she purchased the J. Harper Poor House in 2005, she decided on a name change, when friends pointed out the obvious problem with having a luxury bed-and-breakfast nicknamed the Poor House. After a bit of research Ms. Bertello settled on a new name that harked back to the house’s original construction date.

The core of the house was once a saltbox structure similar to Mulford Farm and Home, Sweet Home. “When J. Harper Poor took it over in the late 1800s, he decided to convert it into an Elizabethan type of structure, but back then, they wouldn’t tear it down, they would just build around it.” In the walls of the oldest part of the house, workers have found “all sorts of interesting things like seaweed, horsehair, crushed shells, really old newspaper . . . glass, corncobs, so whenever I have to go into the walls for anything, I honestly tremble,” she said.

Beams dating to 1648 are exposed in some of the main house’s five guest­rooms. Since purchasing the historic five-room inn, Ms. Bertello has expanded it to include an adjacent property now known as the Baker Carriage House, which has two “super suites” and her own innkeeper’s apartment. The Carriage House property, which now includes a pool, has stunning trees, including some that may be among the oldest in East Hampton, she was told by the nurseryman Charlie Whitmore, an expert on such things. “They’re ginkos, and easily 400 years old,” Ms. Bertello said. She has lived there since 2009.

At both the Baker House 1650 and the Carriage House, “I think that we have a really good formula that works really well, and that people like.” Most people return again and again to the same room at the same time of year, she said. “It’s their home away from home.”

Owning the inn has allowed her to connect with and give back to the community in a variety of ways. “I like to help as much as I can,” Ms. Bertello said. She hosts mixers for the East Hampton Chamber of Commerce (and is a member of its board), opens the Baker House’s doors for events for the local police and schools, and this summer is planning to host an informal fashion show to benefit the Samuel Waxman Cancer Research Foundation.

The latter charity will honor her at its annual Hamptons Happening fund-raiser on Saturday night at the estate of Kenneth and Maria Fishel on Lumber Lane in Bridgehampton. The party, which invites people to “travel the world on a tour de cuisine” will also honor the celebrity chef, TV host, and restaurateur Lidia Bastianich, the designer Nicole Miller, and Ian Duke, a restaurateur who owns Union Cantina, the Southampton Social Club, and Union Burger Bar.

When she was initially asked to get involved with the Waxman foundation, Ms. Bertello wondered if she could give the event its due. “I’m always so busy, I travel so much . . . and to do it halfway is really not my style.” But she was moved by the cause — her father, Luis (Lucho) Bertello, died of an aggressive form of cancer when he was just 46 and she was 22. “I think that we all know somebody very dear to us — or more than one person — that has gone through this horrible disease,” she said last month. She was impressed by the foundation’s approach, which is, according to its website, to “eradicate cancer by funding collaborative cross-institutional research to identify and correct abnormal gene functions that cause cancer.”

“What I really love about this specific organization is that they’re not proprietary; they are full-collaboration with the best scientists in the world that are doing really, really advanced research on how to cure cancer, to understand exactly how cancer works,” she said. “There’s really good business-thinking behind it as well. And I am completely sold on it.”

As for that business thinking Ms. Bertello so admires about the Waxman foundation, she honed hers from an early age.

She was born in Peru. Her mother’s side of the family had Spanish, French, and Scottish roots. Her father was a first-generation Italian Peruvian whose parents “met on the boat” from Italy to Peru in their teens. Her paternal grandfather — “he was a brilliant man and very hardworking,” she said — founded a bank and insurance company in Peru, and her father added a financial company to the family businesses. In Peru, she said, “he was the first guy, the first banker to computerize a bank. . . . He also brought Visa and MasterCard and American Express credit cards to Peru.” His efforts led to the creation of the mortgage market there. Before that, “there was no credit, there were no mortgages in Peru to buy a house; they had to pay cash or borrow from parents or the family or what have you.”

Her father also developed and sold commercial and residential real estate, both in Latin America and in the United States. Her younger years were spent in Peru, Argentina, Costa Rica, England, Paris, Madrid, Miami, and Boston. When she was a child her father would take her, her younger brothers, and her mother to see all of his jobs. “He would say, ‘Look at your other brothers and sisters,’ and you’re looking at structures. That’s how affectionate he was toward his projects. I think he was a frustrated architect.” He had “a really incredible vision,” she said, and “was a great guy in every possible way.”

When he died, she took over leadership of the family businesses, and has remained involved in sales, development, construction, property investment, and management alongside her brothers and on her own. “We are all in real estate still, in one way or another.”

“I love real estate; I’m passionate about it,” Ms. Bertello said. She and her brothers are working now on their biggest project yet, a nearly 600-acre nautical and residential development on the coast in northern Peru, the first of its kind in the country. She has projects and businesses here, and in New York, South Florida, and elsewhere in Latin America, and is fluent not only in the language of business and real estate, but in English, Spanish, French, and conversational Italian.