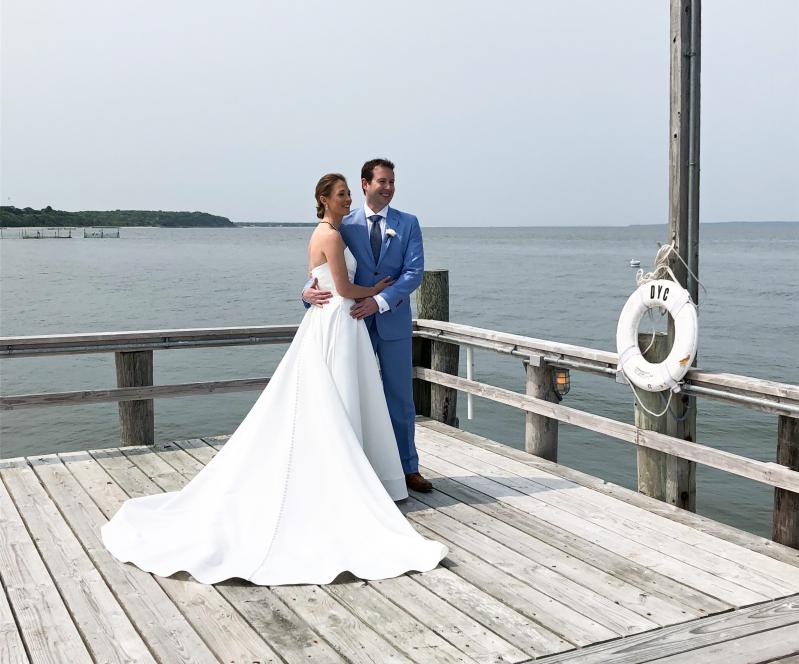 Elizabeth Jackson Pearce and George Coombs Zoulias of Washington, D.C., were married on Saturday at the Devon Yacht Club in Amagansett. Timothy Wilson, who was the groom’s Army chaplain while the two were deployed in Mosul, Iraq, in 2005, officiated. A reception followed at the club.

The bride is a daughter of Jane Ely Pearce and John Inman Pearce of Amagansett and Washington, D.C. Her family has summered in Amagansett since her great-grandparents John Day and Rose Herrick Jackson bought their house on Indian Wells Highway in the 1920s.

The groom’s parents are Christine and Charles Zoulias of Manchester, N.H., and Naples, Fla.

The bride holds a J.D. from the University of San Francisco School of Law and a bachelor’s degree in architecture from Columbia University’s Barnard College. A member of the bar in three states, she has worked as an assistant public defender in Montgomery County, Md., since 2013. Her husband, who served as a special agent in the Army for nine years, is the founder of Perfecta, a technology company that focuses on cybersecurity and “secure collaboration.” The company builds “the technology he wishes he had while in the Army,” his wife wrote.

The couple met through the app Coffee Meets Bagel. Both are big hockey fans, and their first date was the pre-season opener for the Washington Capitals. Nine months later, Mr. Zoulias “picked up the engagement ring the same day the Capitals won their first Stanley Cup,” his wife wrote, adding that they “missed the celebration parade because he proposed that morning in Nevis.”

The bride’s sister, Sarah Pearce of Portland, Ore., was her maid of honor. Her nieces, Katherine and Elizabeth Noteboom and Isabel and Julia Pearce, and the groom’s niece, Zoe Brothers-Zoulias, were flower girls.

The groom’s brother, Zachary Zoulias of Somerville, Mass., was the best man.

The groom’s father’s family is from Greece, and for their honeymoon, the couple are vacationing in Greece.