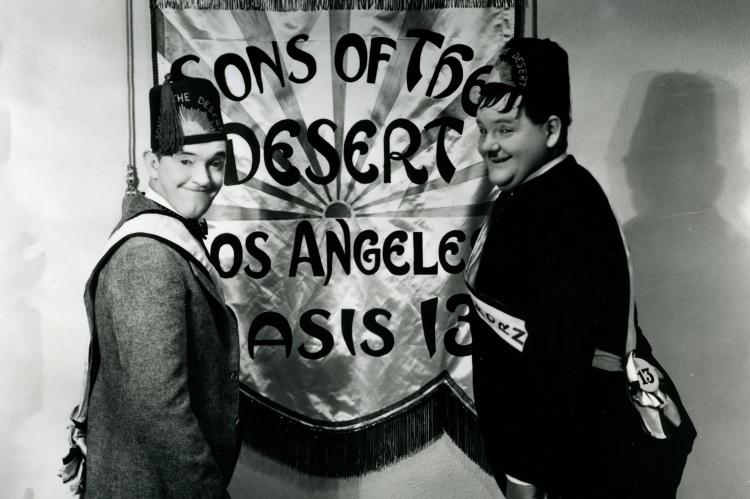 Laurel and Hardy try without success to outwit their wives in “Sons of the Desert,” which will launch the Sag Harbor Cinema’s Really Funny series on Sunday.
By Mark Segal

The director John Landis is best known for his comedies, among them “National Lampoon’s Animal House,” “Trading Places,” “Three Amigos,” and “The Blues Brothers.” But that’s not why Giulia D’Agnolo Vallan turned to him to select the Sag Harbor Cinema Arts Center’s next film series.

“The programming committee was talking about doing something with comedy,” said Ms. Vallan, “and after we showed ‘Grapes of Wrath’ and the audience really responded, I realized there is more of a desire to go back in film history than I expected. So I thought of a comedy series with a historical span, and I couldn’t imagine anyone who could do it better than John. He has a knowledge of film history that is very, very deep and very eclectic.”

Ms. Vallan ought to know, having worked closely with Mr. Landis on two books about his films, one published in Italy in 2003, the second in the United States in 2008. “It was a natural choice to go to him. And we are of course delighted that he said yes.” As a result, the cinema will present Really Funny, a series of 10 comedies, beginning on Sunday with “Sons of the Desert,” a 1933 film starring Laurel and Hardy, and concluding Sept. 22 with Paul Feig’s 2011 comedy “Bridesmaids.”

In an essay on Laurel and Hardy in “Close-Ups: The Movie Star Book,” edited by Danny Perry and published by Galahad Books, Mr. Landis wrote, “Of all the countless comedians, only Charles Chaplin and the team of Stan Laurel and Oliver Hardy were capable of working with equal success in both silent and sound movies.” Beginning in 1921, the duo made 25 silent short films, but did not officially become a team until after their 11th short in 1927.

“Sons of the Desert” was their sixth feature. Directed by William A. Seiter, in 2012 it was deemed “culturally, historically, or aesthetically significant” by the United States Library of Congress and selected for preservation in the National Film Registry.

Lofty praise for a film whose plot revolves around Oliver and Stanley’s determination to attend the convention of their fraternal lodge, the Sons of the Desert, despite the strenuous objections of Oliver’s wife. Oliver hatches a far-fetched plot that actually works, getting them to the convention and almost home again before it unravels.

There are plenty of sight gags and physical comedy, but all emerge from the fundamental innocence of their characters. In his essay, Mr. Landis observes that much of the humor of most comedy teams derives from the characters’ internal friction. “But Laurel and Hardy have a special sweetness about them, a gentle politeness to each other, and it is that which makes them the equals of Chaplin in winning audience affection. . . . Laurel and Hardy are the best, the nice guys of the comic screen.”

Mr. Landis selected only one of his own films, “Trading Places,” the 1983 film starring Dan Aykroyd and Eddie Murphy in what the filmmaker calls “an update on Mark Twain’s ‘The Prince and the Pauper.’ ” While Ms. Vallan, who organized a complete retrospective of

Mr. Landis’s work at the 2004 Torino Film Festival, wanted to show more of

his comedies, she decided to wait until the cinema is up and running before inviting him to Sag Harbor.

Among the titles Ms. Vallan is eager to revisit are “It’s a Gift,” a 1934 W.C. Fields film, Leo McCarey’s “The Awful Truth,” a 1937 divorce comedy with Cary Grant and Irene Dunne, and “His Girl Friday,” the 1940 Howard Hawks screwball comedy starring Grant and Rosalind Russell. “And I like very much that John picked ‘Soapdish,’ a film I remember liking a lot that has kind of been forgotten.”

The series will also feature Mel Brooks’s “The Producers,” Elaine May’s “A New Leaf,” and Larry Charles’s “Borat,” in which “Sasha Baron Cohen literally puts himself in danger for laughs and political commentary,” according to Mr. Landis.

All screenings will take place Sundays at 6 p.m. at Pierson High School in Sag Harbor. Tickets are $10 online and at the door.