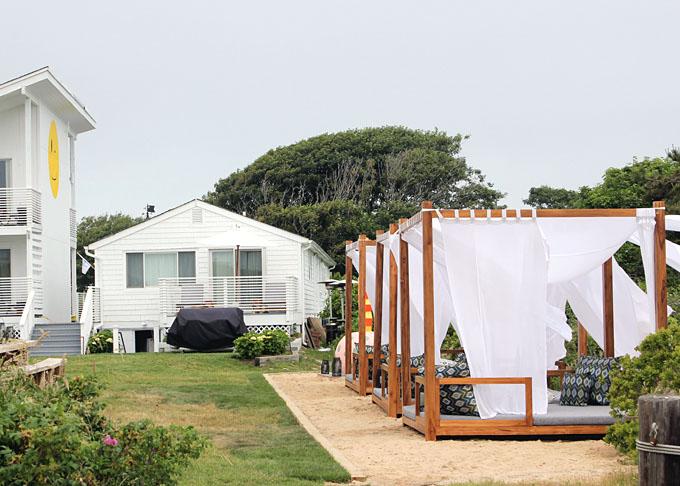 A request by the owners of the Hero Beach hotel to add a restaurant to the property has prompted a discussion of the possible usurpation of public parking there.
By Jamie Bufalino

A proposal from the owners of the Hero Beach Club in Montauk to convert one of three hotel room buildings into a 16-seat restaurant raised questions about how many parking spaces are legally owned by the hotel.

In November, the East Hampton Town Board enacted new parking requirements for resorts and motels. The code says a resort must meet current parking requirements for its principal use (not including pre-existing nonconforming spaces). A restaurant is an accessory use and creating it would necessitate an additional 50 percent of the parking otherwise required. The town planning board has the authority to reduce the amount of parking if existing conditions prohibit it, or if the owner offers mitigation. Hero Beach’s owners are seeking a permit and site plan approval for the restaurant.

The hotel, which features a pool and a more than 10,000-square-foot lawn, is on a corner lot adjacent to Montauk Highway to the north, South Eton Road to the west, and South Emerson Avenue to the south. According to a memo prepared by Eric Schantz of the Town Planning Department, adding a restaurant to the premises would require 43 parking spaces.

Britton Bistrian, a land use consultant for the hotel, told the planning board last Thursday that, according to her calculations, there were 30 existing parking spaces, including 19 in an enclosed parking lot along Montauk Highway, and 11 on South Eton Road. The latter, she said, are all partially in the town right of way, but had been used for hotel parking for the past 70-plus years. “If they existed on our property or partially on our property, I counted them as a parking space,” said Ms. Bistrian. “We can all agree that, if they’re on our property or not, they’ve been used for this hotel since pre-dating zoning.”

The owners are proposing to create 11 additional spaces, she said, which would bring the total to 41. They are asking the board to waive the need for two extra spaces.

Mr. Schantz said, however, that eight of the spaces on the northern edge of the parking lot are partially on Montauk Highway according to a survey. He discounted those as well as the South Eton Road spaces. “It’s my position that these spaces, even if they’re partially on the property, don’t meet the parking requirement, because they’re not full parking spaces,” he said. By his calculations, the hotel has 11 existing spaces and 11 proposed, meaning the board would need to waive 21 spaces.

Board members also differed on the number of existing spaces. Sharon McCobb, for instance, said the eight in the parking lot should be considered hotel parking, even though they had been built in the state right of way. Kathy Cunningham, the vice chairwoman, disagreed. “The right of way is the right of way, it’s public space and it shouldn’t be used for private parking,” she said.

The board ultimately decided it would have to consult with the New York State Department of Transportation, which oversees state roads, and the town’s highway superintendent to determine whether the hotel could claim the space it has been using, or whether it should return to public use. Samuel Kramer, the chairman, said the highway superintendent would also have to weigh in on the proposed parking.

As mitigation for the restaurant use, the owners have offered to replace three existing septic systems with low-nitrogen ones, restrict the use of the hotel’s pool to guests, operate the restaurant only when the hotel is open, restrict food and beverage service to the restaurant and its deck, plus the pool area, and limit parking to hotel guests by providing passes.

They also offered to limit the number of people on site to 200, but several board members considered the number too high for a 30-room hotel. By asking for 200, said Ian Calder-Piedmonte, “almost by definition you’re creating something that’s going to draw people in . . . and then we’re supposed to say you have sufficient parking and I don’t know how we can say that.”