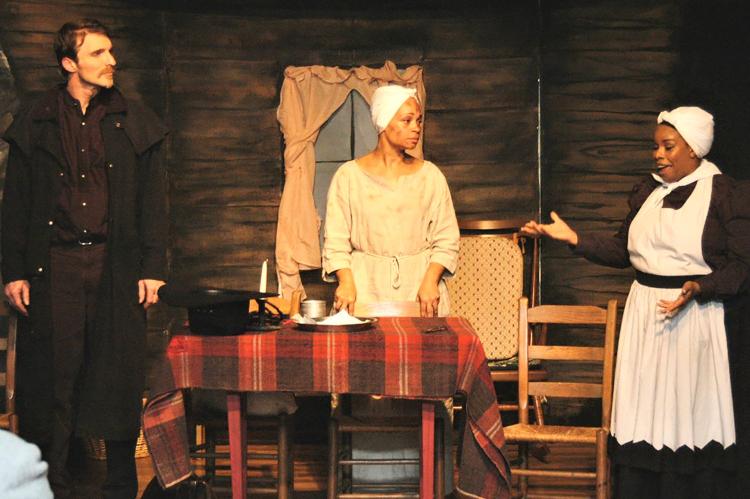 A scene from “Running Scared, Running Free,” a drama based on oral history about the Underground Railroad.
Ward Melville Heritage Organization
By Mark Segal

When the Fugitive Slave Act of 1850 was passed by the United States Congress, abolitionists nicknamed it the “Bloodhound Law” for the dogs that were used by bounty hunters to track down runaway slaves. Not only were runaways pursued, but the law also resulted in the kidnapping and conscription of free blacks into slavery.

The production shows how Native Americans, Quakers, free blacks, and abolitionists assisted in the Underground Railroad through secret codes hidden in quilt patterns as a vital means of communication and enabled slaves to escape from the South to Long Island and north to Canada.

members, Sal St. George, and Georgette Grier-Key, the director of the historical society.

“Running Scared, Running Free” will be preceded by a 7 p.m. performance by the Voices of Virtue Choir. Led by Rachel Blackburn, the choir, which made its international debut in 2007, is a community based choral group that provides talented teenagers, at-risk youth, and young adults living in Hempstead and the surrounding communities with artistic exposure to different cultures.

“It’s a really dynamic play, and the choir is phenomenal,” said Dr. Grier-Key. “This program is part of our ongoing examination of the complexities of slavery on the East End and its many voices.”

She added that Sag Harbor’s Eastville neighborhood, one of the earliest known working class communities composed of African-Americans, Native Americans, and European immigrants, is widely believed to have been a stop along the Underground Railroad and that the founding pastor of the St. David A.M.E. Zion Church, the Rev. P. Thompson, was a noted abolitionist and friend of Frederick Douglass.

A reception catered by Clove and Lace will take place at 6 p.m. Tickets are $55 for the reception, choir performance, and the play, $20 for the performance and play only.