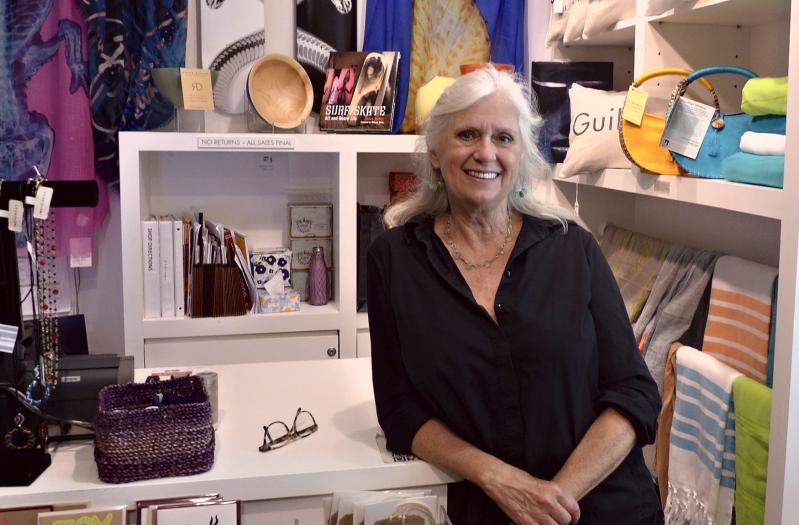 Kathleen Mulcahy, the next mayor of Sag Harbor Village, at work at her other gig as manager of Guild Hall’s gift shop.
Jamie Bufalino
By Jamie Bufalino

Kathleen Mulcahy, who will be sworn in as the new mayor of Sag Harbor Village on Monday, discussed plans for her first months in office, including increasing public participation in government, establishing a new environmental committee, and finding the money to create a village administrator position.

Ms. Mulcahy pulled off a major upset in the June 18 election when she defeated Sandra Schroeder, the two-term incumbent, with 489 votes to Ms. Schroeder’s 197.

“It’s heartening to be able to walk into this with that kind of a mandate,” she said on Monday. “People keep asking me if I’m nervous, and I’m not as ner­vous as I would be if the election had been tight. I really feel like I have the support of the village.”

The focus of her early days as mayor, she said, would be listening and talking to residents. “My first priority is communication, just opening up the gates.”

Ms. Schroeder had changed the format of the monthly board meetings, which traditionally began with a public session. The July 9 board meeting, which will be her first as mayor, will once again start with 15 minutes of public comment, Ms. Mulcahy said. “That will be the first order of business.”

In addition, she wants to institute a monthly work session that will be open to the public.

She will also hold office hours on Tuesdays and Thursdays. “If the door’s open, people can knock and come in, that’s what I want. And if it’s a sunny day, I might be sitting on the front stoop.”

Another priority, she said, will be to fill vacant seats on several of the village’s appointed boards and commissions. “I am being handed a stack of résumés tomorrow, I’ve had a number of people reach out to me, and I’m going to see what I can get done.”

One immediate water quality concern, she said, will be to make sure the filtration system in the drainage ditch at Havens Beach is functioning properly. The “smart sponges” in the system, which reduce bacterial levels in the stormwater runoff to the beach, will soon be replaced. “Putting in the new sponges should help,” she said. “And we need to get the old sponges out carefully, because they’re filled with bacteria.”

She will also be studying the village’s Local Waterfront Revitalization Program, a land and water use plan, for other ways to protect the water. “I will spend the next few weeks really getting deep into L.W.R.P. to find some of the things that can be done lickety-split,” she said. “There’s been so much planning, and so little work done.”

After the summer is over, she will start focusing on putting together a long-term plan for the village, she said.

“In September, I’d like to start the process with a goal of having a plan to talk to the village about by January or February.”

Scouring the budget will be a part of that process, and if she finds enough money to pay the salary for a village administrator, she will seek to fill the position as soon as possible.

The village board on June 11 authorized a $4 million bond to pay for the renovation of Long Wharf. Ms. Mulcahy said she would be looking to see whether a portion of that money could also be used to pay for a village administrator, who, as part of the job, would be helping to manage the project.

“I am going to look at how much of that $4 million is for consultants for the company doing the work, and how much could be used for a village manager,” she said. “I want somebody who’s working for us.”