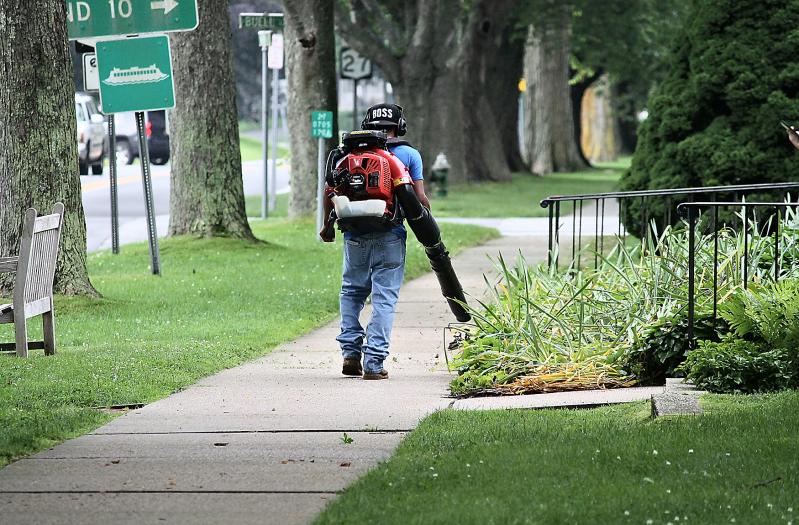 The East Hampton Village Board got an earful from residents and landscapers on Friday about the use of gas-powered leaf blowers like this one clearing off a village sidewalk on Tuesday.
David E. Rattray
By Jamie Bufalino

Residents and business owners weigh­ed in Friday on a proposed East Hampton Village law that would prohibit professional landscapers from using gas-powered leaf blowers from June 1 to Labor Day. The proposed ban includes a provision allowing their use for cleanup after a major storm, or when responding to an emergency.

Golf club and municipal employees who are performing their professional duties would be exempted from the ban. Mayor Paul F. Rickenbach Jr. said, however, that if the law is enacted, the village would not use gas-powered leaf blowers during the summer. “We want to lead by example,” he said.

The latest iteration of the legislation, which would take effect Jan. 1, 2020, includes more severe fines for infractions, but removes the threat of 15 days in jail for violations.

During the public hearing before the village board, several board members said the law was intended to improve quality of life. “The residents of the village have told us in no uncertain terms that they want that tool out of your hands during the summer,” said Arthur Graham, addressing the landscapers in the room.

James LaGarenne, who works at Richard Sperber Landscaping, said he and his colleagues opposed the law. “While we appreciate the board is trying to limit the amount of noise, we find it to be totally arbitrary and premature.”

It was arbitrary, he said, because other machinery used by landscapers and other contractors generates just as much noise. And it was premature because there are no suitable alternatives to gas-powered leaf blowers. His company had recently spent $10,000 on electrical blowers and pruners, and found the batteries deficient, he said.

As for the effectiveness of the electrical blowers, he said, “they just do not work,” adding that they make only a little less noise than gas-powered ones. “It doesn’t make sense from a business point of view to invest more money in a product that can’t produce the work that we need it to do. Shelve this law until the equipment can catch up to what you’re looking to do,” he said.

Mr. LaGarenne also took issue with the golf course exemption. “It should pertain to everybody,” he said.

The board had debated the golf course exemption, but after Kenneth Koch, general manager of the Maidstone Club, explained at an April 4 board meeting why gas-powered leaf blowers were needed to maintain the 206-acre course, the exemption was granted.

Daniel Hays, a village resident who said he found leaf blowers a “constant annoyance,” congratulated the board for the proposal. Rebutting one of Mr. LaGarenne’s arguments, he said a leaf blower ban was warranted even if other machines continued to cause a racket in the village. “That’s like saying you shouldn’t outlaw mugging because people are robbing banks, too,” he said.

Pat Voges, a spokesman for the Nassau and Suffolk Landscape Gardeners Association who said he had been consulting with the village during the drafting of the legislation, thanked the board for listening to the concerns of his organization’s members, and said landscapers would be able to make do with electric blowers during the summer.

A hearing was also held on a proposed law that would require professional landscapers to obtain licenses annually.

A landscaping business would pay an annual $200 registration fee, agree to abide by the laws governing the use of gas-powered lawn equipment, have a valid home improvement license from the Town of East Hampton, and, if applicable, provide proof that it has the necessary state and county certification to use pesticides, other regulated chemicals, or fertilizers.

Once the village administrator determined that a business had met all the requirements, a $10 registration sticker would be issued. The sticker must be placed in a conspicuous location on each vehicle used by the company.

Mr. LaGarenne expressed doubt about the proposal because, he said, the town’s law requiring licenses for home improvement contractors has not prevented unlicensed firms from doing business. “Many contractors coming from UpIsland and elsewhere do not have the license, and there’s no enforcement, so why get the license?” he asked.

Mayor Rickenbach assured him that in the village, there would be “equitable and uniform enforcement” of the licensing law.

The sticker, meanwhile, was a sticking point for Bill Fox, the owner of Bill Fox Ground Maintenance. “I’m going to have, like, 15 stickers on my truck. I’m running out of room for stickers,” he said.

The public hearings on both proposed laws will continue at the board’s July 31 meeting.

A hearing will also be held that day for a proposed law to limit roof heights on houses. The area of low-pitch roof within nine feet of the maximum roof height permitted per lot size, it states, must be no more than 15 percent of a house’s gross first-floor area.

In other business, a $1.5 million bond to pay for building a fire protection and ambulance service facility in Northwest Woods was authorized.

The board presented Scott Fithian, the superintendent of the Department of Public Works, who is retiring on June 30, with a proclamation honoring his 34 years of service to the village. David Collins was appointed the new superintendent; he will start on July 1.

The approval of the Village Fire Department’s request to hold the annual fireworks display on Aug. 17 elicited a reaction from Randy Johnston, who said he had recently become a village resident. He questioned whether the board was aware of the negative environmental impact of fireworks, including noise, air, and water pollution.

“I understand what you’re saying, and I don’t subscribe to what you’re offering,” said Mr. Rickenbach. “Once a year we celebrate what our nation is all about, and part of it is the enjoyment of fireworks, and some boom-boom up in the sky. I think it’s wonderful.” He also pointed out that the village waits to schedule the fireworks display until town trustees say it is safe to hold it when the piping plover nesting season is over.

Mr. Johnston had another complaint about the village’s attention to environmental issues. He was dismayed that there are no trashcans for recycling in the commercial district. “That’s a real sad state of affairs,” he said.

“Point well taken,” said Richard Law­ler. “But there are recycling cans at all the beaches.”