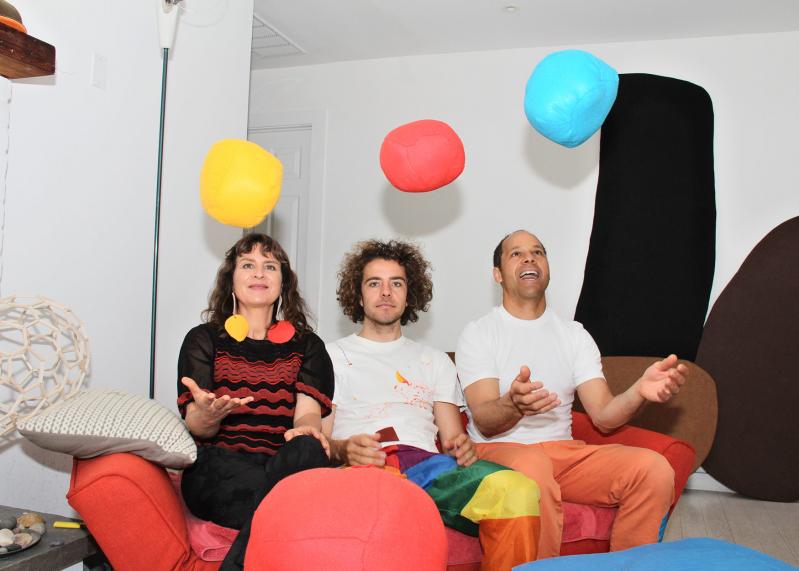 Saskia Friedrich, Mamoun Friedrich-Grosvenor, and Jeremy Grosvenor needed to blow off steam after an hour’s discussion about art, science, and an ecologically imperiled world.
Durell Godfrey
By Mark Segal

The nature versus nurture debate has customarily involved the extent to which behavior is a product of genetic or environmental influences. The psychologist David Moore, author of “The Developing Genome” (2017), argues that the contest between genes and experiences “is a faulty way to think about the situation, because it’s not true that genes do things independently of their contexts. . . . Nature and nurture are always working together to produce all of our traits.”

A visit to the home of Jeremy Grosvenor, Saskia Friedrich, and their son, Mamoun Friedrich-Grosvenor, 23, in northern Sagaponack provided an object lesson of sorts, specifically with respect to the behavioral trait of creativity. All three are artists, although there are distinct differences in how they think about art and characterize their practices.

Jeremy has made artworks and has exhibited at the Tripoli Gallery in Southampton but, as he put it, “I’m very slow-paced. My base was more about visual studies, like filmmaking and video, but I’ve been procrastinating about that for a long time.” His conversation is peppered with references to figures from the world of avant-garde film.

Saskia often works with solid-colored fabrics she cuts and arranges in abstract compositions on planar surfaces. She has also created sound pieces, three-dimensional sculpture, and site-specific works, one of which was a floating fabric installation as part of a Parrish Road Show project at the Art Barge in 2015. Three years later, as a Watermill Center resident artist, she developed a multimedia project consisting of video, music, small felt sculptures, and wall pieces of various materials.

Mamoun has created objects, a solar balloon project among them, and music, but his practice and thinking are heavily intertwined with science and scientific theory. He studied microbiology at Colorado College for two years before transferring to New York University’s Gallatin School of Individualized Study, where he has formulated his own area of concentration.

It is impossible to discuss creativity with the family without including Jeremy’s and Saskia’s parents in the conversation. Jeremy’s father, Robert Grosvenor, is a sculptor, and his mother, Jackie Grosvenor, a painter.

“My world was on the cusp of Chinatown, Little Italy, and Greenwich Village. We lived in a very simple loft. My mom was drawing and painting all the time, and my dad was working in a studio in Williamsburg, where I’d go every day to play. He encouraged me to make things that I liked, and to look at things differently. I was really fond of how my parents saw things, and I still am today.”

Saskia’s parents, Heiner and Six Friedrich, opened an influential art gallery in Munich in 1963 that featured early examples of Minimal Art, Land Art, and Conceptual Art. In 1972 Heiner moved to a space in SoHo in New York City and, in 1974, co-founded the Dia Foundation. Six is currently partnering with her son, Max Weber, in the Galerie Max Weber Six Friedrich in Munich.

Saskia lived in Germany until she was 15, when she moved to New York and studied dance, acting, and attended the New School before gravitating toward making art and attending the School of Visual Arts.

“My background is total immersion in art. My parents’ main influence was that I experienced art early in in my life and got to witness a lot of it. They impressed on me a deep reverence and love for art, and in turn I have forged a deep love and communion with art.”

“I’m similar to my parents,” said Mamoun. “When you grow up in a certain setting, that’s the norm to you. I’ve always enjoyed the way I’ve grown up, the way I’ve become me.” However, he did say that when he was younger he rejected the idea of producing something called art or realizing an object in that context.

“I’m becoming more of an artist now than before,” he said, “although I still see myself as an inventor. There is no real line between being an artist and an inventor. As an artist, I’m interested in how things fail. You learn from the way in which something didn’t work.”

The discussion turned to the nature of art and its relationship to functionality and science. “Mamoun always said he wanted to make functional things, things that have a purpose,” said Saskia. “I don’t have that need so much, but I like ideas that have potentiality, that things could work for humanity or the world or have a purpose of enhancing our consciousness.”

“You need the perspective of science to make art that is at least sustainable or that merges with the ecological reality in which we live,” said Mamoun, “and in science we need artistic or creative perspective to know what the goal is of the science that you’re doing. For my personal practice, the role of art is to shape the scientific method with an idea of holism in order to enhance the human relationship to the world and to augment that relationship through the inclusion of other organisms in an ecological tapestry.”

Saskia concurred. “I feel more than ever that artists, thinkers, scientists, everyone is needed to come up with a new language, a new way, a new symbiosis of some sort. We need to find new levels of community.”

Jeremy weighed in. “When I look at things or am creating things, I’m not really thinking about what either of you are saying. I relate to it, and I understand it. But I’m thinking about Neanderthal things, very simple concepts, like green and yellow.”

He went on to say, “I’m thinking about, besides green and yellow, how people look at things.” In 1992 he spent time on Faraulep Atoll in the Caroline Islands working with an anthropologist on a video project about the daily lives of the people there and how they viewed the world. The resurrected footage will be released on Instagram and Facebook as “People of the Open Sea.”

Manoun’s creativity manifested itself early on. “When he was 2, he was painting,” said Saskia. “When he was 6, he created a world. He worked on it for two years. We recognized he was extremely creative. We decided to give him a lot of space and time rather than impose things. It was a very conscious decision, which was informed by a lot educational and child development literature that I had been studying for a while.”

His early education included a year at the Hayground School in Bridgehampton, home schooling, and the Brooklyn Free School, whose mission is to “engage students and staff in democratic decision-making and problem-solving” and to “facilitate student-centered learning through play and exploration. . . .”

“If somebody wanted to make something or pursue an idea, it was fully encouraged,” said Jeremy. “A 17-year-old could work next to an 8-year-old if they were thinking of the same thing, even though they were physically so different.”

Mamoun recently presented at the Biodesign Challenge at the Parsons School of Design. His project is “arbor sculpture playgrounds for urban environments,” or playgrounds grown out of living trees that are grafted together. His was one of 36 projects from universities and incubators selected from among 400 candidates for presentation.

Coincidentally, many months after the idea for this article emerged, Jeremy, Saskia, and Mamoun were invited to create an exhibition by Auto Body, a curatorial collective based in Bellport with access to a large garage next to a working gas station and an outdoor space called the Post-Morrow Foundation.

“We are making individual works and will let them resonate with each other,” said Saskia. “It will be a big experiment for all of us. Quite a bit unknown and yet deeply symbiotic.” The show will open on Saturday with a reception from 6 to 9 p.m.