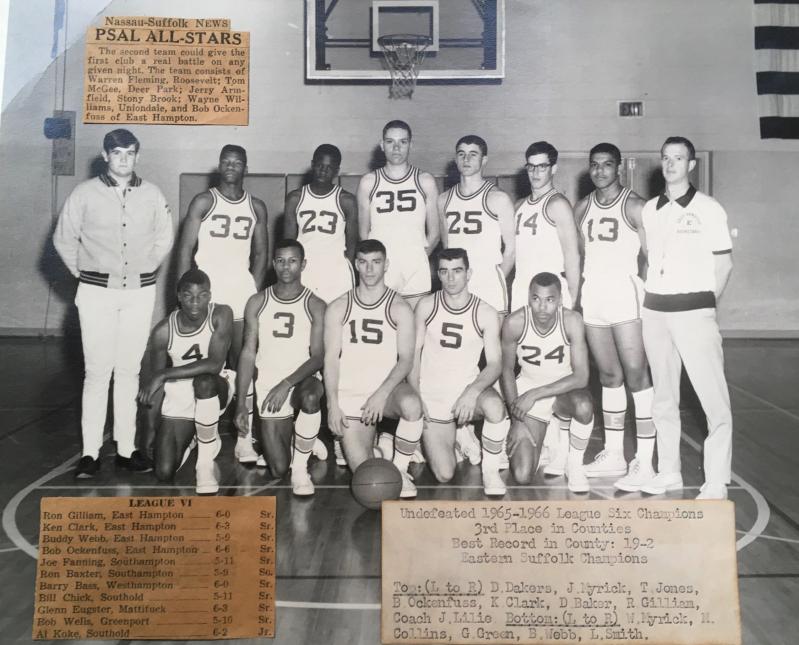 The 1965-66 East Hampton High School boys basketball team’s 19-2 record was the county’s best. The team reached the semifinal round of Suffolk’s open tournament, the furthest an East Hampton basketball team had gotten to that point.
Courtesy of Bob Ockenfuss
By Jack Graves

Two coaches, Bill Herzog and Kathy McGeehan, two individual athletes, Emily Hren and Nicole Fierro, and the 1965-66 boys basketball and 1993 field hockey teams are to be inducted into East Hampton High School’s Hall of Fame at homecoming on Oct. 5.

Rich Schneider, the Hall of Fame committee’s chairman, made the announcement at the senior awards ceremony at the Clubhouse on June 12.

Herzog, who has coached various sports, including track, basketball, volleyball, and football during a half-century career here, said during a conversation at The Star Monday that it had been “a good run . . . I was really, really lucky. A coach is only as good as his or her team, and I had a lot of good ones,” seven league championship teams in spring track and three league champions in winter track among them.

His coaching record is said to be second only to Ed Petrie’s in East Hampton annals.

When this writer, who first wrote that he was retiring a decade ago, asked if it were really true this time, Herzog smiled. It could be said that he was retired, he said . . . for the time being at any rate. And no, he was not moving to Florida — his wife, Deirdre, liked it here too much.

McGeehan, the coach of many undefeated girls volleyball teams here in a 38-year career, at least seven the last time she checked the banners on the gymnasium wall, is also retiring from coaching, she said during a telephone conversation Friday, though she will take 10 players to a Penn State camp in mid-July, and will volunteer this fall.

A gymnast (“anything but the bars”) at Hof­stra, McGeehan coached six league-champion gymnastics teams here from 1988 to ’96, when gymnastics was a fall sport and girls volleyball was a spring one. When girls volleyball’s season was moved to the fall, in 2000, she ceased coaching gymnastics. “Gymnastics,” she said, “is a tough sport to set up for — toting the balance beam on my back was taking a toll on my body.”

The 1965-66 school year was a good one for Bonac sports in general. “The football team is already in the Hall of Fame,” Bob Ockenfuss, the boys basketball team’s center, said in a telephone conversation Monday. “I think we had championship teams in football, basketball, wrestling, and golf that year — maybe baseball too.”

The basketball team, the eastern Suffolk and undefeated League VI champions, sporting the best record in Suffolk at 19-2, “advanced further in the open county tournament [to the semifinal round] than any previous East Hampton High School basketball team.”

“We lost to Center Moriches and then won 18 in a row,” Dick Baker, a teammate of Ockenfuss’s, recalled.

The ’93 field hockey team, coached by Ellen Cooper, was the overall Suffolk champion, the Long Island Class C champion, and a state semifinalist.

Asked how she had gotten into high-jumping, Herzog said, “She just went over to the pit and did it, the Fosbury Flop. I asked her where she’d learned how to do it and she said she’d seen it on TV. . . . She was a very, very smart girl. She’d just stand there and watch everyone else, as we were telling her to go into the shade and drink some water, and then go out and top them.”

Earlier this spring, in writing of the softball team’s new coaches, this writer proved prescient in saying that Nicole Fierro, like Annemarie Cangiolosi Brown, Melanie Anderson, and Mylan Le Eckardt, was a Hall of Famer. She wasn’t then, but effectively is now.

A great soccer goaltender and third baseman in softball, Fierro, who coaches East Hampton’s junior varsity softball team, went on to the play soccer at Long Island University’s C.W. Post campus, where she was goalkeeper of the year, first team all-conference, second team all-region, and the team’s most valuable player in 2012.

In her senior year here, 2009, the three-sport (basketball in addition to soccer and softball) athlete won the Paul Yuska award, the athletic director’s award, and the Mae Bushman outstanding female athlete award. She won most valuable player awards in all three sports, and, in her senior year, was first team all-state and field player of the year in softball. Moreover, she was all-county in soccer and softball, and all-league in basketball.