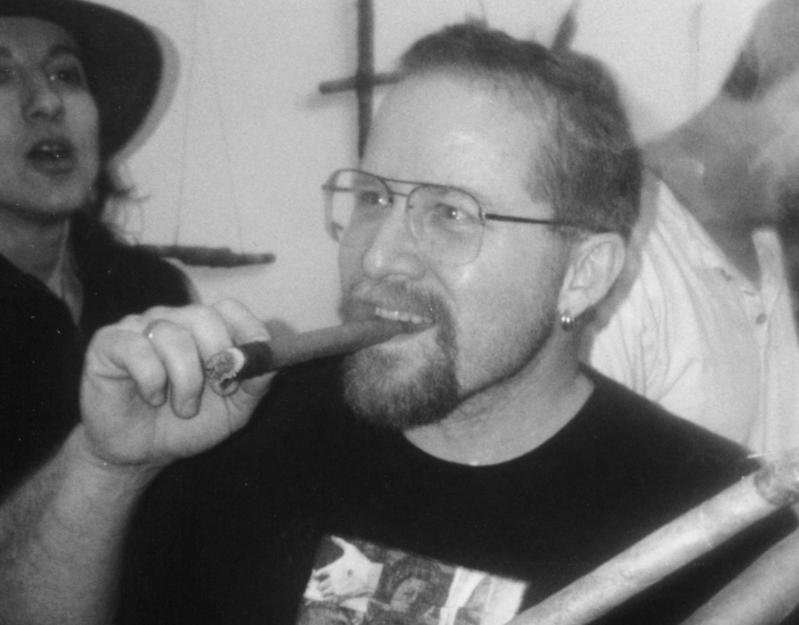 It is not hyperbole to say there was nothing Chick Bills could not make, fix, or take apart. The East Hampton artist, fabricator, and polymath died at North Shore University Hospital in Manhasset on May 5. He was 68 and had been in poor health since a heart attack more than three years ago.

Mr. Bills, Charles G. Bills on his driver’s license, was known to nearly everyone as Chick. He had been in and around the East and West Coast art worlds since the 1980s.

Mr. Bills and Christine Lidrbauch, an artist as well, were married on Sept. 28, 1995. They lived in New York City, where in addition to his photography and her drawing and painting, the nearly inseparable couple worked as art installers.

One notable project was the 1993 installation of Katharina Fritch’s monumental “Rat-King” at the Dia Foundation in New York City. Ms. Lidrbauch recalled the complex task of creating a plaster mold to resin cast where the nine-foot-tall rats’ tails came together in a knot. Other work included Damien Hirst installations at the Gagosian Gallery and once troubleshooting the European motors that would often fail in the process of moving two halves of a slaughtered pig in formaldehyde past each other in sliding vitrines.

A natural engineer, as Ms. Lidrbauch put it, Mr. Bills was gifted at solving problems large and small, such as getting dark shipping stains off some Hirst animal skeletons right before a big Manhattan opening. “Don’t be afraid to try it,” could have been his motto, she said. He worked with fiberglass, steel, concrete, foam, and just about anything he or a client artist could come up with.

In the 1990s, Mr. Bills and Ms. Lidrbauch lived aboard a sailboat docked off Jersey City, but when it came time to move onto dry land to take care of Mr. Bills’s ailing mother, the couple eventually bought a house in the woods on Old Northwest Road in East Hampton.

The new property was an art project itself, more of a creation than a building. Work for other artists continued, including restoring a Larry Rivers “Legs” sculpture — not the set in Sag Harbor — making them more durable and weather resistant for an outdoor location. The boat on which the couple had lived in New York Harbor sat in its cradle near the house, as projects, personal and not, continued.

In his own later work, Mr. Bills experimented with blending weapons and other military hardware into ironic, sometimes dangerous constructions — a rifle with a sword welded where a bayonet should be, a “suicide helmet” that would surely kill its wearer with a single shotgun shell, two guns joined so that firing one would blow up both. Ms. Lidrbauch explained that the message of this work was the ineffectuality of violence.

Mr. Bills could trace his family lineage to the Norman Invasion. He enjoyed being descended from the Vikings, Ms. Lidrbauch said.

He cut a singular figure in East Hampton, known for wearing mid-calf Ugg boots and bicycle shorts to parties or openings and driving around in a pickup truck that had been splatter-painted à la Jackson Pollock, albeit with more color and obvious exuberance — though it had an element of an extended middle finger at pretentious Hamptons sensibilities as well.

Mr. Bills was born on Nov. 26, 1950, in Elizabeth City, N.C., to James Ford Bills and the former Sheila Coffin. As a son of a member of the United States Coast Guard, there was really no place that he considered a childhood home; posts included Bethesda, Md., Guam, Hawaii, Seal Beach, Calif., Traverse City, Mich., and Cleveland, where, in his teenage years, he developed several long-term friendships and raced sailboats at a high level of competition.

He attended the Cleveland Institute of Art, where he earned a degree in painting, and the San Francisco Art Institute, where he received a master’s in photography. Professionally, he was self-employed, calling his dual careers Dodge Studios and Silverback Art Services.

In addition to Ms. Lidrbauch, he is survived by a sister and brother, Linda Bills of Philadelphia and Terry Bills of Ketchikan, Alaska. Memorial gatherings for family and friends will be held this summer in some of the places Mr. Bills lived.