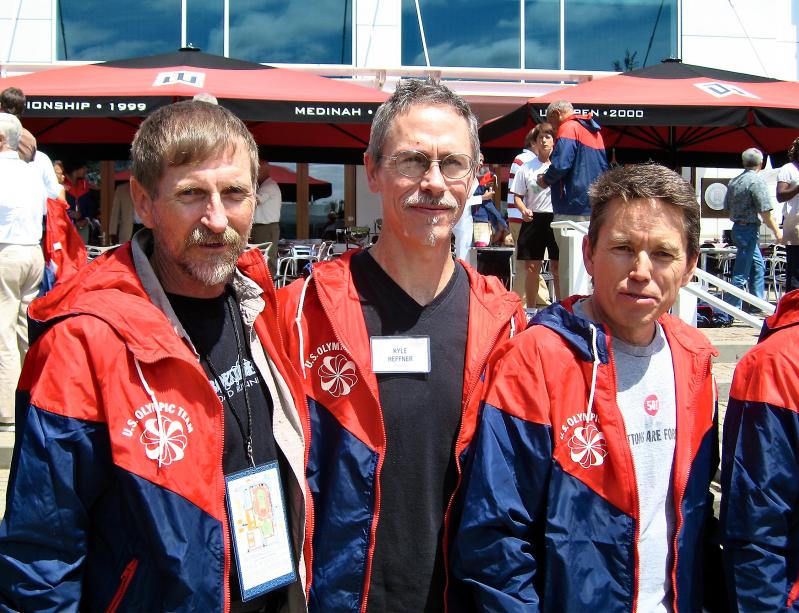 The 1980 Olympic Trials’ top three, Tony Sandoval, the winner, at right, Benji Durden, the runner-up, at left, and Kyle Heffner, the third-place finisher, were the honorees at the U.S.A. Track & Field championships in Eugene, Ore., in 2008. Their 1980 times, all personal bests, reportedly still stand as the fastest top three times in Olympic Trials history.
Steve Sellars
By Jack Graves

Of the nine long-distance running legends coming to Shelter Island this weekend, a list headed by Joan Benoit-Samuelson and Bill Rodgers, two of the nine, Benji Durden and Kyle Heffner, who made the Olympic marathon team to nowhere in 1980, will be on The Rock for the first time.

Durden, 67, of Boulder, Colo., once ran a 10K in 28 minutes and 36 seconds, one tick faster than Simon Ndirangu, who holds the course record, ran at Shelter Island in 2012. “Though I won’t do that,” he said assuredly during a telephone conversation this past week. “I’m hoping for a 46 or a 47.”

International politics in the form of a boycott by the United States of the 1980 Olympics — Russia not having met President Carter’s deadline for withdrawing from Afghanistan — intervened when Durden and Heffner were in their ascendance as long-distance runners.

While they knew that that year’s trials, in Buffalo, would be moot insofar as the Olympics went — the reportedly grudging decision by the International Olympics Committee having been announced beforehand — Durden and Heffner, who did not know each other at the time, were each, as Heffner said, “game.

My goal was to make the team — I thought there was just as much honor in that,” Heffner said.

Ditto Durden. “The disappointment we’d felt was over before the trials. We knew we weren’t going to go anywhere, but the trials were the national championships. There was a reason to do your best. Kyle and I were considered up-and-comers, but not given much of a chance. We each ran our best times that day,” a 2:10:40.3 in Durden’s case, a 2:10:54 in Heffner’s.

Tony Sandoval, who overtook Durden in the 22nd mile, won the race, in 2:10:18, a personal best, as were Durden and Heffner’s times — Durden’s by three-plus minutes. Their times reportedly still constitute the fastest posted by the top-three in Olympic Trials history. Moreover, 56 runners went under 2:20 in those trials, another record.

Heffner, despite the 2:14:30 he ran in winning the 1979 White Rock Marathon in Dallas, was “not on any of the pre-race lists, not a contender, not a dark horse, not even among those considered to have an outside chance.” He had been training at altitude in the Rockies in the months leading up to the race, so “Frank Shorter knew [he was in tip-top shape], Herb Lindsay knew, and Stan Mavis knew,” but apparently few others.

Heffner, by the way, is in the running when it comes to “an odd world record,” one having to do with the time span over which a marathoner has run a sub-three-hour time. His span, which began at 16 when a high school cross-country teammate suggested they do one — “What’s a marathon?” he remembers saying — extends to 47 years at the moment, putting him, he thinks, around fourth on the worldwide list. Another sub-three and he would be at the top.

At Boston in 1983 Durden ran his best time, 2:09.57, in finishing third, despite straining the plantar fascia tendon in his left foot. Not long after, in winning the Toronto Marathon in 2:15, he completely tore the plantar fascia in his right foot, an injury from which he said he never fully recovered. “I never ran faster than 2:18 after that . . . at 40, I completely tore the other one.”

From the age of 40 to 54, Durden, who has run 133 of them to date — in contrast to Heffner’s “20 or 25” — ran no marathons, though he, with his wife, Amy, remained involved with runners and running given their race-timing business.

As for the 1984 Olympic Trials, in which Heffner competed, Durden’s plantar fascia woes “put an end to that . . . you can’t rewrite history.”

“I run as hard as I can, but now running is more of a social event for me — it’s the social environment I most enjoy.”

Durden and Heffner, who has also experienced physical setbacks — an inevitability, presumably, when it comes to distance running over the course of many years — stand as exemplars of excellence and persistence.

Asked what they loved about marathoning, they agreed that you tend to like what you’re good at.

“It’s not easy,” said Heffner, who is an exercise physiologist. “It’s self-sacrificing. There are times when you say, ‘What am I doing?’ But when you excel in a sport it’s reinforcing.”

When this writer said to Durden that he’d never met a runner he didn’t like, he replied, “Oh, I’ve met one or two jerks.”