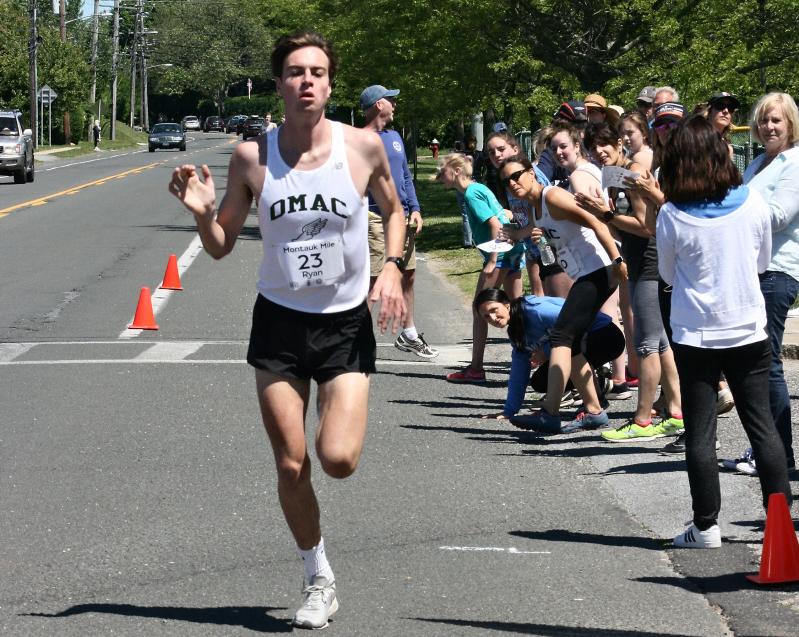 Engstrom won the women’s race — along Edgemere Road, from the firehouse to Lions Field, in 5 minutes and 47.58 seconds; Fowkes won the men’s race, which followed a half-hour later, in 4:53.21.

Interestingly, Fowkes’s time was just about what the 84-year-old Conner, a mentor to young runners here, ran in setting a 55-to-59-year-old world record in 1990.

Undoubtedly the tall, slim East Hampton senior, who has run the 1,600-meter race in 4:18.44 this season, would have run faster that day had Kal Lewis, a Shelter Islander, showed up. But Toby Green, Lewis’s coach, who was there to support Emma Gallagher and Isabella Sherman, two Shelter Island cross-country and track runners, said Lewis has been more or less floored by respiratory problems of late.

Lewis placed seventh — and Fowkes third — in the recent state qualifier meet at Comsewogue High School, but nevertheless qualified for the state meet inasmuch as he was the top small school finisher.

At the state meet, in Middletown, on Saturday, Lewis, the defending Class D champion, ran a 4:22, said Green, who added that “the winner ran a 4:10.”

His son, Joshua, a Farmingdale student who is the Sky Line Conference’s cross-country and 800 champion, had been experiencing similar problems, said Green, who added, when asked if Lewis, a junior who has run the 1,600 in 4:15, had any specific goals for next year, “not at the moment — he’s resting after a long season, a long year. We’ll come up with goals at the end of the summer.”

The women’s race top five were Engstrom, Bella Tarbet, Beth Feit, Gallagher, and Emma Hren. Engstrom, Tarbet, and Hren are East Hampton teammates. Feit, who took to heart Conner’s pre-race advice to go out hard in the first 800 meters, hold on, and then invoke the Holy Ghost in the final 400, is 49.

“I stayed with the girls!” Feit, whose 6:20.85 bettered last year’s time by five seconds, enthused. The long-distance runner confessed that she “did have something left at the end,” and that, consequently, she might be able to lower her mile time even more in the future.

It was tricky, said Conner, who was seated in a wheelchair near the finish line — start your final kick too soon and you’d pay. “You get into unknown territory with oxygen debt — you can hit the wall in the mile — but if you’re in shape it will carry you through.”

“People were really nervous at the start, more nervous than they probably would be at a longer race, a 5K say,” said the 58-year-old Paul Hamilton, a former county champion in the distance, who coaches young runners here, and who came in under 6, at 5:49.23, which he said had been his goal. In high school, he said, in reply to a question, he ran the distance in 4:17.

The starting line jitters probably were owing to the fact that “you get into the pain pretty quickly in the mile.” If one weren’t invoking the Holy Ghost at the end, something was wrong, he said, agreeing with Conner. The weather, he said, couldn’t have been better.

As aforesaid, Fowkes, who is to run in the New Balance national steeplechase race this week, was the men’s race winner, leading a field of 36 (there were

Engstrom, Tarbet, and Hren, by the way, all were in agreement that the steeplechase, which requires that its contestants repeatedly get over barriers and a water jump, was their favorite.

Another absentee that day was Erik Engstrom, East Hampton’s former county cross-country champion, who, his father, Gerard, said, was working that morning at Deep Hollow Ranch. Engstrom, who won this race when it was revived two years ago, has another year to go at the University of Massachusetts, where he’s running cross-country and track.

Working at Deep Hollow would be good for his running, said Hamilton, who added that, beginning this week, Engstrom and Perez, a SUNY Oswego junior majoring in wellness management with a minor in athletic coaching, will oversee Monday and Wednesday 6:30 p.m. workouts at the high school’s track.