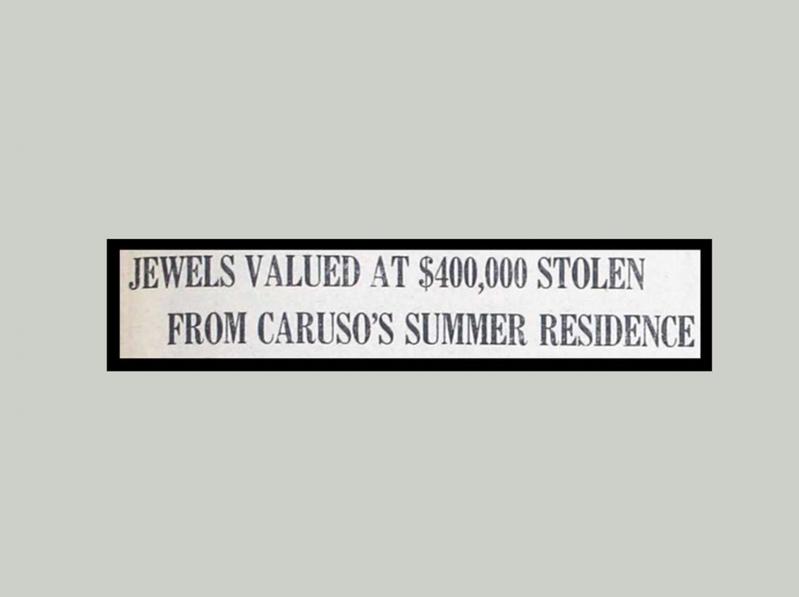 A headline from the June 11, 1920, issue of The East Hampton Star
By Gina Piastuck

Whether or not you enjoy opera, chances are you’re familiar with Maria Callas, the Three Tenors, and Enrico Caruso.

Born in Naples, Italy, in 1873, Enrico Caruso’s career predates the former performers, spanning 1895 to 1920. As one of the first global media sensations, Caruso appeared in numerous newspapers, books, magazines, and newsreels. He served as the lead tenor for New York City’s Metropolitan Opera for 18 consecutive seasons in more than 850 performances, and was heard live onstage during the first public radio broadcast transmitted in the United States.

In addition, Caruso produced over 250 commercial sound recordings, which helped to bring opera music out of the opera house and into the ears of the general public.

As can be gathered, Caruso was quite famous, and, as with his profession, drama followed him everywhere. In 1906, he was fined $10 for pinching a woman in the Monkey House at the Central Park Zoo. In 1910, an extortion racket known as the Black Hand sent Caruso letters demanding money while threatening to damage his voice or hurt his family. The perpetrators were eventually arrested.

In 1918, Caruso eloped with Dorothy Benjamin, who was 20 years his junior. She was the daughter of Park Benjamin Jr., a patent lawyer and writer, who used to rent the W.S. Everest cottage on Buell Lane in East Hampton. The marriage was not consented to, as Dorothy’s parents stated to the press.

Following their marriage, the Carusos rented the Creeks on Georgica Pond for the summer. At 10:30 p.m. on June 8, 1920, a burglary occurred there, and a strong box containing an estimated $400,000 worth of Dorothy’s jewelry was stolen from her bedroom. The Carusos’ chauffeur chased down the sound of an alarm attached to the jewelry box while firing a revolver. The box was eventually discovered on the lawn, with most of the items missing.

The burglary was believed to be an inside job, as Dorothy told police she had let two servants go before the incident. The chauffeur was also suspected in the case.

Later that year, a suspect was apprehended in a trap arranged by the police and two sisters, Katherine and Charlotte Poillon, who said a man named Harry C. Toback had offered to sell them $45,000 worth of unset diamonds from the Caruso jewels.