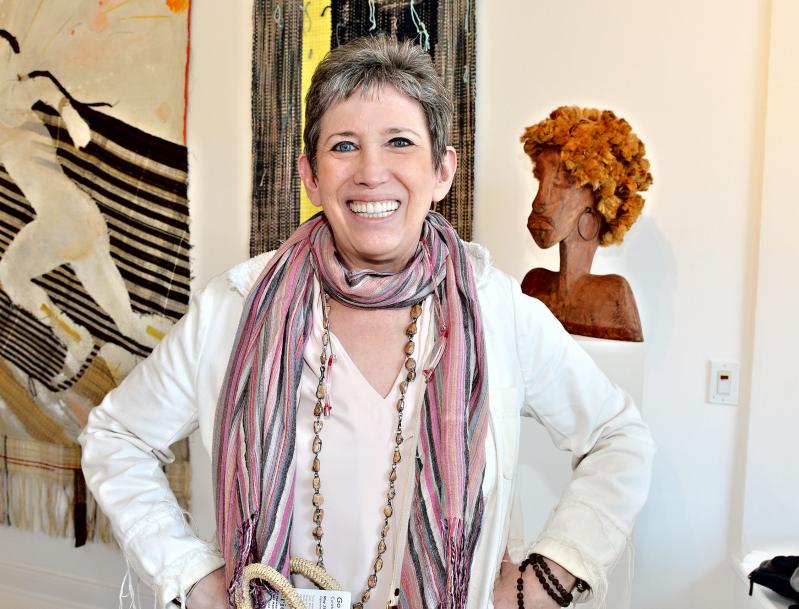 The exhibition title “Go Figure” at the Eric Firestone Gallery in East Hampton has multiple meanings, which suits an exhibition that exuberantly presents a plethora of ways to address the genre of figurative art.

Often double and even triple hanging, the show appears to be a salon-style exhibition from afar, but once inside, cohesion becomes readily apparent. Beth Rudin DeWoody, a collector known for her discerning eye and ability to launch artistic careers just from a single purchase, served as curator. She brought together artists who came of age in the mid-20th century, many from the Firestone inventory, with contemporary artists.

For years she had a house in the Shinnecock Hills artist colony enclave and is well familiar with the artists who have lived and worked here over the decades. Her own collection tops off at 10,000 objects, the range of a mid to large-size museum. She clarified in a phone conversation last week that “not all of those objects are hangable art, some are books or other things.” Yet it is significant enough for her to have bought a 20,000-square-foot building in West Palm Beach, Fla., to store the collection and show it.

She’s enjoying showing her collection in the building she named “The Bunker” so much that she has bought another warehouse to serve primarily as storage. “It’s been so great. I’ve pulled out things I haven’t seen in ages. I get frustrated when I can’t see everything out.”

Although The Bunker is staffed with a team of curators (Phillip Estlund, Laura Dvorkin, and Maynard Monrow), she enjoys working with guest curators and putting together exhibitions herself. That is why she said yes when Mr. Firestone asked her to work on this show with only a couple of months’ lead time. She enlisted Ms. Dvorkin to help bring things together.

Beginning with a core of artists she loves, such as Martha Edelheit, Mimi Gross, and Marcia Marcus, “I tried to think about artists I had known, collected, or seen that might be good matches for those.” She thought of Emma Amos’s work in this context and then Diedrick Brackens’s fiber works naturally followed. Their pieces hang together organically and work exceedingly well with Ruby Sky Stiler’s free-standing “Figure From Parts, Past and Present,” a foam, acrylic resin, and thermal adhesive sculpture.

The show has a set of anchor pieces, large canvases or other supports that tend to dominate the section of wall on which they are placed. Mr. Sullivan’s “Angela and Jean-Claude” is one such work, a portrait of two people sitting at a table. His work often gives off a tension between the studied look of being formally posed and the immediacy of a snapshot, which this painting also demonstrates. His subjects have an animation that jumps out at viewers, as if they were in the room with them.

The painting is surrounded by a tiny Alex Katz collage of a black cat set on a checkerboard field of blue and white, Liz Markus’s “Nancy in Galanos,” an Eric Fischl digital print, and Joan Brown’s “The Colonel in the Garden of Allah.” The works of Mr. Fischl and Ms. Brown are larger than Mr. Sullivan’s painting, but his matches their impact and holds its own in the way that the smaller works of Ms. Markus and Mr. Katz do as well.

This particular segment, a favorite, illustrates the strength of the show. There are few if any placeholders in the mix. Every work makes its worthiness evident in a way that taking one away might cause the whole to tumble.

“I’m happy with the way it came out,” Ms. DeWoody noted. “It’s very dense.” She said placing the de Kooning portrait of Scott Chaskey and King’s sculpture, which both feature subjects with red hair, with Walter Robinson’s “For Hearth and Home,” a painting on a plane’s nosecone, was a choice that became obvious once the works were in the room together. “Some things you don’t know until you get there.” She said it took only about two hours to arrive at the final installation.

“I’m not a taught or scholarly curator. For me it’s a hobby,” she said. “A lot of curators will make models and measure out how things will hang. I do it from my eye.” She said she would never pretend that her approach is the same as that of a highly trained curator, but it is her intuition that brings a fresh perspective and liveliness to the space. “It’s from years of collecting and hanging my own art.”

The exhibition remains on view through June 22.