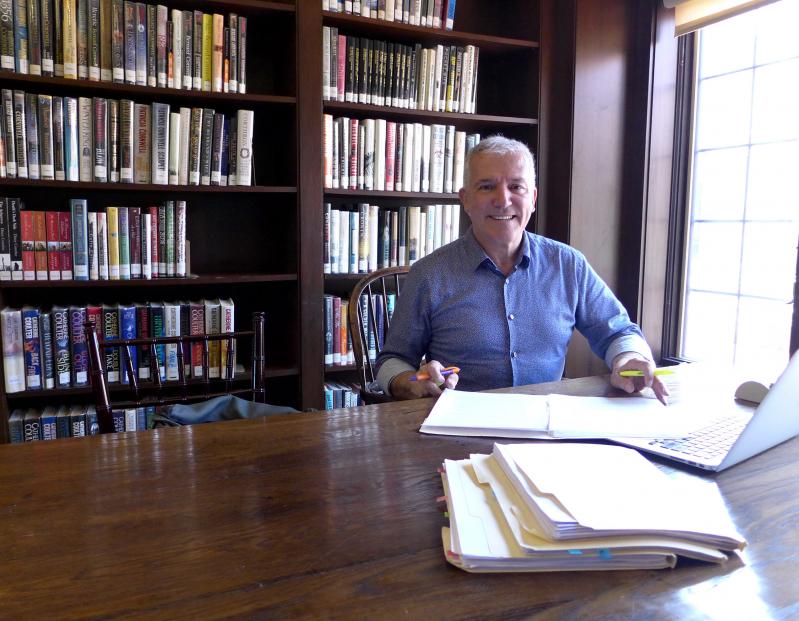 Andrew Visconti prefers writing in the East Hampton Library to working at home because he can get his work done there without feeling isolated or distracted.
Mark Segal
By Mark Segal

When he was a 10-year-old growing up in Milan, Italy, Andrew Visconti knew that he wanted to be a journalist. His father, an engineer and businessman, had other ideas. “He didn’t quite understand the business of writing,” Mr. Visconti said recently in the garden of the East Hampton Library. “For him, it was ‘What kind of job is that?’ ”

It turned out to be the kind of job that has kept Mr. Visconti busy for some 35 years, during which he has been the American correspondent for the news syndicate owned by the publishing group of La Repubblica. While he has covered presidential campaigns, traveled with Luciano Pavarotti to Guatemala, and interviewed notables ranging from Mikhail Gorbachev to John Updike to Joan Baez, there is one thing he hasn’t done until recently.

“For more than 30 years, I have always stayed away from being part of the story. For a journalist, the first time you allow yourself to use the pronoun ‘I’ in your writing, it’s scary. Now that I’m writing a memoir, I am part of the story, so it’s an extraordinary new chapter in my life.”

Mr. Visconti’s memoir is not his life story but rather an examination of a particular relationship and its effect on him. He maintains that memoirs are not only for the famous. “Everybody has an important story to tell. It’s just a matter of finding that story, finding that voice, and focusing on one aspect. And the element most essential to memoir writing is honesty.” Beginning on June 24, Mr. Visconti will teach a six-week course in memoir writing at the East Hampton Library.

While his father did not especially appreciate journalism, his business took him all over the world, and he valued languages. “He could switch from English to Spanish to French to German to Italian with ease. So I grew up bilingual. I started speaking English at the age of 3.”

Mr. Visconti studied political science at the University of Milan, because in Italy at that time there were no journalism schools. It turned out that as a journalist he has often had to draw upon what he learned as an undergraduate, which included not only political science but also the lure of travel.

With other students, he drove by car one summer from Milan to the Sahara Desert, and two years later — “the same people, different cars” — to Afghanistan. “We were gone for three months. We went all the way to where the road just came to an end in Afghanistan.”

After college he was hired by Prima, a monthly trade magazine that specialized in the journalism business. At first he translated into Italian articles from the American and British press he thought would interest the media world in Italy, but before long he was publishing his own stories, including one about his trip to Tanzania, where he climbed Mount Kilimanjaro.

In 1983, after a dispute with his managing editor, he left Prima and worked as a freelance journalist before being hired by La Repubblica. In 1991 he became its United States correspondent, and his stories were syndicated in 20 regional newspapers throughout Italy.

Mr. Visconti began covering the presidential elections in 1992. “I went to all the conventions, to Iowa, to New Hampshire. And always Florida and Ohio. Those were the states the Italian media were interested in because they were always swing states.”

Barack Obama’s election was particularly emotional. “That night in Chicago I was not far from the stage when he and Michelle and Sasha and Malia appeared. I just remember it gave me the chills. I did a live television feed that lasted five hours, and it was such an emotional night that I never felt tired.”

His feature stories ranged far beyond politics. “I’ll never forget interviewing Dr. Ruth Westheimer. At the time she was a sensation. Just speaking about sex during an interview was extraordinary.”

In 1998, through a friend who worked at The New York Times, he was given the opportunity to interview a senior copy editor who days earlier had announced to the entire newsroom his imminent gender change.

Mr. Visconti recalled that interview in a piece he wrote in 2013. “It was one of the most extraordinary interviews I had ever conducted because I had never met a transsexual in my life and never had I had the opportunity to have a story as personal as the transition from man to woman.”

“After the initial shock . . . I began to reflect on the question of sexual identity and the courage to do it in the same work environment as always. And I tried to put myself in the inner crisis that Don/Donna could have tried to get to do something so extreme, personally and professionally very risky.”

One Thanksgiving he went to Rikers Island to interview a man who had murdered an Italian citizen in Harlem. “I had no idea if he would talk to me. We shook hands, and I held his hand long enough to try to really establish a contact, a physical contact, because in a second, after I told him why I was there, he could have gotten up and left. But we sat for an hour.”

A search of “New York Stories,” Mr. Visconti’s blog for L’Espresso, turns up, for the month of December 2015, articles on a party at the Museum of Modern Art for the filmmaker Bernardo Bertolucci, a New York-style pizza restaurant in Hong Kong, taxi drivers and racial profiling, artists fleeing New York for other cities, and an art installation at the Armory, “Leonardo’s Last Supper: A Vision by Peter Greenaway.”

Mr. Visconti first came to East Hampton in 1990. “It was a summer share, and at first I thought, ‘I’m not a Hamptons person.’ But by the end of the summer I was madly in love with this place.” After several years he purchased the house in East Hampton where he lives today with his husband, Scott Stebbins, a private chef.

Of his current project, he said, “I never thought I would write a memoir. At one point a couple of years ago, a particular story fell into my lap, and I felt it was an important story to tell. The universal story I’m trying to write is the sense of responsibility that most of us at one point or another feel in our lives for someone else. It could be a child or an elderly parent, it could be a sibling, it could be a neighbor, or a co-worker.”