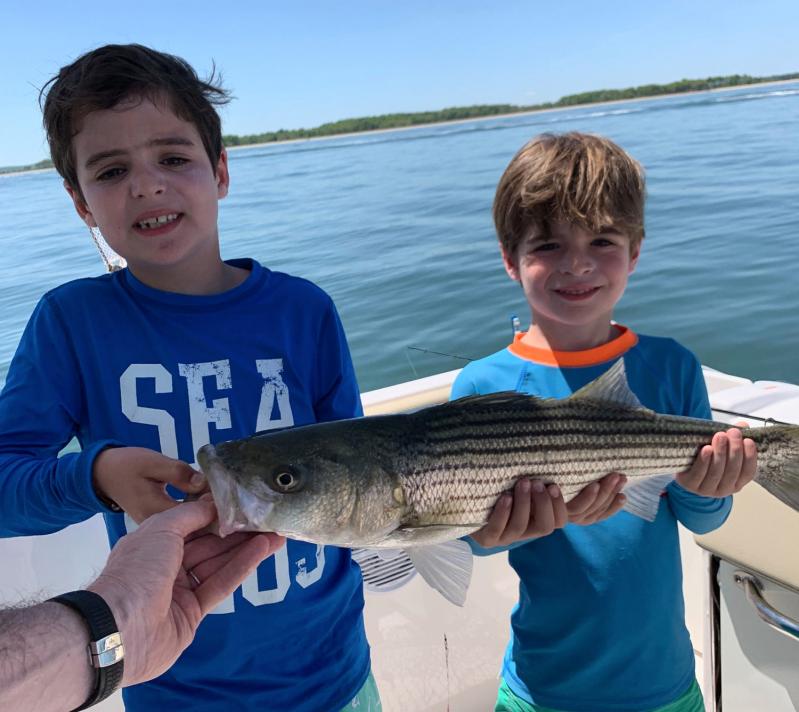 It was a team effort by Brooks and Zander Beshara to land this striped bass last week before it was safely released.
Adam Beshara
By Jon M. Diat

When it comes to the weather, I sometimes think that the Nobel Laureate Bob Dylan summed it up just right: “You don’t need a weatherman to know which way the wind blows.” It is famously featured in his song “Subterranean Homesick Blues.” While Dylan does not hold a degree in meteorology, it’s kind of hard to argue with the meaning of those simple lyrics he penned over 50 years ago.

But beyond sticking your head out the window to see and feel the direction of the wind, those skilled in the field of forecasting the weather, especially those who take to public and social airwaves, probably don’t receive enough credit for what they do. Weather is not an exact science. And yet, those folks will always be easy prey.

Looking back at the Memorial Day weekend, I doubt there were many people who gave credit to the forecasters for the wonderful weather that was predicted and actually happened. Did you raise a beer or a glass of wine to the weatherman at your barbecue? Nope. It rarely crosses our minds to say thank you.

But when the weather is unpredictably lousy, or if the marine forecast of a 10-knot wind out of the north is actually honking at 20 knots from the northeast (and you are 15 miles offshore in a center-console boat), well, you know who’s to blame. The curse words will be flying all around the deck.

While I’m no expert in meteorology, I do enjoy and closely follow the weather, especially as I’m on the water frequently. While I detest some of its campy segments, I’m an avid viewer of the Weather Channel. Our local channel 61 weather update is reliable, as are the frequent updates on WLNG.

Next to my shower resides my old Radio Shack weather radio. Like clockwork, I turn it on when I wake up and before I go to bed. I need to hear what’s going on and what’s coming. It’s a habit I’ve had since going to college in Buffalo over 30 years ago. Now that’s a place where the weatherman gains a bit more attention and notoriety, especially in winter.

My occupation with the weather also affects what car I will buy. The last vehicle I purchased, which was over 10 years ago, needed to include a weather band to go along with the AM/FM/CD player. There was a car that I actually liked better than what I ultimately purchased, but it did not come with such a weather frequency. I can still see the bemused look on the car salesman’s face when I told him that not having a weather radio in my dashboard was a deal breaker. I have to figure that was a first for him.

I used to have a weather station on top of the roof of our house. It monitored just about everything and it was fascinating to watch during major storms and northeasters. But after knocking down the house and building a new one recently, I decided not to install a new station. With so many weather apps and online forecasts readily available, it just didn’t make sense to have such a contraption strapped high above my chimney. I probably have about a dozen weather and wind apps on my iPhone. Enough is enough.

So, let’s all try to show a bit more love and respect for those who call the shots on those forecasts. Mistakes and miscues happen. Try to remember all those days where the forecast was exactly as predicted. Saying thanks never hurt anyone.

“Fishing has been holding on very well,” said Ken Morse from his perch at Tight Lines Tackle in Sag Harbor. “Fishing for stripers has been consistent, while porgies and weakfish continue to bite well. Fluke have been good of late, too.” Morse also confirmed that the first blue-claw crabs of the season have shown up in Mecox Bay.

Upon hearing rumors that the blowfish were thick from the shore at Long Beach, this scribe dragged a chair, bucket, and a package of clams to the sandy beach on Noyac Bay on a sunny Friday morning (the forecast was perfectly accurate too). Few fish dinners can compare to fresh blowfish.

The rumors proved true, as it rarely took more than a few seconds to catch one. Alas, all of the fish were tiny — no more than four inches — and were safely returned so they could mature. Still, it was a very positive sign of things to come.

“Porgies are just about everywhere, but are particularly thick in Fort Pond Bay,” said Harvey Bennett of the Tackle Shop in Amagansett. “Bluefish have been active near Accabonac and bass fishing has been good in the surf. Fluke fishing, too, has been productive in

Bennett was also enthusiastic about the freshwater action. “The fishing for carp has been unreal in Fort Pond and Hook Pond in particular,” he said.

Romance is in the air, or shall I say in the water. As if on cue, horseshoe crabs have begun to take on their annual amorous mood as the June strawberry full moon arrives midmonth. “There are loads of them in Napeague right now,” said the 13th-generation Bonacker. “The females will lay their eggs in the sand on the high tide during the next full moon.”

Bluefish have invaded the rips at Montauk, mixed in with a nice smattering of striped bass. “Fishing diamond jigs has been productive on both species,” said Capt. Hugh Chancey of Chancey Charters in Montauk. “As for fluke, the action has been good and there are some nice-sized fish around.” Chancey’s stout downeaster, named the Ila-Anne, carries up to four anglers for private charters, but also sails as an open boat by reservation on occasion.

“Fluking has been solid,” said Capt. Mark Ryckman, from high atop the bridge of the Montauk Star on Sunday afternoon. “When the conditions are right, we’re seeing a nice number of large fish up to and over 10 pounds.”

There is a new leader atop the Montauk Local Youth Fluke tournament, as Justin Prince landed a 5.3-pound flattie on Sunday. Applications and weigh-ins for those 16 years old and under are accepted at the Montauk Marine Basin. The entry fee is $25. Note that my column last week incorrectly stated it was $5. Perhaps I will blame the weatherman for my error.