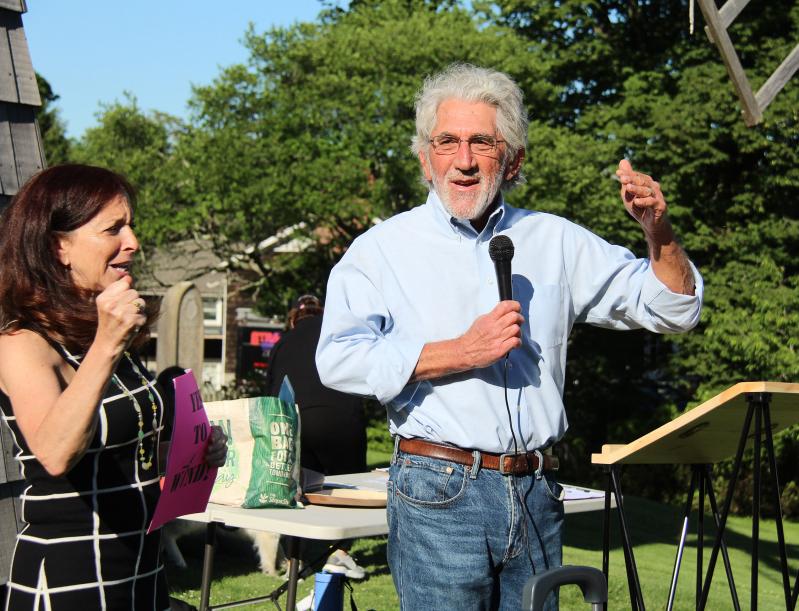 Former East Hampton Town Supervisor Larry Cantwell spoke at a rally in support of offshore wind at the Hook Mill in East Hampton on Tuesday.
Durell Godfrey
By Christopher Walsh

A divide among neighbors and generations was apparent on Tuesday as the New York State Public Service Commission hosted its first information sessions and public hearings on the proposed South Fork Wind Farm, a 15-turbine installation that would be constructed in a federal lease area some 35 miles east of Montauk.

At afternoon and evening sessions, officials of the P.S.C. announced that an application from the wind farm’s developer, Orsted U.S. Offshore Wind, for a Certificate of Environmental Compatibility, has been deemed complete. The application is now in the public review process under the state public service law.

On Tuesday, the P.S.C. took public comment here on the wind farm’s export cable. Its landing site has stirred nearly as much opposition in some quarters as has the wind farm itself among commercial fishermen, who say the underwater cable installation threatens their livelihood.

Orsted officials have identified the ocean beach at the end of Beach Lane in Wainscott as the preferred landing site. A group called Citizens for the Preservation of Wainscott has formed to rally opposition, planting campaign-type signs around town and collecting signatures on a petition opposing the Beach Lane landing.

In response, a wind farm advocacy group calling itself Win With Wind recently formed to rally support for the installation. Its members were among those who held a rally at the Hook Mill in East Hampton on Tuesday afternoon.

In the first hour of the evening public statement hearing, supporters of the wind farm outnumbered opponents, some making urgent appeals to reduce fossil-fuel emissions before a dystopian future of climate chaos, diminished food supply, and refugees in the hundreds of millions becomes a reality. New York’s first wind farm is a crucial step toward that goal, they said.

Frank Dalene, a former chairman of the town’s energy sustainability and resiliency advisory committee and member of the Wainscott Citizens Advisory Committee, did not hold back in calling out those of his neighbors who, he said, claim to support offshore wind but oppose the cable landing in their hamlet. The advisory committee, he said, “fully supported offshore wind up to the day it was announced the cable might land on Beach Lane. I called out the Nimbyism.”

“There rose up charlatans, purveyors of false information, and fear-mongerers,” Mr. Dalene continued. “You have heard and will hear from their opposition in Wainscott opposing the cable landing on Beach Lane. . . . The height of hypocrisy is astounding.”

The South Fork, he said, “will be ground zero for sea level rise,” due to melting ice sheets at the poles. Mr. Dalene asked the P.S.C. to complete its review and approve the wind farm’s cable “with the fierce urgency of now.”

Don Matheson cited dire warnings issued by climate scientists in recent months, and criticized opponents who predict higher electricity rates under Orsted’s power-purchase agreement with LIPA, which neither party will dis close. “The question is not, will Deepwater Wind cost us an extra $1.50, it’s will we continue to cling to the status quo . . . or join those doing whatever they can, at whatever cost,” to halt or reverse climate change, he said.

“Too expensive for what?” Mr. Matheson demanded. “To keep Montauk from becoming an island?” He cited predictions of wars over diminishing resources, with refugees searching for food. “We’re standing at the rail of a sinking ship in our tuxedos, looking down at the lifeboat, asking ‘Does this lifeboat have a bathroom? Why can’t I take my suitcase?’ ” Mr. Matheson said. “It’s time to stop dithering and build this thing.”

Perry Gershon, who lost a race to oust Representative Lee Zeldin in New York’s First Congressional District last year and plans to challenge him again in 2020, also raised the global and local consequences of climate chaos. “We can’t ignore the national and international implications, and the rest of the globe can’t ignore the implications on us locally,” he said. “Climate change is driving people out of their homes, forcing them across borders . . . we can set an example for the rest of the country and state to get a project done and to increase our ability to deliver renewable energy for all of us. We can start it, others will follow our example.”

Mr. Gershon said his campaign had shown him “how the environment and labor are coming together to deliver for a common cause.” Union jobs that better the environment will “make all our lives better in the long term,” he said.

Roger Clayman, executive director of the Long Island Federation of Labor, echoed that sentiment. “We have come to understand that building wind farms will mean jobs,” he said. “They will mean a way for a green future for Long Island and, hopefully, the country and planet.” Thousands of jobs can be created on Long Island, he said, though he acknowledged that some union members “will make sacrifices in the changeover from fossil fuels to renewable energy.” He urged the P.S.C. to look favorably on the project.

A town trustee, Rick Drew, was the first to speak at the evening session. While he is “deeply concerned about the impacts of climate change on the marine environment,” he said, the trustees have represented the rights of the community pertaining to fishing and public access for centuries, and wanted five points of interest entered into the record: An independent engineering review of Orsted’s construction and operations plan for the cable’s landing site, regardless of where it is; the establishment of a fund to ensure that any “issues” with the installation of the cable, such as erosion, are addressed in a timely and professional manner; the continual monitoring of the electromagnetic frequency emanating from the wind farm’s cables, which fishermen say could repel fish and alter migration patterns; an E.M.F.-specific study on striped bass ecology, as well as other finfish and baitfish, given the importance of the fish to the local economy, and an agreement encompassing a compensation plan in the event that fishermen are adversely affected by the project, or other unintended consequences arise. “True compensation to the community,” he summarized.

Commercial fishermen also fear hundreds if not thousands of turbines along much of the Northeast and Middle Atlantic coasts, which offshore wind’s proponents have dubbed the Saudi Arabia of wind. Governor Cuomo, who wants to develop 800 megawatts of offshore wind projects, is expected to announce the names of bidders in the coming days. Those 800 megawatts would represent an initial step toward a goal of 2,400 megawatts.

Some of Tuesday’s most dramatic testimony came from grandmothers. Francesca Rheannon, who is on the town’s energy sustainability and resiliency committee, spoke of her granddaughter, who is 15. “Not a day goes by that I don’t think of what kind of life she faces if we don’t decarbonize by the middle of the next decade,” she said. “We can’t waste one more year in constructing a cable. We need to start working on this wind farm now.”

She too spoke of climate-induced fisheries collapse and crop failures. “If you’re worried in Wainscott about property values, think about it when saltwater intrudes on our sole-source aquifer and you can’t get drinking water,” she said. “What’s going to happen to property values when you have lost your beachfront? This is an emergency we face. We need to get started now.”

The energy sustainability and resiliency committee’s chairwoman, Linda James, also referenced her grandchildren, citing the town board’s 2014 commitment to achieve all the town’s energy needs from renewable sources in the near future, “and we’re on our way,” she said. “There isn’t anyone in this room tonight that does not appreciate what we have at risk right now.” The question, rather, is “how we’re going to resolve that and how we’re going to make our community participatory in responding to this crisis that faces my grandchildren.”

East Hampton residents have a rare opportunity in the South Fork Wind Farm, she said. “That is a leadership capacity that I would think all of you would want to participate in . . . I hope we will remember this night.”