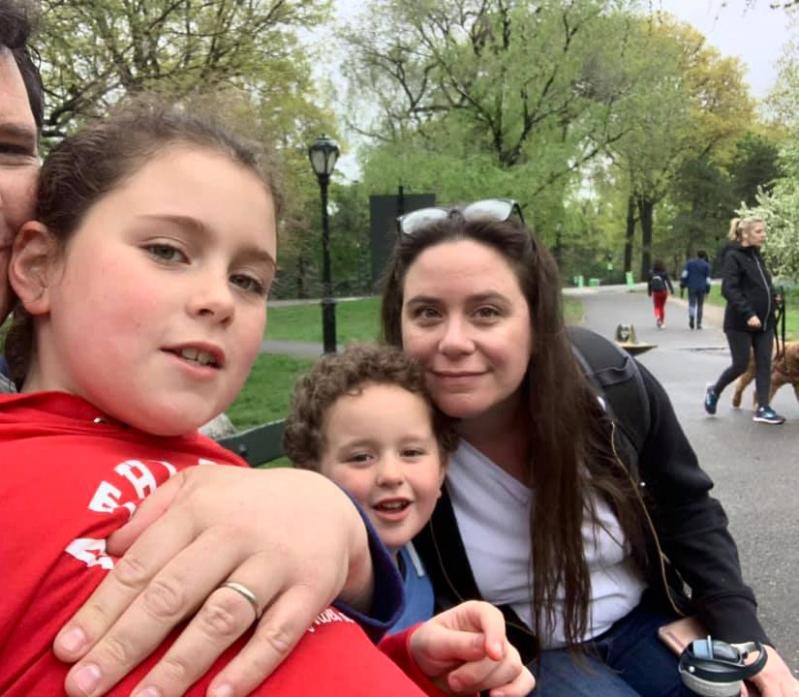 Ella and Charlie Menu with their mother, Kathryn Menu. All three of them attended either the Eleanor Whitmore Early Childhood Center or East Hampton Day Care, with Charlie set to graduate from prekindergarten later this month.
By Christine Sampson

The once little graduates of East Hampton’s Eleanor Whitmore Early Childhood Center or its predecessor, the East Hampton Day Care Center, have grown up to accomplish big things.

There’s John Sebastian Pineda, an astrophysicist who works at the University of Colorado at Boulder, who says he began learning English at the center when his family moved here from Colombia in the early 1990s.

There’s David Lys, an East Hampton Town councilman who has owned and operated a number of local businesses and helped shepherd the restoration of the Amagansett Life-Saving and Coast Guard Station.

The list goes on and on. And on June 15, the Eleanor Whitmore Early Childhood Center will celebrate the many achievements of its alumni at its annual barn dance benefit at the Kilmore Farm in Wainscott.

“Making this connection for us with our center and alumni really does speak to our overall goal of doing things now that will impact that stage of life that we’re really celebrating at the barn dance,” Arlene Pizzo Notel, the center’s program director, said this week.

Research shows that early childhood education, prekindergarten programs in particular, sets children up for success even at age 3 or 4. A National Institute for Early Education Research study of a New Mexico prekindergarten program that began in 2007 tied pre-K education to “greater improvement in early language, literacy, and math development” in students later on. A well-known study by the Abecedarian Project, sponsored by the University of North Carolina at Chapel Hill, found that “children in quality preschool programs are less likely to repeat grades, need special education, or get into future trouble with the law.”

According to Ms. Pizzo Notel, the Eleanor Whitmore Center this year has about 100 children between 18 months and 5 years old from the Springs, Wainscott, and Sagaponack School Districts. East Hampton recently began educating its prekindergarten students in-house at the John M. Marshall Elementary School after more than two decades contracting with the center for that program.

The Eleanor Whitmore Center began as East Hampton Day Care in 1969 on Cedar Street, first established as the East Hampton Organization for Community Action Inc. “to provide child care services for working families in our community,” a history of the center says. In 1995, the Marden family donated a house that was moved to Gingerbread Lane to become the day care’s new home. It was renamed the East Hampton Day Care Learning Center in 1996, the same year it signed its first contract with the East Hampton School District to provide prekindergarten services. In 2013, it was given its current name in honor of Eleanor Whitmore, a founding member and longtime supporter.

Ms. Menu looked back at her time at the center and recalled what felt like “second mothers” caring for the children. She said it had “a family atmosphere” and even remembers making a video version of the musical “Annie,” which was very popular back then, with her fellow students.

“The East Hampton Day Care was one of the few opportunities for affordable day care,” Ms. Menu said. “It wasn’t just a place where you went and watched TV. They were engaged in early education before early education became a priority for parents and school districts and before prekindergarten became a standard.”

Her son will graduate from the center later this month. He loves it there, she said.

“It’s been a really important year for him,” Ms. Menu said. “To say that he’s a different child at the end of this year than he was at the beginning is an understatement. The center has been great.”

Ms. Keogh, a real estate agent with Douglas Elliman’s Atlantic Team in East Hampton, recalled music classes in the great room, playing in the playground, Cultural Day celebrations, and even Flag Day one year. She said she is still friends with many of her fellow day care center alumni

“I think it set me up socially — learning how to share, play with friends, and making friends,” said Ms. Keogh, whose nieces and nephews attend the center now. “It started off a lot of friendships, without even realizing it, at such a young age.”

Dr. Pineda said the English language skills he picked up at the center in the 1990s meant that by second grade, he didn’t even need English-as-a-second-language services anymore.

“That really made a big difference,” he said. “I think it’s a really important part of the community and I think it provides an important service to the working parents. It gives you an edge in early childhood and provides opportunity for kids at a young age to develop skills.”

In a letter to the center on the occasion of its benefit, East Hampton Town Supervisor Peter Van Scoyoc praised its history and service.

“Research has confirmed that quality education and learning experiences are crucial in the early childhood years, and the [center] has provided a solid start to many of our East Hampton youth,”

he wrote. “This is borne out with a look

at the accomplishments of Eleanor