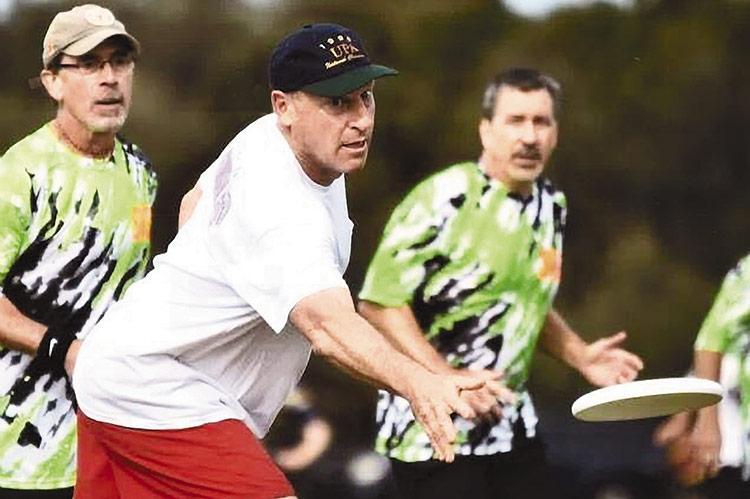 A world champion for the fifth time, Sas Peters of Amagansett can connect with an Ultimate disc receiver in the end zone from 80 yards out.
UltiPhotos/Kevin Leclaire
By Jack Graves

Last year about this time Sas Peters came into the Star office with a medal around his neck that appeared to be gold in the office light, but was in fact silver. This year it was indisputably gold.

Peters has for years been a force behind broadening the reach of Ultimate disc, a number of whose age-group divisions had their starts here on the John M. Marshall Elementary School fields.

He played for Surly, a Minnesota team, a few of whose players were on Peters’s New York City team, Cigar, which won a world masters championship in 1999.

“That team,” he said, referring to Cigar, “was a lot like Surly because we had the greatest people and the greatest athletes anywhere. We dominated the masters division in 1998 and ’99.”

He and Russ Adams, Surly’s captain, first met at the world championships in Vancouver in 1997, Peters said. His and Adams’s team combined that year, but did not win. Two years later, with Peters as the captain, and with Adams and the late Marty Backo as teammates, Cigar did. “Russ and I have played in many giant tournaments over the years. He’s the defensive star. He’s lightning fast, anticipates perfectly, cuts off the angle of his receiver, and makes diving steals. It’s one thing to block a pass, but another to dive and catch the disc. It’s like an interception in football, a much harder play.”

(The fast seven-on-a-side disc game is particularly known for the fact that players acknowledge their own fouls. Turnovers result when a thrown disc hits the ground.)

The Sarasota Sunset tournament was contested “in conjunction with the PanAm Games — there were PanAm athletes from all over watching us. The quality of play was so high, the teams were so good, and the players were just amazing. The throws were outrageous. Guys on my team can uncork 50 to 60-yard touchdowns. I can throw 80. The games were blazing fast, the level of athleticism was so high.”

It was Peters’s fifth world championship, but, because he’s a legend (over-60) age-wise, the sweetest yet, he said. “Just to be able to play is wonderful,” he added with a smile.

The Ultimate season is over now, though there remains the frolicsome Turkey Bowl in Bridgeport, Conn., over Thanksgiving weekend.

In last year’s interview, Peters said he was hoping to get U.S.A. Ultimate, the sport’s governing body, to include a demonstration legends division in the 2019 national championships. That hasn’t happened yet, he said this week.

“All of these senior divisions, you know, began right here in East Hampton,” Peters said. “We’re in our 20th year. Our tournament is always the weekend before Memorial Day. We held the first grand masters tournament in the country in East Hampton, and the first great grand masters tournament too, and in the last four years we’ve played the only legends division games in the country here. And soon there will be a legends division on the national stage. So, we’re keeping Ultimate alive.”