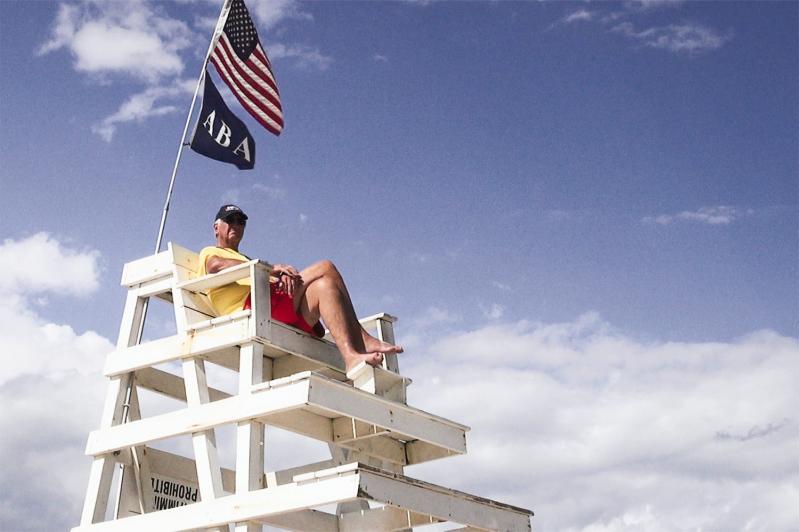 John Ryan Sr., a lifeguard for life, seen above atop the Amagansett Beach Association stand that he built, has been described by Ross Kauffman, the director of “Waterproof,” as “a force of nature.”
Courtesy of Mae Mougin
By Jack Graves

It took Mae Mougin 10 years to give birth, she said during a conversation at The Star the other day, to “Waterproof,” a 40-minute lifeguard-centered documentary film that celebrates the core of East Hampton, a community that she and the film’s Academy Award-winning director, Ross Kauffman, find to be exemplary in the way it pulls together.

It is to be given its world premiere showing as part of the Hamptons International Film Festival at the East Hampton Cinema on Sunday at 3:45 p.m., and again on Monday at 4.

She first got the idea, Mougin, a Southampton ceramicist, said, more than 10 years ago, when her son, Jean, who’s 31 now (and is one of the film’s producers), was in the Ryans’ junior lifeguard program here.

Mougin and Laurie Wiltshire, with the support initially of LTV and Seth Redlus, began shooting in earnest around Memorial Day of 2011, as the Ryans, John Sr. and Jr., were conducting a massive rapid response drill “with all the town agencies . . . the East Hampton Volunteer Ocean Rescue squad, the police departments, E.M.T.s, the fire department dive teams” in the wake of a drowning that had just occurred along an unprotected stretch of beach on Napeague.

“The whole film is about saving lives and about what it takes in the way of community bonding to achieve that,” Mougin said. “The question was, after Leslie Sgaglione’s drowning on the Napeague stretch, what can we do so it doesn’t happen again. . . . It’s a call-to-action film that’s woven in with the stories of some wonderful characters . . . the Ryans and all their children and grandchildren — taking the ocean certification test is a rite of passage for them — T.J. Calabrese, Bob Pucci, Vanessa Edwardes, Tom Field, Ed Reid, Thomas Brierley, Kathee Burke-Gonzalez, Haley Ryan, Michael Sarlo . . . a lot of people, the list is endless. It’s not just about lifeguards, but about a community that, as Kathee Gonzalez said, comes together to help each other.”

Scenes were also shot, she said, of training at the Maidstone Club, at ocean lifeguard certification tests, “one in rain and thunder that Jaci Judelson filmed,” and at the homes of John Ryan Sr. and Jr. Interviews were conducted at the Amagansett Life-Saving Station and at East Hampton Village’s Emergency Services Building. It ends with three tips: “Learn to swim, learn rip current safety, and swim near a lifeguard.”

“I’m in awe of what the Ryans and lifeguards do,” said Mougin. “People have no idea what it takes to be a lifeguard. . . . I’m more fearful of the ocean than I was when I started. You’re always looking at the rip. Is everyone safe? Is anyone in trouble? That’s the way the lifeguards think.”

“The story is the people — I was inspired by them,” said Kauffman, when asked what the story of “Waterproof” was. “I was wondering what it would be myself until [on St. Patrick’s Day of 2016] I met the Ryans — Big John’s a force of nature — and everyone else. It’s a great story about extraordinary people that I hope will help further the cause of good in the world.”

As can be imagined, given the long gestation period, “Waterproof” has floundered a bit over the years when it comes to the financing needed to keep it afloat.

“We had a ‘sizzle,’ a short fund-raising showing, at Guild Hall,” Mougin said, “in June of 2012, where we raised money from the community and continued shooting. But then we came to a standstill for a while until the late Dominic Kulik, who was a member of the Hampton Lifeguard Association, and his sister, Regina Scully, a three-time Emmy Award-winner, through her Artemis Rising Foundation, stepped up and funded what was needed to complete it. Regina brought in Ross, who’s been on the project for three years. Without her, without her brother, without Ross, or without the Ryans, we wouldn’t have a film.”

“If I hadn’t done this,” she reflected, “my life would have been different — I would never have known the Ryans, I would never have become a lieutenant in the ocean rescue squad’s auxiliary. . . . It’s been so rewarding to become part of this community. For this film to be made everyone had to be involved — everybody had a role in making it happen. I had the idea, but I couldn’t have done it alone.”

Asked how she felt on the brink of her baby’s introduction to the world, Mougin said, “I’m kind of numb, like I’m in freezing cold ocean water, but I’m thrilled at the same time. I feel such gratitude to this community for allowing me to see this project come to fruition.”