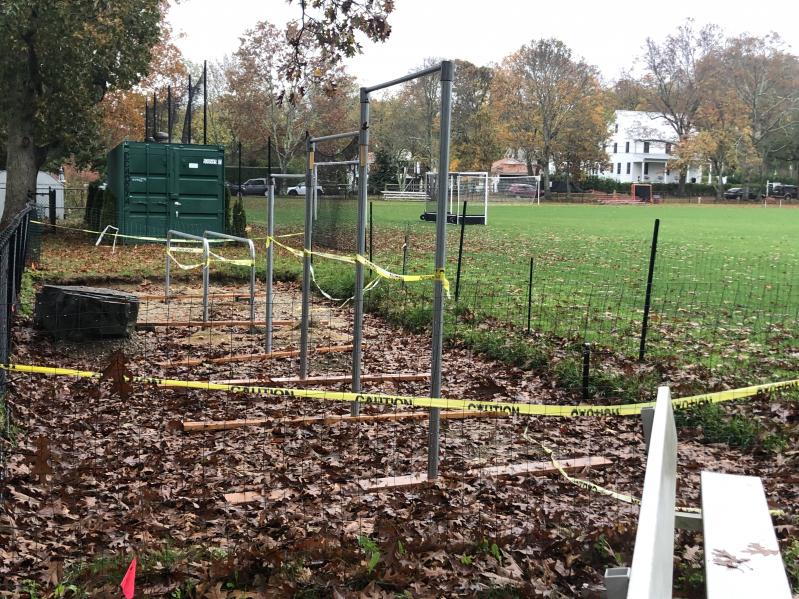 The Sag Harbor School Board made progress Monday on issues holding back the installation of outdoor workout equipment at Pierson Middle and High School. The equipment, including pull-up bars and parallel bars, was donated by a local nonprofit in honor of Mike Semkus, a Sag Harbor native, coach, and teacher who died of an overdose in 2016, but its installation has been mired in controversy for several weeks.

Dave Harvey, an architect who has worked on several notable projects including the new condominiums at 2 West Water Street in Sag Harbor, worked on the project pro bono and on Monday presented the school board with information from the manufacturer of the equipment showing that the current configuration meets specifications.

Several weeks ago, as Mr. Harvey and his crew of licensed contractors — also volunteering their time and efforts — were nearing completion of the project, they were slapped with a stop-work order by the Sag Harbor School District administration and attorney over insurance questions.

Mr. Harvey’s son, Drew Harvey, is a founder of the Dawgpatch Bandits, a group that promotes fitness and healthy choices as a means of combating drug addiction, and which donated the exercise equipment to the school.

On Monday, a lead architect with IBI Group, the district’s official architectural firm, told the school board he believed the workout equipment did not meet safety specifications. “Our biggest concern is basically two violations or impedances on what’s called the use zone,” Ed Bernhauer said via videoconference. “It’s really the safety zone where you do not want any structures.”

But Dave Harvey disagreed, saying the pieces of equipment were situated adequately, and that the cement footings were appropriate except for the one that had been interrupted by the stop-work order. He said the memorial rock was not in its final location.

At the heart of the issue is insurance coverage. A letter from the insurance company, obtained by a Freedom of Information Law request by Sandi Kruel, a former school board member who is concerned over how the project was handled, says the work should preferably be “performed by a licensed contractor but we do understand that many times schools may desire volunteer labor to engender and encourage a strong sense of pride within the community.”

Mr. Harvey said he and his crew are all licensed and insured.

Jordana Sobey, the school board president, and Katy Graves, the superintendent, agreed to check back with the insurance company before possibly seeking bids from contractors to complete the work.

“The board did approve the project but did not approve beginning construction of the project,” Ms. Graves said. “We had to go over a few more hoops with our attorney.”

She suggested that if it comes down to bidding, Mr. Harvey might bid $1 to secure the contract for the project and have his crew finish it essentially as volunteers.

Ms. Sobey suggested it is out of the board’s hands at this point. “Everyone wants to see this completed as soon as possible but we’re a school district and we have liability issues,” said Alex Kriegsman, the school board’s vice president. “It’s not for anyone here at the table to decide. What we need to do is follow up with our insurance agency as much as possible.”

Also Monday, Ms. Graves addressed two contract amendments she signed in May with IBI Group that had not gone before the school board for approval, meaning the school board members were initially unaware of them. The amendments awarded additional money to IBI Group for extra work on the Sag Harbor Learning Center that arose after the original agreement was signed in 2017. Ms. Sobey confirmed Tuesday that she had not known about the two contracts at the time they were signed.

Whether the two contract updates actually needed board approval is still in question, but Ms. Graves said in hindsight she wished she had explicitly shared that information with the school board. The two contracts came to light publicly after Mary Anne Miller, a former board member, received them via a Freedom of Information Law request and shared them with The Star.

“Projects expand and contract. Sometimes they get smaller or bigger,” Ms. Graves said. “When news comes to the board I never want to surprise the board or a community. I apologize that that information came as a surprise to the board. . . . I don’t think I could have not signed off on this. My priority was to keep the project moving along as quickly as possible.”