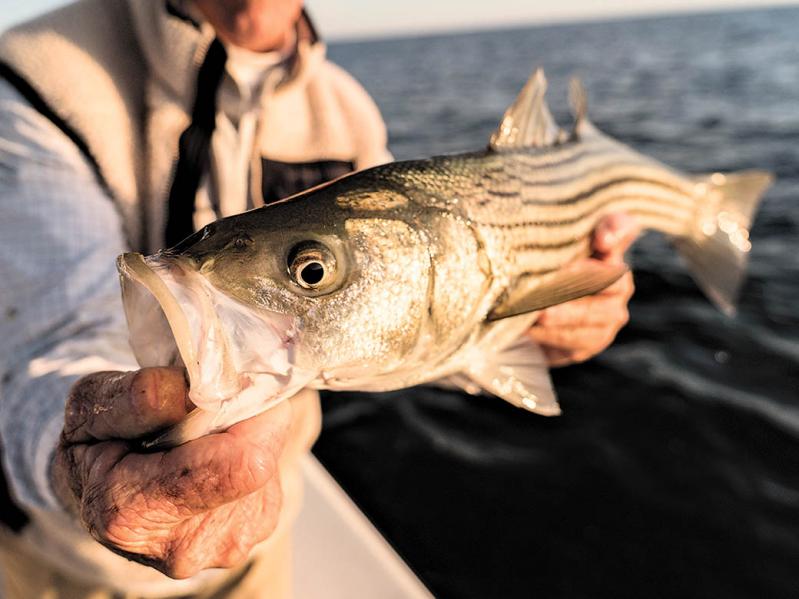 Bureaucracy and fishing seem to go hand in hand. Long gone are the days when a dragger could simply pull out of its slip any time and make a day’s pay, and it’s no different for recreational anglers and those who own guide services, or party and charter boats for hire. Name a species of fish and there’s a high probability that there is some kind of restriction or regulation on what size fish can be kept, how many you can keep, and what season you can catch them. It can get rather confusing at times.

This fall, the topic is a hot one for many, as East End anglers will likely see cuts that will reduce the harvest of striped bass by up to 18 percent in 2020. Nor are stripers alone in the discussion among fishery regulators — drastic cuts may be applied to black sea bass and porgies as well.

Looking first at stripers, the Atlantic States Marine Fisheries Commission, a 15-state agency that manages the fishing of multiple species along the East Coast, has drafted possible regulations in response to a 2018 stock assessment that striped bass are overfished. As such, officials are now reviewing several options that would include a new size limit (one bass over 35 inches or a slot limit of one fish between 28 and 38 inches); the use of circle hooks when fishing with bait, and a shorter season for catching the popular fish.

Michael Armstrong of the Massachusetts Division of Marine Fisheries, who chairs the fisheries commission’s Striped Bass Management Board, said in a statement that the proposed changes are a “critical first step to stem overfishing as quickly as possible and begin efforts to rebuild the biomass.”

Primarily as a result of poor spawning and heavy fishing pressure, the population of striped bass hit rock bottom in the early 1980s. The female “spawning stock biomass” (S.S.B.) for stripers was less than 20,000 metric tons, according to the fisheries commission. The current target for striper S.S.B. is 90,000 metric tons, while the group’s 2018 stock assessment found it at about 68,000 metric tons.

In 1986, New York’s striper fishery was closed entirely, due to concerns about PCB levels in the fish, not because of harvest controls. However, the closure was seen as a crucial step in the recovery process of the prized fish.

The closure was lifted in 1987, but the need for stricter controls on stripers was by then a widely accepted reality.

However, in 2004, New York and several other states started allowing anglers to keep two fish, the second one being a “trophy” fish over 40 inches, and striped bass stocks began to decline. In New York State, the trophy-fish rule was dropped several years ago, with the exception of bass caught north of the George Washington Bridge in the Hudson River.

“I’d like to see a total moratorium on striped bass, but that’s not going to happen,” said Capt. Paul Dixon, a light-tackle and fly-fishing specialist, and owner of To the Point Charters in East Hampton. “Right now, I’d go back to one fish at 35 inches as a means to help replenish our stocks.”

“We need to protect the 2011 and 2015 class of fish, which were huge spawning events,” he added. “These are the small bass we are now catching that will spawn when they mature.”

The Montauk Boatmen and Captains Association has decided as a group to support a proposal for the retention of one bass over 35 inches, per person. “We hope to get the size reduced through conservation equivalency with a shortened season, and give up the fish for the crew and anything else we can sacrifice,” said Capt. Richard Etzel, president of the boatmen’s association and the owner of the charter boat Breakaway.

“Everyone has different ideas and proposals,” said Capt. Michael Potts of the Blue Fin IV, a Montauk-based charter boat. “I think a slot size like they have for stripers in the Hudson River is a good idea to implement, but we’ll see what finally comes down soon.”

Public input on striped bass options ended on Monday, and a final decision on new regulations will likely be made before the end of the year.

Even more perplexing to those who make a living on the water are possible cuts in 2020 to both black sea bass and porgies. New York anglers are looking at a mammoth 41-percent cutback on sea bass, a fishery that by just about any account is fully restored and healthy. Porgy anglers may also take it on the chin with a possible 50-percent reduction in the number of fish they can retain.

“This would have a catastrophic effect on my, and other fishermen’s, lives,” said Captain Potts, whose family has fished since 1944. He claims that the drastic cutback on a healthy sea bass fishery is uncalled for. “We already cut back last year, and we can’t keep any fish until late June, and then only three fish until September. It’s just crazy.”

Another longtime fisherman, Capt. Rob Aaronson of the Montauk charter boat Oh Brother! agreed. “It is a crime to hear of a possible cut in sea bass and porgies for the 2020 season, when they are thriving and eating everything they can get their mouths around,” he said. “Sea bass, according to the best available science, are 240 percent rebuilt, and we are facing a cut in quota? It’s mind-blowing.”

“I’m all for supporting regulations that are fair and equitable,” said Ken Morse, the owner of Tight Lines Tackle in Sag Harbor. “But who is managing our fisheries? It’s just ludicrous that regulators are proposing such cuts for porgies and sea bass, where they are at the highest levels in population in decades. There is no shortage of them. It just does not make sense. Everyone will be drastically hurt by these if they come to pass.”

Mr. Morse, who has operated his shop on Bay Street for over 25 years, says it gets tougher and tougher each year to remain in business. “It’s not an easy business to be in, and if these new proposals get enacted, I’m going to lose even more.”

Harvey Bennett, a 13th-generation Bonacker who has owned the aptly named Tackle Shop in Amagansett for nearly 40 years, also claims the repercussions will be significant. “It keeps getting harder and harder to stay in business,” he said. “As for porgies and sea bass, they are as thick as I’ve ever seen them in my whole life. Sea bass in particular are all over the place. Moving forward with such cutbacks is totally ridiculous. Everybody who has an operation associated with fishing would be affected.”

“The future of our business is at stake,” summarized Captain Aaronson. “It’s going to be tough to preach sportfishing for sea bass and porgies to my clients.”

Possible restrictions on the two popular species are not likely to be decided upon until early next year.