At 14.1 cents per kilowatt-hour, customers to pay less than on Block Island 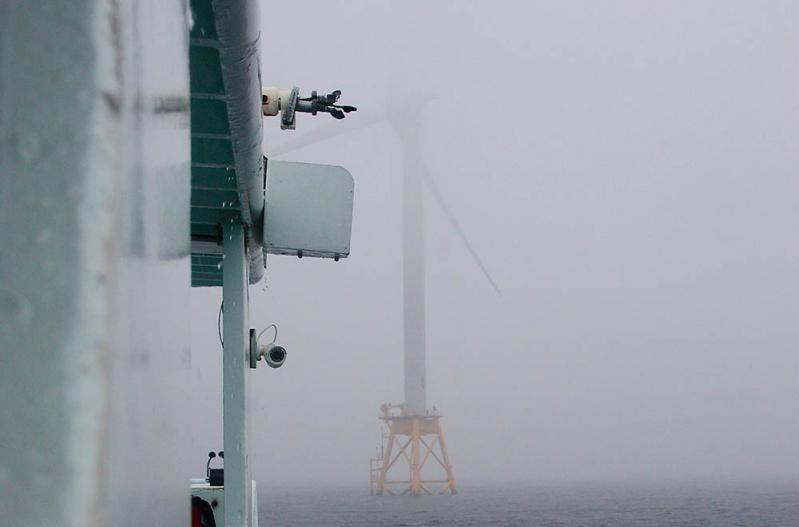 One of the wind turbines off Block Island; LIPA's release this week of details on rates Long Island customers would pay for power from the separate South Fork Wind Farm show they would be less than rates Block Island customers pay for their wind power.
Durell Godfrey
By Christopher Walsh

While that figure is significantly higher than the per-kilowatt-hour cost of the Sunrise Wind and Empire Wind projects, both of which were recently awarded New York State contracts to develop offshore wind farms that will jointly generate 1,700 megawatts of electricity, Thomas Falcone, the LIPA C.E.O., emphasized in a conference call on Monday that the cost of those far larger projects is spread over a statewide ratepayer base. Costs, he added, will continue to fall as technology improves.

To date, the five-turbine Block Island Wind Farm is the sole offshore wind farm in the United States. The electricity it generates costs 37.6 cents per kilowatt-hour, according to a fact sheet issued by LIPA. The South Fork Wind Farm, initially proposed as a 90-megawatt installation, was expanded to 130 megawatts last year. A 16.3 cents per-kilowatt-hour cost was set in 2017 based on 90 megawatts; the 40-megawatt upgrade will come at a cost of 8.6 cents per kilowatt hour (both figures will escalate at an average of 2 percent per year for 20 years).

The latter cost per kilowatt-hour, contracted last year, represented the least expensive renewable energy on Long Island at the time. The 14.1 cents per kilowatt-hour figure represents the average cost of electricity over 20 years for the combined 130 megawatts. It is a levelized cost of electricity expressed in 2018 dollars, using a 6.5-percent discount rate (the potential of renewable energy projects are commonly assessed using discount rates to standardize conditions, allowing a fair evaluation of a project’s value over time periods).

By comparison, electricity from the Sunrise Wind and Empire Wind installations are to cost 8 and 8.7 cents per kilowatt-hour, respectively. (Sunrise Wind, like the South Fork Wind Farm, is a joint venture of Orsted and Eversource Energy.)

According to the U.S. Energy Information Administration, the average price of electriciy to New York State customers was 18.4 cents per kilowatt-hour in August, versus a national average of 13.3 cents.

LIPA’s South Fork Project Portfolio, which includes the South Fork Wind Farm, two utility-scale battery storage installations, and new energy efficiency programs, will cost an average residential customer on Long Island between $1.39 and $1.57 per month, according to the utility.

“We’re thrilled that there’s a new available clean source of energy downstate that is so competitively priced,” Mr. Falcone said. “I’m confident prices will continue to decline, as we’ve seen across all renewables.” Prices have declined rapidly in Europe, he said, owing to increased investment and improving technology. “Offshore wind is fairly de veloped in Europe — 8 gigawatts, and more in the pipeline, compared to 30 megawatts in the U.S.” Costs will logically decline as a domestic offshore wind industry matures, he said.

Until Monday, the cost of electricity generated by the South Fork Wind Farm had not been disclosed, prompting some South Fork residents to criticize LIPA and the developer, Orsted U.S. Offshore Wind, for insisting on secrecy. Simon Kinsella, a Wainscott resident and strident critic of the wind farm, sued the state, seeking to compel LIPA to disclose the cost to ratepayers represented by the wind farm.

Mr. Falcone said that the cost was not disclosed pending the New York State Energy Research and Development Authority’s announcement last week that it had finalized contracts with the developers of the Sunrise Wind and Empire Wind projects. “We are regularly in the market for clean energy,” he said. “We are regularly doing [requests for proposals]. Just because we don’t select it in one round doesn’t mean we won’t see it in the next R.F.P. You do not necessarily want bidders who weren’t selected to know what you did select.” He likened the process to purchasing a car. “You wouldn’t want three dealers to compare notes on what price they quoted you.”

Or, as LIPA’s fact sheet states, “there are times when it is not in our customers’ interest to disclose every aspect of a power purchase agreement for a simple reason — if developers see the exact terms and conditions for each agreement, it undermines our ability to negotiate the best terms for our customers in other procurements.”

Now that NYSERDA has announced details of its contracts, “the information is stale and no longer has the same value,” Mr. Falcone said, “so it’s not a big deal to release it.”

He said that LIPA had turned down proposals for wind farms in the past, “but here was a project that could put energy in the grid at a competitive price, which helped deliver the benefit of delaying further transmission investment.” Depending on federal, state, and local permitting authorities, the South Fork Wind Farm could be operational by the end of 2022.

In July Gov. Andrew M. Cuomo signed the Climate Leadership and Community Protection Act, which sets the state’s goals of 70 percent of electricity derived from renewable sources by 2030 and 100-percent carbon-free electricity by 2040. The state has also committed to a minimum of 9,000 megawatts of offshore wind by 2035; LIPA’s share of that goal is more than 1,000 megawatts. “The technology has gotten to the point you see in other markets,” Mr. Falcone said, pointing to cellphones and flat-screen televisions. “Suddenly, you see a lot of adoption very fast.”

“Obviously, this is way too big to fail,” Thomas Brostrom, Orsted’s U.S.-based chief executive officer, recently told Axios. “We’re looking at $70 billion to be invested over the next 10 years.”

“The need to buy clean energy increases every year,” Mr. Falcone said. “Future prices will be lower,” he said of renewable energy, quoting a 50-percent reduction in the cost of solar-generated electricity over 20 years, “in some places in the state two-thirds less.”

Meaghan Wims, an Orsted U.S. Offshore Wind spokeswoman, said on Tuesday that the South Fork Wind Farm “will help meet the area’s energy challenge, delivering renewable energy when and where it’s needed most and providing the most affordable way to meet LIPA’s reliability and clean energy goals for the South Fork. While the South Fork Wind Farm is modest in scale compared to recently announced offshore wind farms” — it will employ just 15 turbines — “it was designed to specifically address the South Fork’s energy needs and was selected over 18 other competitors as the most affordable option.”

Gordian Raacke, executive director of the advocacy group Renewable Energy Long Island, cheered LIPA’s disclosure of the cost of electricity generated by the South Fork Wind Farm. “The bottom line to me is that I’m glad they finally released more financial details,” he said of LIPA. “What it tells us is that the South Fork Wind Farm enables us to not only get renewable and reliable energy now, but it’s affordable.”

The 55-percent reduction in cost per kilowatt-hour from the Block Island Wind Farm to the initial 90 megawatts of the South Fork Wind Farm is also a good sign, Mr. Raacke said. “We’re starting to get into the range of the very large projects happening in New York and other states in the Northeast. They can achieve lower prices because they’re much bigger and came at a later point in time.”