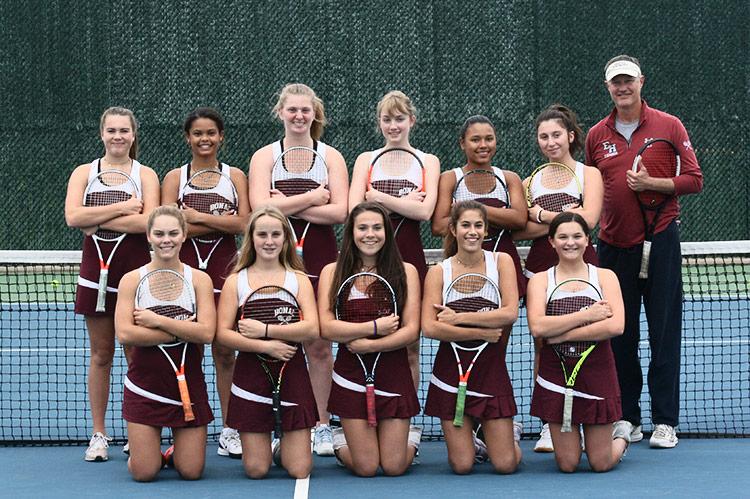 Kevin McConville, at right, expects his East Hampton High School girls tennis team, which is to lose only one senior starter, to be even stronger next fall.
Jack Graves
By Jack Graves

In other action, the high school’s girls tennis team, after defeating Longwood 4-3 in the first round of the county team tennis tournament, lost by a like score to Bayport-Blue Point, which went on to lose 5-2 to Half Hollow Hills East in the quarterfinal round. Westhampton Beach, the top seed and undefeated league champion, was to have played Islip in the final Monday.

Meanwhile, the swimming team was to have competed in the league championship meet at Hauppauge Tuesday.

Craig Brierley, the team’s coach, said in an email that at Hauppauge Jane Brierley swam county-qualifying times in the 200-yard individual medley, which Kiara Bailey-Williams won, and in winning the 100 breaststroke; that Bailey-Williams was second in the breaststroke, and that Sophia Swanson “was just off her best time in winning the 100 butterfly, missing the state qualifying time by .47.”

Sophie Tucci, new to the sport this year, was named swimmer of the meet by the captains. The ninth grader swam the C medley and 400 freestyle relay teams’ opening legs.

The team finished in second place in league competition, behind undefeated Sayville-Bayport.

As aforesaid, the girls tennis team was eliminated from the county team tournament at Bayport-Blue Point on Oct. 22.

Kevin McConville, East Hampton’s coach, was hoping to take two singles matches that day, but the home team won three of them. Romy Lauer, playing at four, went up 5-3 in the first set, but wound up losing it 7-5. She lost the second set 6-1.

Against Longwood here on Oct. 21, East Hampton won all three doubles matches and one and a half singles matches, though Eve Marsden’s, at three, which was in progress after the Bonackers had clinched, was stopped after she and her opponent had split sets.

Looking back on the season, McConville said Monday at the Hampton Racquet Club, where he is the head pro, that he was greatly pleased with the doubles teams. Only one of those six players, Mendelman, is to graduate.

Headed by Juliana Barahona, a junior who’s begun to play U.S.T.A. junior tournaments (one of which is to be contested at the Ross School this weekend), all the singles players are to return.

Lauer, McConville said, was his “most improved” designee. “She missed last season because she was at a prep school in the city, but she’s worked very hard this fall. She has a great attitude. She and Juliana pushed each other. . . . One and two doubles were rock solid all year.”

Next year he expected even better things, the coach said, especially considering “we’ll have that Pierson middle schooler — I don’t know her name — who the girls say would have played two this year if she’d been on the varsity.”