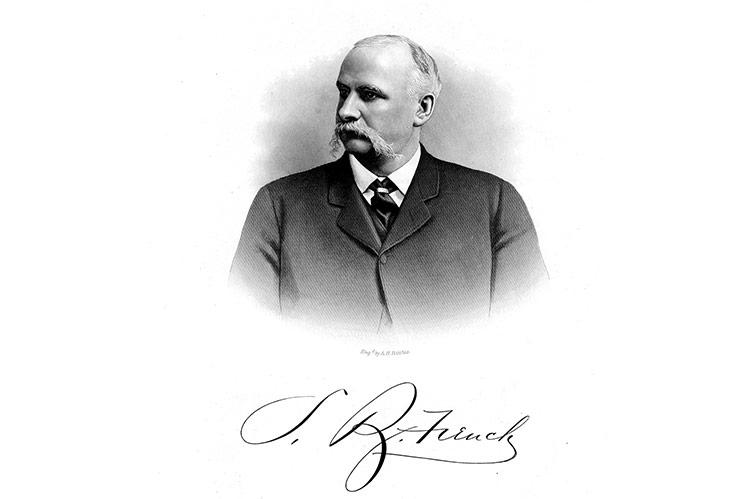 The portrait of Stephen B. French seen here appeared in W.W. Munsell’s “History of Suffolk County, New York.” Stephen Bull French (1829-96) and his brother, Hannibal French, owned the last whaling ship to leave Sag Harbor, the Myra, which was condemned in 1874. Stephen may be best remembered as the purported host for President Chester A. Arthur.

His father, Peter, came to America as a French-speaking orphan who was given the last name French. Like many local men, Stephen started out working in the whaling industry, first for Capt. John Budd and later sailing for Capt. Thomas Brown, a merchant.

In 1849, he traveled to California in search of gold, operating a hotel there with some success. After three years, he sailed for Hawaii, returning to Sag Harbor in 1854 and marrying Mary Ann Hand. During this time, French and his brother invested heavily in many local enterprises and whaling vessels.

Stephen and Mary Ann French had three children. She died in 1866.

French then remarried and threw himself into politics, dividing his time between Manhattan and Sag Harbor, where he helped establish the board of education and was instrumental in bringing in the Long Island Rail Road. His political activities earned him several patronage positions in Suffolk County and New York City. He served as collector of customs in Sag Harbor, Suffolk County treasurer, appraiser of the Port of New York, and police commissioner in both Sag Harbor and New York City (from 1879 to 1889).

Regarding Chester A. Arthur, their close friendship as fellow machine politicians is well documented. Local lore holds that Arthur stayed with French at his home in Sag Harbor, but establishing when that visit took place has been difficult.

In 1896, Stephen B. French died at home of a self-inflicted gunshot wound. Obituaries described him as the embodiment of “progress” for Gilded Age New York.

Andrea Meyer is a librarian and archivist with the East Hampton Library’s Long Island Collection.