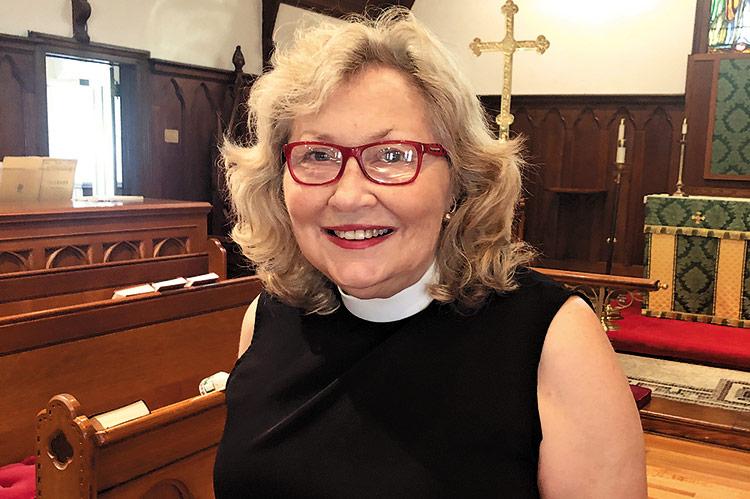 “There’s nothing Christian about any of this,” the Rev. Karen Ann Campbell of Sag Harbor’s Christ Episcopal Church said of a new “public charge” immigration ruling that could bar people who seek or may seek assistance from legally entering or remaining in the U.S.
Christine Sampson
By Christine Sampson

On a recent Sunday morning, the Rev. Karen Ann Campbell of Sag Harbor’s Christ Episcopal Church delivered a sermon reminding her congregation that “we were all once strangers” so “we must therefore always welcome the stranger.”

Lately, though, Ms. Campbell says, strangers are being vilified — turned away — by the government of the United States, a nation that was first built on immigration, and whose founding values were heavily steeped in Christian tradition. And President Donald Trump’s Aug. 14 immigration policy decision, called the “final ruling on public charge,” puts legal permanent residency status even further out of the reach of immigrants, local advocates say.

The new ruling is to go into effect on Oct. 15. At its core are tougher restrictions for those who are seeking to enter the U.S. or change their legal immigration status; they can be denied if they currently use, have used in the past, or are deemed likely to use public benefits for 12 months or more in a 36-month period.

“Now, people who are accepting assistance from the U.S. government are not going to be able to proceed toward citizenship,” Reverend Campbell said. “There’s nothing Christian about any of this.”

The age, education, financial assets, family status, and health of someone applying to enter the U.S. will also be taken into consideration, weighted as “heavily negative” to “heavily positive.”

Melinda Rubin, an immigration attorney with the Hampton Bays firm Zwaik, Gilbert & Associates, said the public charge ruling will make it a lot harder for people to gain legal residency in the U.S.

“It favors the young, well-educated, rich people,” she said, “and I see a racist undertone.”

Before the public charge ruling was published, the federal government sought input during an open comment period last year. It received about 216,000 comments, most of them in opposition to the proposed changes. Among those comments were several petitions thousands of names long, dozens of them from residents in the East Hampton area, including Laura Anker.

“I think the public charge law is racist,” said Ms. Anker, the distinguished service professor of American studies at the State University at Old Westbury, whose research and writing focus is on immigration, including the changing demographics of East Hampton.

She described herself as the descendant of “immigrants who worked their butts off for their kids and grandkids.”

“Their values are the values of community. We depend on them as a nation,” Ms. Anker said. “A threat to those values is a threat to what’s great in Amer ica. We’re attacking the very essence of what’s great about our country and we’re emboldening the sins of our country, which were racism, slavery, genocide against Native Americans, and the hostility that every single immigrant group experienced.”

The updated ruling expands the list of public benefits that can disqualify an applicant from entering the U.S. Not only will direct cash benefits like Temporary Assistance for Needy Families (TANF) and supplemental security income count, but Supplemental Nutrition Assistance Program (SNAP) benefits, federal Section 8 housing benefits, and Medicaid have also been added to the list. That’s why experts have described a “chilling effect” on the immigrant community as a result of the new public charge rules.

“It will cause widespread fear or exacerbate the widespread fear in immigrant communities right now that if they accept any kind of government help, or anybody in their family does, that they will be denied permanent residency,” Ms. Anker said. “It will stop people from asking for help when they need it . . . and it builds prejudice. It builds division in the nonimmigrant community.”

It is unclear whether the public charge ruling will fully take effect, as many advocacy groups and nonprofit organizations are planning to sue the government over it, Ms. Rubin said.

“It seems like it targets the most vulnerable people in our country. We’re not even talking about undocumented people here,” Mr. Strong said. “We’re talking about people who are trying to adjust their status or come here legally. It also disproportionately affects their children, who are most often American citizens.”

He said there is also a lot of confusion over how the rules will be implemented, saying there is some level of subjectivity based on a Department of Homeland Security adjudicator’s evaluation of a residency application.

But Manny Vilar, the chairman of the East Hampton Town Republican Committee, disagreed, saying the new public charge rules are clear and objective.

He compared having open borders to leaving the front door of your house open when you leave “and people can come and go as they like.”

Policies like the public charge ruling have the effect of protecting benefits and ensuring their long-term viability for citizens who truly need help, Mr. Vilar said.

“It’s more than an obligation. We have a duty to our citizens that we have a social safety net for them to help them, to enable them to get through their time of need,” he said. “Right now it sounds like our system is on the verge of collapse financially, and if that’s the case, we’re not living up to our duty and obligation to citizens.”

Ms. Campbell called upon local churches and grassroots organizations to “step up and fill the void” left by what could be restricted access to public benefits for many.

“Churches kind of at their inception were the only safety net for people,” she said. “That’s why churches built hospitals. They were in the business of healing and feeding and caring for people’s needs.”

“There are so many people who live so close to the wind that work extremely hard. I’m not speaking specifically about the Latino community,” he said. “People have chosen professions that don’t often pay lots and lots of money. It just feels like there should be a lot of empathy for people who are having these programs taken away from them. I’d like to believe that there is.”