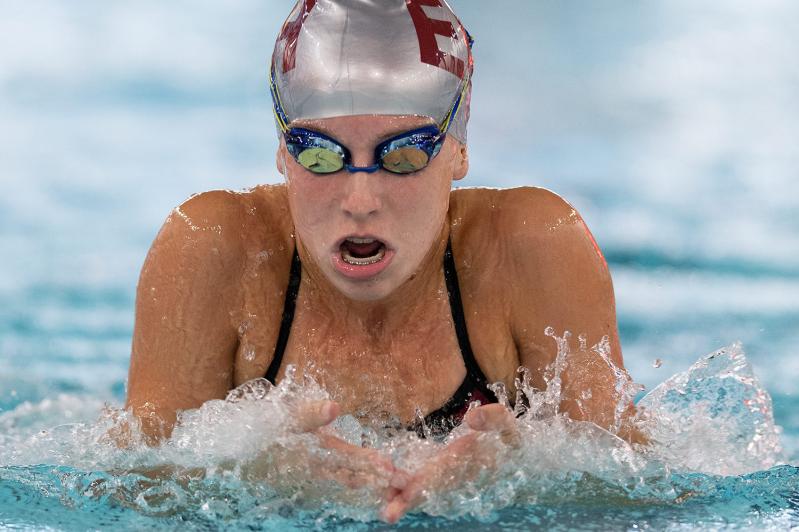 Although only a ninth grader, Jane Brierley is one of the girls swimming team’s toughest competitors.
Craig Macnaughton
By Jack Graves

All 11 of East Hampton High School’s teams will be on display here this week — beginning today with boys and girls cross-country, girls swimming, and boys volleyball — inasmuch as it’s homecoming for East Hampton’s alums, the 1965-66 boys basketball team, to be inducted Saturday into the school’s Hall of Fame, among them.

Besides that basketball team, which, at 19-2, sported the county’s best record that year, the Long Island-champion 1993 field hockey team, two veteran coaches, Bill Herzog and Kathy McGeehan, and two athletes, Emily Hren and Nicole Fierro, are also to become Bonac Hall of Fame members at ceremonies in the school’s auditorium Saturday morning following a Hall of Fame breakfast.

Girls swimming got into the win column this week by a score of 89-73 over its first league opponent, West Islip, at the Y.M.C.A. East Hampton RECenter.

In an emailed account, Craig Brierley, the team’s coach, said of Friday’s win, “West Islip’s record was 2-0 coming in, so our girls were excited to race. They went right after it by going one-three in the opening relay, thus taking a 10-4 lead, a lead they would not relinquish. Bonac girls won nine of the first 11 events, displaying the competitive racing skills they have been honing in practice.”

Caroline Brown, East Hampton’s chief distance swimmer, who won the 200 and 500 freestyle races and was a member of the winning 400 free relay team, thereby earning 20 points for the team, got the captains’ nod as swimmer of the meet.

Moreover, Catalina Badilla swam county-qualifying times in the 100 freestyle and in the 100 backstroke, as did Julia Brierley in the 100 breaststroke.

The team’s homecoming meet will be today with West Babylon in the Y’s pool at 5 p.m.

There are 23 on Brierley’s team — seven seniors, eight juniors, three sophomores, four ninth graders, and one eighth grader, Isabelle Caplin of Pierson, who sang the national anthem before the meet.

In other action today, there will be an invitational cross-country meet run on the 2.5-mile course at the high school that the boys coach, Kevin Barry, laid out recently. It’s flat and fast, and presumably because of that it’s to the cross-country runners’ liking. A two-time state champion, Kal Lewis, is to be among the competitors, as are his Shelter Island teammates. The Southampton and Ross School teams will also be here.

At about the same time as the cross-country meet, which is to say at 4:30, there will be a teacher-student benefit soccer game on the turf field, a fund-raiser for Kick Out Cancer. The swimming meet, as aforesaid, will be at 5, the same time that the 6-1 boys volleyball team is to play Ward Melville in the high school’s gym.

Boys soccer, versus Islip, girls volleyball, versus Sayville, and girls tennis, versus Eastport-South Manor, are all to play at the high school tomorrow at 4:30.

Jayvee football, girls soccer, and field hockey are to be at home Saturday. Football will take a 2-0 record into a 10 a.m. game with William Floyd’s freshmen. Field hockey, which has won four of its last five games — defeating Pierson, Greenport-Southold, Hampton Bays, and Port Jefferson, while losing to Harborfields — is to play Miller Place under the lights on the turf field at 6 p.m.

“We’re a young team and doing okay — the girls are getting it,” Ficeto said during a practice session Monday afternoon, though it would be tough absent an upset to make the playoffs, she added. East Hampton was to have played 5-2 Rocky Point on the grass field adjacent to the tennis courts yesterday.