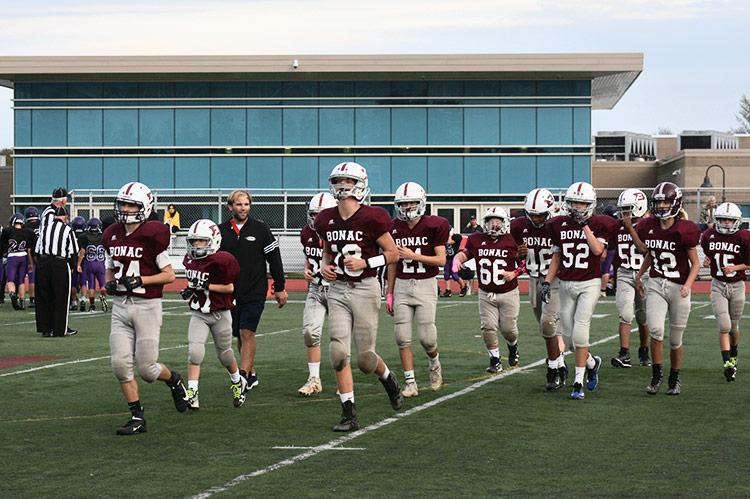 The last varsity team McKee coached was in 2016. The bottom fell out numbers-wise the next year, the prospect of moving up to Division III, the “black-and-blue division,” perhaps fueling the falloff, he thinks. East Hampton has had jayvee teams, but no varsity teams, last year and this.

With the improved numbers of late has come success, at both the jayvee and junior high levels. McKee’s jayvee took a 5-1 record into Tuesday’s game at Port Jefferson, and Dave Fioriello and Andrew Daige’s East Hampton Middle School team improved to 4-0-1 as a result of defeating Hampton Bays 36-6 here Friday, thanks largely to touchdowns engineered by the tall eighth-grade quarterback, Charlie Corwin, Michael Locascio, Jack Cooper, and Milo Tompkins.

With 30 to 35 players on each of those teams, and with 70 or so of his flag football players in the fifth and sixth grades, things could be looking up for Bonac football, McKee said, assuming the sixth graders stick with it.

“Next year, we’ll definitely move this [jayvee] group up to the varsity,” he said, “and we ought to have enough for a jayvee, with 18 eighth graders on the junior high team and with the 11 freshmen we have on this year’s jayvee. That’s 29 right there. We ought to have 30 to 35 on the varsity.”

As in the past, he said, East Hampton would petition Section XI, the governing body for public high school sports in Suffolk County, to play down in Division IV, with such teams at Southampton, Greenport, Center Moriches, and Port Jefferson, provided it forgoes the playoffs. He added that he thought the powers that be would be more amenable to such an arrangement now than they had been in the past.

Such a move would revive the East Hampton-Southampton rivalry that dates to 1923, the memory of which has in part inspired McKee to play the jayvee’s last game of the season, on Monday, at Herrick Park in the heart of East Hampton Village, the traditional scene of Saturday afternoon football games here until — in the late 1970s, he thinks — they were moved up to the then newly built high school on Long Lane.

“I never played a varsity game at Herrick,” said McKee, who graduated from the high school in 1983, “though I did play in junior high games there. I think the last varsity game played at Herrick was in 1977, then came the austerity year in ’78, and after that all the games were at the high school.”

“It was such a great atmosphere at the park — people walking by on Newtown Lane would come to the games . . . it was a great small-town thing. It’s been 42 years, you say? I’d like to bring that back — a throwback game. We’re trying to get the band to come, and as many alumni as we can get . . . we want to revive the community support.”

He had hoped flag football for kindergartners through sixth graders, which he began here a few years ago — presciently, it would seem, given the push now to ban tackle football statewide for children 12 and under — would serve as a transition to junior high tackle football, McKee said.

“This year, as I said, we’ve got almost 70 kids in that fifth-and-sixth-grade group, so we’ll see. When I left that junior high game at the half the other day, I saw 30 or so kids playing pickup on the grass fields nearby. I hadn’t seen that in quite some time.”

Monday’s game at Herrick Park, with Shoreham-Wading River, is to be played under the lights beginning at 5 p.m.