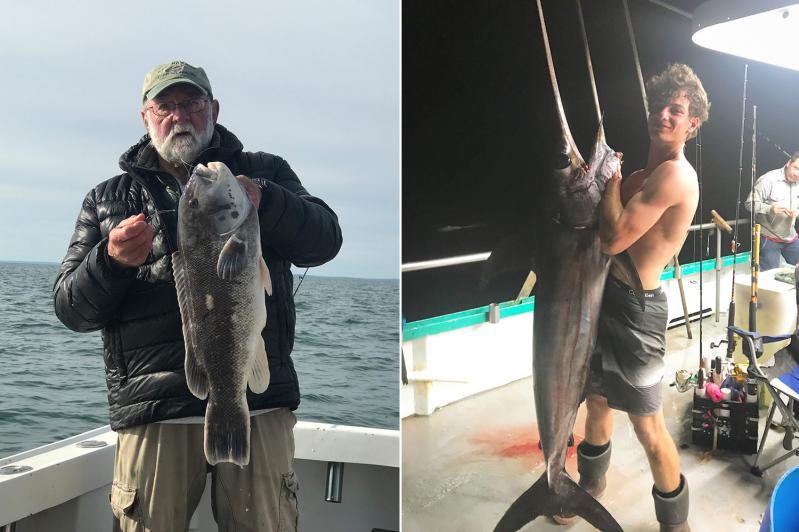 While fishing with The Star’s “On the Water” columnist on Sunday morning, Al Daniels of Sag Harbor landed this 10-pound blackfish. Jon M. Diat/A good number of swordfish appeared in offshore waters this season, including this 100-pounder landed by Drew Lipp of Amagansett. Viking Fleet
By Jon M. Diat

Given the recent frequent blasts of windy weather of late, I figured the time was right to do some much-needed maintenance on my lobster gear, and more important, my scallop dredges. All eight of my iron dredges have been used and abused for several decades. The metal rings on the bottom of the mesh bag are almost worn thin, while the mesh itself is frayed and tattered.

The season for harvesting scallops in state waters commences at sunrise on Nov. 4. If you are a bit curious, sunrise will commence at 6:23 a.m.

Last year a few scallopers thought it was a good idea to get a head start on the season by going out after midnight near Robins Island. But officers of the New York State Department of Environmental Conservation were waiting in ambush in their overpowered olive green speedboat. Several people were hit with hefty fines. I can’t fathom why you would want to haul heavy iron dredges in the dark by hand, but hopefully these folks learned a lesson. Crime does not pay.

The D.E.C., while understaffed, does a good yet underappreciated job on our waters. I always found its officers courteous while keeping a good sense of humor.

The last time I was boarded was on the opening morning of scallop season two years ago in Noyac Bay. I showed my boat registration and recreational shellfish licenses to one of the officers tying up to my boat. I shook hands and offered them some water, we made some polite small talk, and three minutes later they off-boarded to check on another nearby scalloper.

A few months before that, the same three officers came by my boat while I was diamond jigging bluefish at Jessup’s Neck. They were curious about my catch and what fish I had. I told them that I had caught a few blues, but that I had thrown them all back.

I invited them to come aboard and check for themselves, but they declined. I told them that I penned the fishing column for this newspaper and they had a lengthy chuckle as I told them I would be reprimanded by my editor if I were to be cited for breaking any fishing regulations. They, on the other hand, said that they thought it would make a good story. I don’t expect to ever write that one. Sorry.

As per the upcoming scallop season, the rumors along the dockside paint a grim picture. An apparent die-off seemed to have occurred back in the summer, killing a high percentage of legal-size scallops. That said, many who have done some preseason scouting report that there are plenty of juveniles for next year, if they survive. Only time will tell.

As for the current fishing scene, the action has been rather solid in between the bouts of windy weather.

“There have been some big stripers along the sand beaches all week up to 30 pounds,” said Harvey Bennett at the Tackle Shop in Amagansett. “Napeague State Park and Main Beach in East Hampton have been the hot spots of late.” Bennett said that fishing for porgy, along with striped bass, remains strong to the east, while blackfish action has been good near Gardiner’s Island.

“Some squid are being taken at night at the Navy Dock in Fort Pond Bay and in Three Mile Harbor, while schools of bluefish and false albacore are still roaming the bay,” he added.

Bennett also announced details of two fishing contests to help underprivileged children at a baseball camp in the Dominican Republic. The first contest is for the largest fish landed (any species of saltwater or freshwater fish can be weighed in) by Dec. 15. The lucky winner will receive a 10-foot Shakespeare fishing rod.

The second contest is for the largest striped bass taken on the final day of the season (Dec. 15). The $20 entry fee also includes a one-year membership in the Amagansett Sportfishing Association and entry into a raffle for a Penn 706 surf reel.

“This is all very casual with no hard rules,” he said. “I will even accept pictures of fish and estimated weights. This is just to have some fun and raise a few extra bucks for some very deserving kids down there.”

Bennett hopes to ship off a large container of school supplies, clothes, and shoes, along with donated baseball and tennis equipment to needy kids and families by the first week of November so that it arrives in time for Christmas. He figures it will cost $1,200 to ship all of it. “I’ve raised $750 so far,” he said. “Hopefully the sign-ups for the tournaments will cover the rest of it.” Bennett certainly has a big heart.

The fishing for blackfish, which opened early last week, is off to a hot start. Limit catches, primarily in shallow water, have been the norm with the best action of late by Fishers Island, Gull Island, and Plum Island.

I took a few people out on Sunday morning and we were rewarded with fish up to 10 pounds. The bite was steady throughout the incoming tide and we left our spot with the fish still on the chew. A very nice way to start the season.

However, a word of caution to blackfish anglers: If you are fishing in Long Island Sound, the daily limit is three fish over 16 inches per person. For all other areas in New York waters, fishermen can keep four for the table. Take it from me, the D.E.C. is out there. You have been warned.

“The action on blackfish has been really good,” agreed Ken Morse at Tight Lines Tackle in Sag Harbor. “When the conditions allow, people are getting their limit of fish.” Morse said that a few stripers can also be had along the sandy ocean beaches and that some bass and blues can be had on the troll in the South Ferry slip.

Bottom fishing out at Montauk continues to be productive. “On Sunday, the dogfish left us alone and the fishing was great,” said Capt. Derek Dacuk of the Viking Fivestar. “There were plenty of jumbo sea bass to be had for all, with the largest in the five-pound-plus range. We also caught some porgies and managed a handful of keeper-sized codfish with just as many shorts, which tells us the cod are coming in and we can expect a good season. Everyone on board ended up with their sea bass limit and some beautiful big fish.”