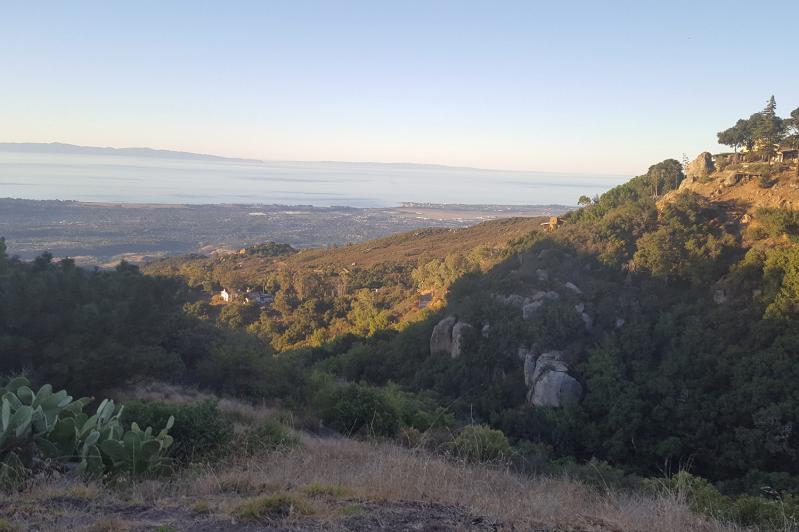 Larry Penny traded his view of Noyac Bay for one of the Santa Barbara Channel this week.
Julie Penny
By Larry Penny

I wake up, look out the window, and instead of Noyac Bay and North Haven beyond, I’m looking at the Santa Barbara Channel and Santa Cruz Island looming up in the background. One day it’s one view, the next day another. Three thousand miles apart, but the water is blue, the sky cloudy, the country one and the same.

I’m 1,500 feet up in the coast range looking down at the city of Santa Barbara, not 30 feet up looking down at the neighbor’s house across the street and the Peconic Estuary beyond. What a difference a day makes. This would not have been possible 70 years ago, when I was still a boy.

What will it be 50 years from now when I’m dead and covered over with dirt? Geologists tell us that the seas will be much higher; climatologists, that the weather will be much warmer. I’ll be dead, but still writing nature notes, if only posthumously.

Yes, it’s a marvelous world we live in, no matter how hard we inept members of the species try to screw it up. Is there a benevolent God watching our unhuman antics and correcting for them, or are we just stumbling along one step at a time trying to keep out of our own way? That is a question I will never be able to answer in the few more years allotted to me. In this day and age when we are about to go out into space the way we used to go to the neighborhood beach to picnic, we still have a lot to learn and master. The thought that we may never get there haunts me; I will never be able to know one way or another.

So I take the remaining days one day at a time, searching for the solution while the other half of the brain says there will never be one. In the meantime, might as well enjoy the birds, bees, and the topology, put up with the foolishness as we strut and fret our way across the stage, as Shakespeare said with such aplomb centuries ago.

And why not? The birds and bees, except for some, have made it all these millenniums to the present day without losing their ability to make nests, rear young, pollinate flowers, and make honey. Whether wild or tamed, they keep us going, stock our pantries, wake us up in the morning with their music, remind us to go to bed at night.

Santa Barbara is a superhuman who carries on with fun and fancy. It’s kind of a paradise, nirvana, utopia, Shangri-La, Eden of a place all rolled into one. Enjoy it while you can, don’t try to change it, let it evolve along its present direction, wait and see what happens. Will it last? I hope so.

Eastern Long Island, still rural, Santa Barbara, pearl on the Pacific, wherever one is at home, there is a bit of paradise in the past, present, or future, The trick is to be patient, look beyond the befouled, the corrupt, plant a garden to live in, enjoy nature while keeping in mind that life is never static, beauty is enigmatic, it comes and goes on a whim.

We are floating on continents that are floating on a waxy, slippery interface of stone and sand, heading toward Asia at less than a centimeter a year. No one knows if we will ever get there. Whether the Earth will collide with another massive chunk of rock that hit in the western Gulf of Mexico that did in the dinosaurs and much more 130 million years ago. It could happen again. One never knows until it’s almost upon us.

The mountains, oceans, deserts, grasslands, taigas, lakes, and the like are here now, to be enjoyed and even worshipped, and when the last soap opera, horror movie, novel, or rap song has run its course, they will still be here, much the same as when we humans learned to move about on two feet millions of moons ago.

Billionaires are not so different from the rest of the 99 per cent. They have two legs, two arms, two ears, two eyes, two knees, two armpits, and so on. They are not special and their names on bronze plaques will not last forever, just like earth’s salient geologic features. If there was such a thing as reincarnation, many of us would prefer to come back as a bird, tree, or even a simple human being, but not as a billionaire or movie star. Celebrations will continue, but celebrities and their adoring paparazzi will go the way of the dinosaurs. Voilà, and salutations from heaven on earth.