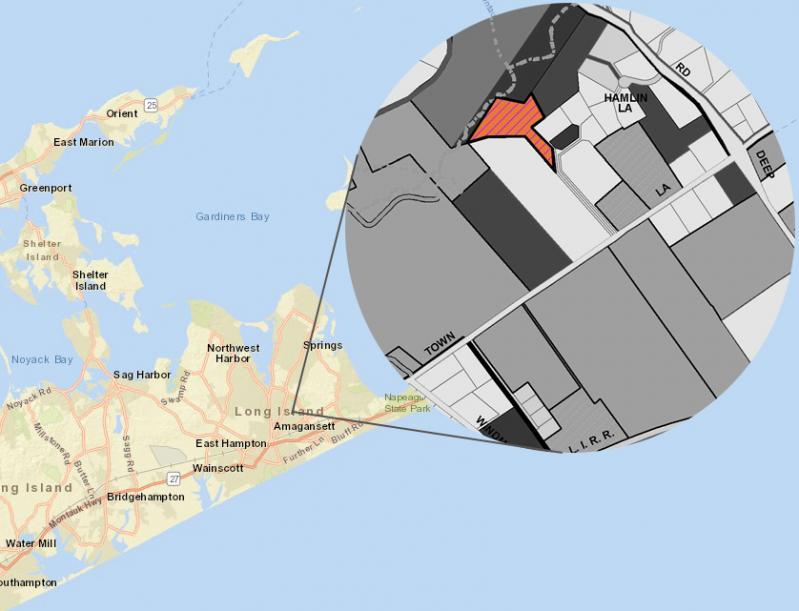 An irregularly shaped parcel of land near Stony Hill Road in Amagansett is at the center of a dispute pitting its owners against the Peconic Land Trust, which holds an easement on the property.
The East Hampton Star
By Jamie Bufalino

The owners of nearly six acres of reserved land in Amagansett who have been prevented from cutting down trees, preparing a farm, or doing any other work there since the Peconic Land Trust initiated a lawsuit against them in August, asked the court last week to dismiss the suit and filed counterclaims against the land trust.

The property near Stony Hill Road is protected by an easement granted to the Peconic Land Trust in 1995. The easement prohibits the removal of trees, shrubs, or other vegetation from the reserved area unless they are “dead, diseased, dangerously decayed, or damaged,” according to its language. It also seeks to preserve the land for farming, “provided that such agricultural activity shall be conducted in accordance with the purposes of this easement.”

Randy Lerner, the owner of several Amagansett properties including Amagansett Square, and Michael Friedler, are the lone members of 341 Town Lane L.L.C., the limited liability company that purchased the land on July 31, said Anthony Pasca, their lawyer. In an affidavit, Mr. Friedler, who goes by the name Fred, said he is the L.L.C.’s manager.

The owners contend the easement gives them the legal right to clear the land for agricultural use. Within days of acquiring the property, Mr. Lerner and Mr. Friedler hired crews from Marders to cut down trees. In an Aug. 30 affidavit, Mr. Lerner said the crews had been directed to begin “readying the land for farming, and, more immediately, a proper cover crop.”

In the Peconic Land Trust’s suit, which names 341 Town Lane L.L.C. and Mr. Lerner as defendants, the trust asked for a legal declaration that the owners are in breach of the easement, for a temporary and permanent injunction against violations of the easement, and for restoration of the property at the owners’ expense. The trust estimated that 75 to 125 mature, healthy trees had been cut down, causing damage to the property in excess of $100 million. It also sought punitive damages of at least $1 million per felled tree.

The trust won a temporary restraining order on Aug. 8. Mr. Lerner and Mr. Friedler sought to have it dismissed or modified, but that motion was denied on Sept. 12 by State Supreme Court Justice William Ford.

The restraining order has prevented the owners from “touching a single blade of grass or grain of soil on the property,” Mr. Pasca said in his motion last week. In his previous affidavit, Mr. Lerner said the inability to work on the land has elevated the risk of topsoil loss and soil erosion. “Dead trees litter the property and need to be removed properly and carefully in order for the next phase of work to begin,” he said.

In his counterclaims against the land trust, filed on Oct. 7, Mr. Pasca asked for a legal declaration that his clients have a right to farm the property, and to prepare it for farming by clearing trees when necessary, and installing deer fencing. He also asked to have the easement’s restrictions against such actions declared “unenforceable,” and to find the land trust liable for damages sustained from the trust’s “unlawful interference” into the L.L.C.’s right to farm, and its “malicious prosecution” of the matter.

Mr. Lerner should not be a party to the land trust’s suit, he said, because it is 341 Town Lane L.L.C. that owns the land, and would be responsible for the alleged breaches of the easement. “An individual member of an L.L.C. cannot be liable for the L.L.C.’s contractual obligations,” he said.

Mr. Pasca said he had sent a letter in August to Leonard Benowich, the lawyer for the land trust, in which he asked for Mr. Lerner to be removed as a defendant. He received no reply, he said.

“They attacked him personally, they vilified him,” said Mr. Pasca on Friday. “They accused him of criminal behavior, and for what? For farming the land?”

John v.H. Halsey, the president of the land trust, said in an email that the organization would file a legal response to the claims in the coming weeks.

In addition to having Mr. Pasca make their case in court, Mr. Lerner and Mr. Friedler have distributed two letters around town in which they explain their motivation for cutting down the trees. (Mr. Pasca confirmed the authorship of the letters.) In the letters, which are headed “The Tree Forgives the Plough,” the men said there is a common misperception that conservation applies only to things like trees and wetlands. “The Town of East Hampton specifically includes ‘prime agricultural soils’ as among the natural treasures,” they said.

Referring to the tree cutting on their land, they said an outcry “would be understandable if it was done in the non-agricultural woodlands,” but the trees in question were on the agricultural reserve. “The trees had to be cleared, so protected farmland could be restored to actual farm uses.”