Skip to main content
Published 9 months ago
Last updated 8 months ago
“This one killed us,” Ficeto said after Monday’s game 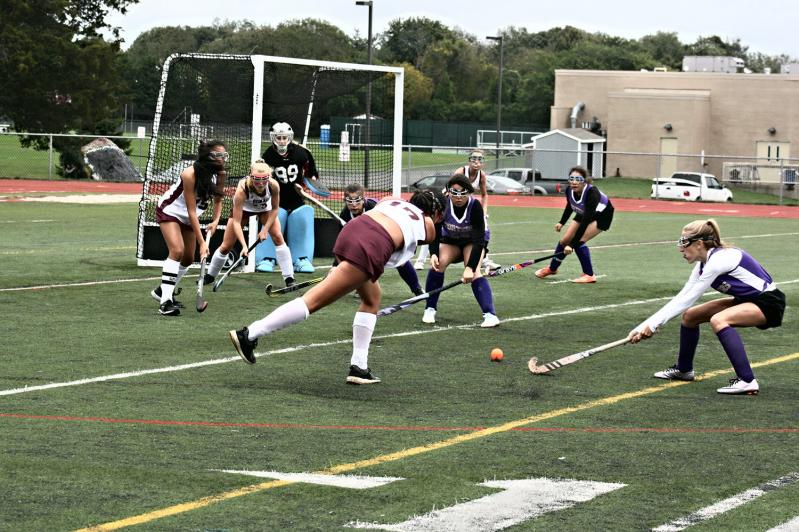 Lucie Sarrazin, a junior midfielder, sent the ball goalward as three of her teammates made ready to pounce during Friday’s 6-1 rout of Greenport-Southold here. In front of the goalie is Hannah Medler, who finished with five goals on the day.
Jack Graves
By Jack Graves

A win Monday would have enabled East Hampton High’s field hockey team to stay on the cusp of a playoff berth, according to its coach, Nicole Ficeto, though Port Jefferson, which had been outplayed for 56 minutes, dashed that hope in the 57th with a goal that resulted from a corner play, the Royals’ first corner play of the game.

There was much soul-searching on the part of Bonac’s players afterward, and some tears, lamenting the incontrovertible fact that, despite 16 corner plays, eight recorded shots on goal, many free hits taken from outside the circle, and countless crosses that passed in front of Port Jeff’s cage unclaimed, East Hampton had not been able to finish.

“This one killed us,” Ficeto said. “The playoffs are out of the question now. It’s always one of those games with Port Jeff. We beat them at their place 2-1. . . . They’re gritty.”

When a spectator, impressed nevertheless by the way her charges defended and moved the ball, asked if her team, all things being equal, wouldn’t be considered of playoff caliber, Ficeto, mindful of its lopsided losses this fall to Miller Place, Rocky Point, and Harborfields, shook her head. “No, not this year. Maybe next year . . . or the year after.”

Talent abounds the length and breadth of the field, though when it came time to bury a shot Monday, none of the attackers, a number of them whiffing as the ball passed by, could quite get it done.

“Sticks down, get your sticks down!” Ficeto and her assistant, Caroline Schaefer, were to yell out repeatedly, and, during a timeout with eight and a half minutes left, Ficeto, having laid a stick down flat on the turf, demonstrated what she meant: “Block it with your stick and push it in.”

Moments later, after play had resumed, two of her forwards, rather than do as instructed, waved their sticks as a left-to-right cross from Hannah Medler zipped by them.

And so it went, and so it had gone, with Arabella Kuplins, in the 41st minute, and Melina Sarlo, in the 49th, having the best chances, each of their shots going wide. Then, with three minutes remaining in regulation, the visitors were presented with their first corner play of the day. Tia Weiss, East Hampton’s able goalie, stopped the first two shots, but could not parry the third, the ball finding its way to the back of Bonac’s cage on the right side.

Going for 0-for-16 on corner plays is memorable, painfully so, though on the upside, Medler’s five goals here Friday during a 6-1 rout of Greenport-Southold, might well be a school record.

Ficeto said she didn’t have enough history with the program to say yea or nay, though Medler’s tally on Friday

“certainly ought to be up there in the top three,” she ventured.

Monday’s loss dropped East Hampton’s record to 5-6 on the season and improved Port Jefferson’s to 4-7. As Ficeto said, East Hampton’s day will come, and in the not too distant future. Medler and Kuplins are sophomores; Sarlo and Emma McGrory, eighth graders who were brought up from the junior varsity a couple of weeks ago, quickly proved themselves worthy by scoring goals in separate games, Chloe Coleman, a ninth grader, anchors the team’s defense, and Ficeto?s niece, Caeleigh, a sixth grader who is expected to move up to the varsity next fall, is in her second season tending goal for the u-14 Strong Island indoor travel field hockey team up the Island.

East Hampton was to have played Hampton Bays here yesterday, and is to finish up the season at Harborfields tomorrow.