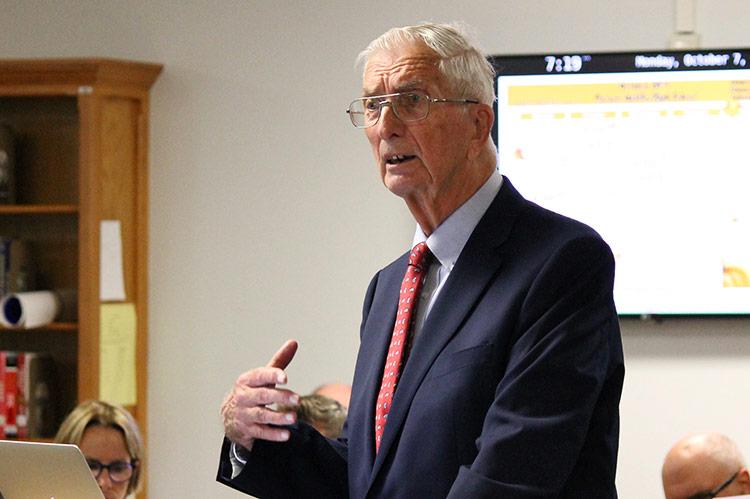 With the retirement of its superintendent about three months away, the Sag Harbor School Board agreed Monday, on the recommendation of the recruitment firm leading the search process, that it would seek an interim superintendent until a permanent successor can be found.

The board voted 6-1, with Brian DeSesa, one of its members, voting “no,” to move forward with the decision to hire an interim superintendent and approving a set of criteria outlined by School Leadership, the search firm.

Charles Fowler, the president of School Leadership, told the school board it would begin the search for an interim right away — including communicating the post to current Sag Harbor administrators and staff members — and would formally advertise the superintendent’s post in late December.

Mr. DeSesa said he voted “no” on the resolution Monday because he does not believe the district should hire an interim superintendent.

Mr. Fowler presented the results of the online search survey that was conducted in September. There were 168 responses, including 86 parents, 56 non-parents, 24 teachers, 5 students, and others.

Respondents were asked to prioritize their ideal candidate’s skills and qualifications from a list of 16. In order of preference, people ranked budget experience as the top priority, followed closely by leadership experience in a similar school district, strategic planning, classroom experience, and a good working relationship with an elected school board.

Based on those results, as well as the input of 117 people who attended various meetings about the superintendent search, School Leadership developed five main criteria for the job advertisement. The district is now seeking “a strong instructional leader with successful classroom teaching and administrative experiences, including budget and planning [and] serving diverse and global learning communities similar to Sag Harbor,” an “excellent communicator,” and “a leader with an open-door approach who is accessible to all district stakeholders.”

So far, said Diana Kolhoff, a board member, “I’m impressed with the work that [School Leadership] has brought back.”

Also on Monday, Julian Barrowcliffe, a parent who ran for a seat on the school board earlier this year, asked the district to find a better educational solution for one of his sons, a 5-year-old who has autism, than enrollment at a school in Ronkonkoma. His son, Mr. Barrowcliffe said, is nonverbal and sits on a bus for hours to and from school each day.

He called upon school officials across the South Fork to collaborate on a regional academy for children with autism, and to train more local educators on how to work with this population of students.

“We need a hub-based program benefiting from scale,” Mr. Barrowcliffe said. “I keep hearing the refrain that it is hard to find qualified people out here. But let’s be clear, the school district is legally required to provide these services, so not being able to find them isn’t an excuse. Clearly what we need to do is train them locally. . . . Asking people UpIsland to relocate here isn’t going to work.”

Dr. Carleen Meers, who oversees special education programs for Sag Harbor, said Mr. Barrowcliffe’s comments were “heartfelt and it resonated with me.”

“One of several reasons why I decided to accept my current position here in Sag Harbor was to support increased specialized programs for students with complex needs, closer to their/my home community,” Dr. Meers said in an email yesterday. “Although the number of students in need of these types of programs are relatively low, and many are participating in great programs, it remains a priority to decrease the time some of our students are traveling to receive these quality services/supports and increase the time they are actively engaged in our home community.”

She said the local school districts are “looking to collaborate to provide these programs.”

“I do feel we have the potential to achieve this through the creation of shared services, mutually constitutive relationships, strategic partnerships, and quality professional development opportunities on the East End,” Dr. Meers said.

Ms. Graves also provided a brief update on the outdoor workout station behind Pierson Middle and High School that a local nonprofit organization, the Dawgpatch Bandits, donated in memory of their friend Michael Semkus, a Sag Harbor native, teacher, and sports coach who died in 2016 of an opioid overdose.

As the project neared completion three weeks ago, a stop-work order was issued by the school attorney after it was determined that the workout station needed architectural plans designed by a school district architect, rather than the plans that had been donated by a local architectural firm.

Ms. Graves said Monday that the district’s insurance company would not back the workout station unless that additional step was taken. She said the current school architects, IBI Group, have been asked to draw up new plans that will be evaluated by the insurance company.