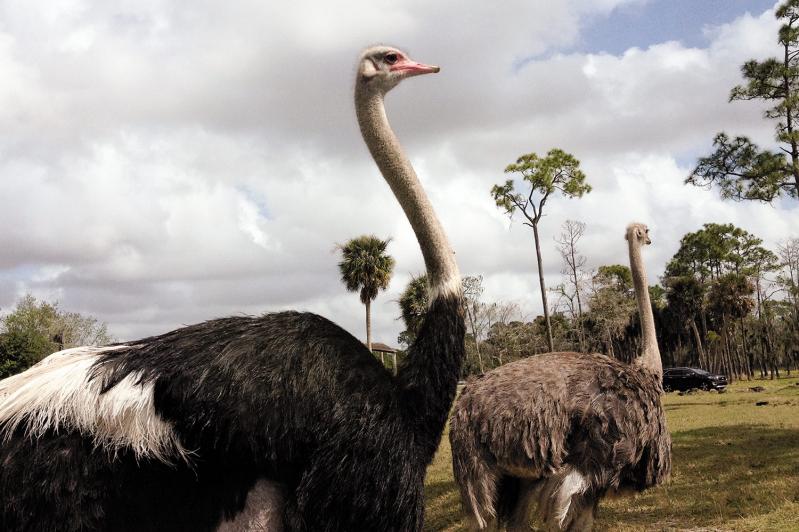 Why are there four different populations of flightless birds, like the ostrich, above, on three different continents? Is it because there was once one supercontinent whose pieces drifted apart over milleniums?
Carissa Katz
By Larry Penny

How many of you know what the megagroups Pangaea, Gondwanaland, and Laurasia represent? Very few I’ll bet. In fact, I have only lately begun to study them. While atomic scientists keep searching for the smallest particle using giant cyclotrons and other apparatuses that cost billions and wouldn’t fit in the world’s most gigantic living room, we toil away and read the daily and local newspapers if we can find the time, but inevitably, end up watching some movie or “Judge Judy” on TV. Appalled at my ignorance, I took it upon myself beginning Monday to figure it all out before artificial intelligence does, even though the chance of me doing that is less than one in a billion.

Having taught life sciences at various colleges and universities before taking a 28-year position overseeing East Hampton Town’s Natural Resources Department, I have long puzzled over certain questions involving geology, zoology, botany, and ecology. One major question: How does one explain the four different populations of flightless birds and that they have been that way for millions of years on three different continents — Africa, South America, and Australia? How does one explain the fact that there are three different species of freshwater lungfish on those same three continents?

If one looks further one can find other such anomalies: How did the the cattle egret get to South America from Africa across the Atlantic Ocean and then to North America, where it is beginning to thrive, all within the last 150 years or so? If you said by flying from one continent to another, the obvious answer, you would be correct. But ratites — ostriches, rheas, emus, and the like — can’t fly and are not swimmers. And if lungfish were immersed in salt water for more than a few hours, it would be deadly.

Alfred Wegener, a geophysicist and meteorologist, proposed in 1912 the idea of “continental drift.” It was not that original, someone had suggested it in the 14th century, but it made sense to a lot of us. Simply put, there was this one supercontinent, Pangaea, that broke off and drifted apart from Africa, forming South America, Australia, Antarctica. The puzzle piece depicting South America’s east side fits neatly into the puzzle piece depicting Africa’s west side. Voilà, the theory of continental drift was born. It explained nicely both the modern distribution of ratites and of lungfish.

But then, exploring the Atlantic Ocean floor with sophisticated electronic instruments, ground-penetrating radar led to the discovery of the Mid-Atlantic Ridge, a feature that runs from the Arctic on the north to the Antarctic on the south, and sits roughly as a sinusoidal line down the middle of the Atlantic Ocean. In 1968 the idea of tectonic plates lying on top of a semiliquid hot stratum upon which the continents floated and drifted replaced Wegener’s hypothesis while explaining the continents’ breaking and movement away from one another, and simultaneously solving the lungfish and ratite separation puzzle. It was the combined hypotheses, the theory of several geologists and oceanographers, working together.

I happened to be teaching ichthyology, the study of fishes, at University of California Santa Barbara in 1966 and 1967 with Howard Reisman just before  plate tectonics became known, and barely knew of Wegener’s continental drift hypothesis. Howard, who went on to teach ichthyology at Long Island University’s Southampton College from 1969 until it closed in the early 2000s, had gone to the University of California Los Angeles before U.C.S.B. He learned there about continental drift and was able to explain the lungfish separation better than I.

Yes, we are moving away from the Atlantic Ridge at a centimeter or two a year while getting closer and closer to Asia. About 15 years ago,William Walsh, a local surveyor and master of the art of using a very accurate GPS since the very early 2000s, checked an old surveying monument in Montauk and found that its position had changed a few centimeters over time. Evidently, Montauk was drifting westerly with the rest of the continent, but ever so slowly.

The four southern continents, Africa, South America, Australia, and Antarctica, were once one in a land geologists like to call Gondwanaland, while North America was once tied to Greenland and Eurasia in what is known Laurasia. For a long time while this drifting was occurring, the oceans were much smaller, mere channels and sounds. Now we are told in several published texts and atlases that they occupy 70 percent of the earth’s surface.

What next? Hold on to your hats, folks. Apparently in the next 500 million years or so, we will become one supercontinent again, but this time much nearer the Arctic than the South Pole. Of course, you and I and our kith will be long gone and will see none of this happen, but it is a bit unsettling, to say the least. The name for such a future supercontinent has yet to be determined.

I once attended an affair at which several Brookhaven National Laboratory physicists were present. Two of them had just returned from visiting the Large Hadron Collider in Switzerland and I asked them during a lull in the activities to help me solve a puzzle that I had thought of 50 years earlier while taking a course in physics at Cornell University.

If one drilled a hole and inserted a six-inch-diameter pipe from the North Pole to the South Pole, roughly the diameter of the earth, then lined it with a non-metallic heat-resistant tube of the same length and after that dropped a steel ball the size of a golf ball down the North Pole entrance, would it gain enough velocity to overcome the pull of gravity as it moved away from the earth’s center toward the South Pole in order to escape from the exit hole there, or would it just about make it but then fall back down toward the North Pole and forever after go back and forth like a pendulum, year after year until it finally came to rest at the very center of the earth? Those erudite men who knew every subatomic particle and its properties compared to every other one gulped. They had no idea! Sweet mysteries of life.

Here’s one for you readers. If you tied a string roughly 25,000 miles in length around the earth at the equator, cut the string, then added six inches to it on each side of the cut and pulled it up with its added length so it was equally distant from the earth’s surface all the way around, what would be the distance between the string and the earth’s surface? I’ll give you the answer next week, if you can’t solve it as I couldn’t when it was presented to me by a friend.