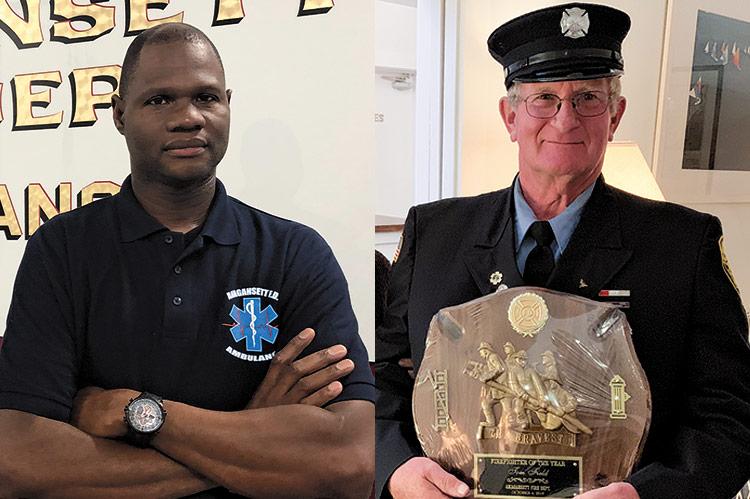 The Amagansett Fire Department celebrated its members, both the seasoned veterans and the newer volunteers, at its annual dinner at the Devon Yacht Club on Friday night.

Two emergency medical service providers were recognized that evening for their efforts. One of them, Tom Field, a longtime E.M.S. provider well known for teaching emergency medicine and cardiopulmonary resuscitation, was named firefighter of the year.

“Up in the chiefs’ office, we started debating on who was most deserving of the coveted title this year,” Chief Tedd Page said. “We scanned the list of names, and then one day we had an epiphany. Who should we honor who has done more than their fair share for this department? Who has been on more runs than anyone? Who is dedicated to their craft so much that they seem to live and breathe it day in and day out?”

Mr. Field was the answer.

He has run more than 5,200 calls in his 30 years with the department. A former advanced life-support provider, he still holds a basic emergency medical technician certification, and he remains dedicated to the department and E.M.S. This summer, from Memorial Day to Labor Day, he answered calls almost every weekend, Chief Page said.

“Tom, thank you for your years of dedication to the Amagansett Fire Department and all you have done,” the chief said before handing him a plaque.

Amagansett’s E.M.S. provider of the year may not have the decades of experience that Mr. Field does, but he has the dedication. John Brown, an E.M.T. for four years and a member of the department for six, “has shown dedication to the ambulance from both sides of the firehouse and demonstrated that they are here for all the right reasons,” Chief Page said.

Mr. Brown grew up in Portmore, Jamaica, and moved to Amagansett in 2000 for work after studying engineering. He is the maintenance superintendent at the Sea Crest on the Ocean resort. He met the Rev. Steven Howarth, then the pastor at the Amagansett Presbyterian Church, when he and his wife were preparing to have their daughter christened. The reverend was a volunteer E.M.T. with the department and gave Mr. Brown an application.

“I said I would love to be a part of the community,” Mr. Brown said. “I wanted to give back, you know?”

He said he has always cared about people and was thankful for the opportunity to join the department and receive the E.M.T. training. “To me, it’s about helping someone who can’t help themselves. It’s like the lecturers say,” he said. “We are seeing someone at their worst point.”

The last thing he expected was to be recognized. “I want to thank all the lecturers that taught me,” he said, including Mr. Field.

Also recognized at the dinner was Carl Hamilton, who received the Chiefs Appreciation Award, and members who hit a milestone in their years of service. John Hossenlopp received a 20-year pin, and Judy Bennett, Dwayne Denton, and Keith McMahon received pins for 30 years.