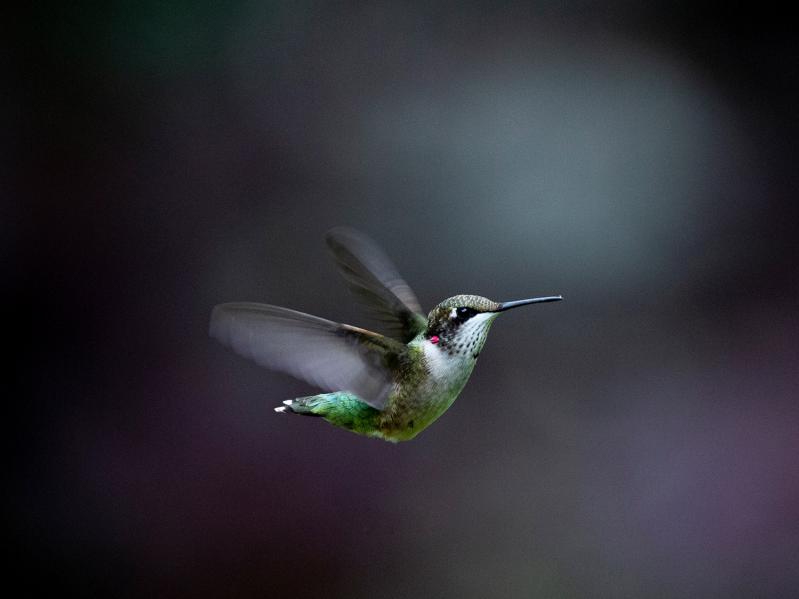 The 1957 Robert McCloskey children’s book “Time of Wonder,” about two sisters in coastal Maine, ends with a question that has teased me since I first read it to my daughters, over a decade ago.

“Where do hummingbirds go in a hurricane?”

Each spring, their return is a cause for celebration and anxiety. Still shaking off winter, we worry about getting our feeders up before they return. By the end of April, the weekly task of adding a quarter cup of sugar, to a cup of boiling water, is routine. Despite the confusion and tragedy of American life in 2022, they somehow return; like flying foil-wrapped gifts come to life.

The ruby-throated hummingbird is the only hummingbird species you’re likely to see on the East End. The female wears a shimmering green sheen down her back, with a dull, to pure white, belly. The male’s throat looks dark in poor light, but when hit by the sun, flashes like a red beacon. The bird’s head is proportionately large, as is its long thin bill, from which its tubular, straw-like, tongue exits, allowing the bird to suck up nectar. They routinely flare their black tails, which feature two white spots in the corners. Another smaller white spot behind their eye gives them a big-eyed appearance.

These nectarivores are not much longer than your middle finger.

While they may seem delicate, in fact they’re fierce, sugar-addicted adrenaline junkies, and fearless defenders of their territories. Birds made of sugar, they zip and zap around the yard, saying “Zt! Zt! Zt!” like tiny machines exhausting ambrosia. It’s hard to believe they’re real.

We associate them with movement. Their wings, according to allaboutbirds.org, beat 53 times a second and emit a low “dzzzz” sound that often precedes their appearance. They have a long migration. Our only breeding hummingbird, these pollinators nest as far north as Maine, but nearly all return to Central America. To do so, most fly clear across the Gulf of Mexico.

However, despite all that movement, they hold their bodies perfectly still as they hover, giving them a rather proper air. In August, the males defend their food sources, and use their bills like swords, taking runs at offending birds, and even bees. You can almost hear them say “On guard!” before they swoop down to attack. A certain chivalrousness attends their mating ritual as well. The female sits on a perch in early spring as the male dances before her, repeatedly tracing a large “U” in the air.

It’s not so easy to come across a hummingbird feeding “in the wild.” Apart from backyards, they frequent orchards, streams, and deciduous woodlands. Make an “okay” sign with your hand: The loop made by your thumb and pointer finger is about as big as the circumference of a hummingbird nest, which they plaster to a thin limb before they lay two tiny eggs. I’ve seen only one, at Maple Swamp in Flanders, on an oak branch. No friend to spiders, which they pluck from webs for a hit of protein, they also steal their silk to bind their nests together.

Dr. Maria Bowling, an acupuncturist and wildlife photographer in Springs, has increased her odds of seeing these birds away from a feeder by tending to a hummingbird garden for the last decade. “The hummingbirds love the flowers of the vines and all flowers native, red, and purple,” she wrote in an email. Trumpet vine, coral honeysuckle, and American wisteria all attract these birds. “They enjoy diversity and stability. The garden has grown to the point where I know that they will return because their feeding ground has diversified and expanded,” she said.

Hummingbirds know their timing. According to the National Park Service, they time their migrations based on the flowering of native plants at their destination.

Further, a 2006 study in “Current Biology” magazine, found that rufous hummingbirds, (a cousin of our ruby-throated), can learn how long it takes drained flowers to refill their nectar. They also know which they’ve recently emptied. “Such updating abilities have rarely been demonstrated in any animal,” the study concludes.

As early as this week, the males will depart from our area to begin their largely daytime migrations south. This is one of the most entertaining weeks to “feeder watch,” as they defend their last sips. They maintain perfect control with their starting, then stopping, flight patterns. Up and down, forward, and backward before they disappear into the green of a tree. Most likely, they’ve found a favorite perch, and are hopped up on sweets, looking this way and that.

After they leave, the aggressive feeder chases will end. We hope for an autumnal decline in human aggression as well, as the winds shift north marking the start of autumn, and the height of hurricane season.

So where do hummingbirds go in a hurricane? Andrew Farnsworth, a senior research analyst in the center for avian population studies at the Cornell Lab of Ornithology, said they likely shelter in place. “This could include hiding in crevices or holes, inside trunks of trees, perhaps inside buildings, or under cars,” he wrote in an email. If they’re migrating and a hurricane approaches, they could “move around and possibly avoid the storm,” but he cautioned there was “highly polarizing information about this.”

A lot we simply don’t know. The hummingbird doesn’t give up its secrets easily.