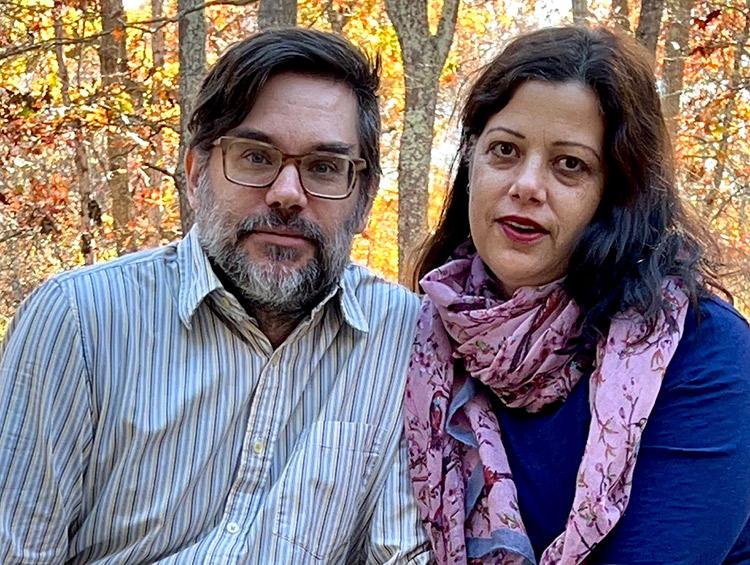 When chemotherapy for a non-Hodgkin’s lymphoma rendered Alex Huberty unable to work, he learned he was not eligible for Social Security disability benefits because his cancer is not terminal.
Huberty Family Photo
By Judy D’Mello

The good news that Erica-Lynn and Alex Huberty received was that Mr. Huberty’s cancer — B-cell follicular lymphoma — is not terminal. But wrapped in that was also some bad news on the financial front.

Mr. Huberty, who lives with his wife and their two children in Bridgehampton, was diagnosed with this form of non-Hodgkin’s lymphoma in April after detecting a swollen lymph node that he assumed was a cyst. Luckily, the couple was told that because of the scientific inroads made in developing a Covid vaccine, there has been much progress and change in how certain cancers are treated — and follicular lymphoma is highly treatable.

“The unlucky thing is that the treatment still involved a really primitive form of chemo,” Ms. Huberty, an artist and writer, said on Zoom, her husband at her side.

“It’s based on mustard gas they used in World War I. It’s in the class of nitrogen mustards,” said Mr. Huberty, who received his first round of a six-month treatment in early June. According to Ms. Huberty, the treatment involved “A day of chemo, a day of chemo and monoclonal antibodies, and then a day of a white blood cell-inducing shot to make your white blood cells skyrocket to counteract the chemo. And then the intravenous — four or five hours each time you go in for all these other things from gout medicine and antivirals, to Benadryl, Tylenol, anti-nausea, anti-anxiety. Literally, they just, like, throw a cocktail at you. . . . And by the time we got to the end of June, Alex had been in bed for three weeks. Just from the one week of treatment.”

Mr. Huberty, 50, an information technology consultant for small businesses on the East End, received three more rounds of treatment, each with worsening side effects that included severe bone and back pain, brain fog, and fatigue. Unable to work for more than a handful of days since June, Mr. Huberty suffered substantial income loss.

And that’s when he received the bad news: He was ineligible for Social Security disability unemployment due to health reasons, or unemployment disability, simply because his cancer is treatable. The fact that the treatment was so toxic and debilitating that it rendered him barely able to function, and entirely unable to work, did not factor into the equation. Outside of insufficient state funds for medical disabilities, there was no financial support system available for him and his family.

In the end, assistance came from the East End community. In September, Cindi Crain, a family friend, set up a GoFundMe page, helped by community members such as Almond Zigmund and other Hayground School parents. A goal of $50,000 was set; almost $38,000 has been raised to date.

In an email to The Star, Ms. Crain wrote, “My daughter went to the Hayground School with the Huberty kids and I got to know both Erica and Alex well through play dates and school committees. Even though the kids are at different schools now, our friendship endures. I knew what it meant to the family that Alex couldn’t work nearly as much while in treatment. Friends and I surmised that if we put out a plea for support, a pretty large community might respond. And wow did it ever! . . . It takes a village and thankfully we have an awesome one here on the East End.”

The fact that so many Americans have to resort to internet donations to meet basic needs like food, housing, medical attention, and financial support, exposes the lack of a social safety net. In June 2021, in an article about the surge of crowdfunding in the wake of Covid-19, The New York Times posited that the prevalence of mass online charity drives might actually reduce people’s interest in addressing the root causes behind why so many people need to turn to online donations. GoFundMe’s chief executive, Tim Cadogan, underscored that point by reiterating that the company was never intended to be a substitute for effective social services.

But for the Huberty family, there was simply no other way.

“We were very reluctant at first. But people were just amazing and incredibly generous,” said Ms. Huberty.

“We are ridiculously lucky,” added her husband. “But we shouldn’t have to go through GoFundMe.”

“Exactly. People kept saying, ‘No, it’s fine, you deserve it. You’ve given to so many other people and you guys are valuable members of the community. You’ve done soup kitchen stuff — of course, we’ll give you the money.’ But why should they have to? Our friends shouldn’t have to help us. And literally at the same time, we’re giving to the GoFundMe of our other friend who has cancer and I’m thinking, ‘Oh my God, it’s an entire community of people who have to support each other because there’s no support system in place’ — and we’ve all just come to accept this as normal,” said Ms. Huberty.

In October, Mr. Huberty contracted Covid, putting his cancer treatments on hold. He is able to work in a reduced capacity but is currently on drugs to boost his blood count, which he said causes “ridiculously crazy headaches.” Being in this holding pattern of not knowing what’s next makes it difficult for the family to plan ahead, emotionally and financially.

“We keep meeting more and more people that are going through the same thing, this kind of epidemic, for lack of a better word, of no safety net, no social, financial, employment safety net, no health safety net, no support nursing. It’s really odd. You’re really on your own,” said Ms. Huberty.