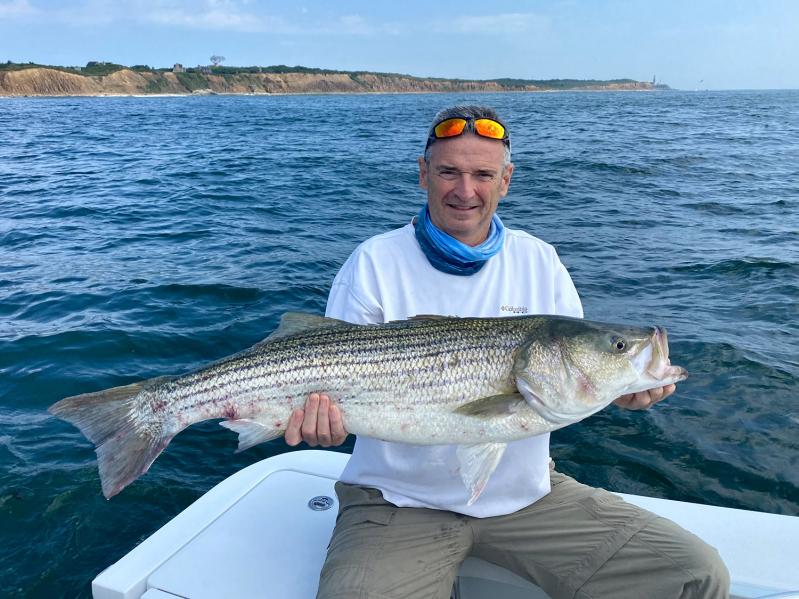 “I’m tired, very tired,” sighed Ken Morse, the longtime proprietor of Tight Lines Tackle on Bay Street in Sag Harbor, when I caught up to him late in the afternoon on Labor Day. And he had good reason to feel that way.

In his shop full of all things fishing, Morse took a few seconds to get his bearings. “I need some time off and to get a bit of rest,” he said, barely above a whisper from behind the countertop. “It’s been a long summer.”

As such, it was not a shock when Morse said that he would shut the doors to his popular establishment for three days after Labor Day. Working basically six days a week from sunrise to sundown for the past several months, Morse, like many others, needed some well-deserved rest and some time to catch his breath.

When I saw him again on Sunday after he had reopened Friday, Morse seemed refreshed. The days off provided him with time to catch up on sleep and prepare for the homestretch of the fishing season, which, depending on weather, usually concludes around Thanksgiving.

“It was good to get away for a few days and recharge the body and mind,” he said.

I too, had given myself a respite from fishing. Since heading out for an offshore excursion for codfish a month ago, I have not had a chance to wet a line, that is until Sunday morning.

Bluefish were on the menu as two friends joined me at my boat. Within 20 minutes, we arrived at the turbulent rip at the north end of Jessup’s Neck, an elongated, narrow strip of land that separates the waters of Noyac and Little Peconic Bays.

A day after the full moon, the incoming tide was running a stiff four knots as we dropped our four-ounce diamond jigs into the warm 73-degree water. It only took me a minute to hook into a small bluefish.

We repeated the drift several times, and in short order we caught our three-fish per person limit. There were plenty of fillets to be brined, dried, and hot-smoked on the grill.

Before heading back to the dock, we agreed to try a drift for weakfish at buoy 16 in the middle of Noyac Bay, but the bite was nonexistent. Radio chatter indicated that some fish were taken at first light, but that the action quickly died off as the sun rose above the horizon. C’est la vie.

Back to Morse on Bay Street: He concurred that plenty of bluefish have populated Jessup’s Neck, and that porgy fishing remained solid in many areas, including the east side of Gardiner’s Island. Sea bass too, are mixed in the catch in the deeper water.

Farther offshore, tuna — bigeye, bluefin, and yellowfin — remain plentiful. Joel Fisher, the longtime owner of Fishers Home Furnishings in Sag Harbor, took a day off from work to join his brother-in-law on his boat, which he docks at Mill Creek Marina in Noyac. The long trip to the offshore grounds to the east resulted in a fine catch of bigeye tuna, wahoo, and mahimahi.

“It was a real good trip offshore,” Fisher said with a smile.

A bit closer to shore, at the Cartwright grounds south of Montauk, as well as the area near the Block Island windmills, fluke fishing has been good of late, including a 12-pound doormat landed on the Montauk Star on Saturday’s trip. The Miss Montauk II netted one a few ounces lighter the same day.

“It wasn’t an easy day, but we put it together,” observed Capt. Mark Ryckman of the Montauk Star. “The big ones are going to show this month. Now is the time, with this great stretch of weather ahead.”

For some, it’s no rest for the weary.