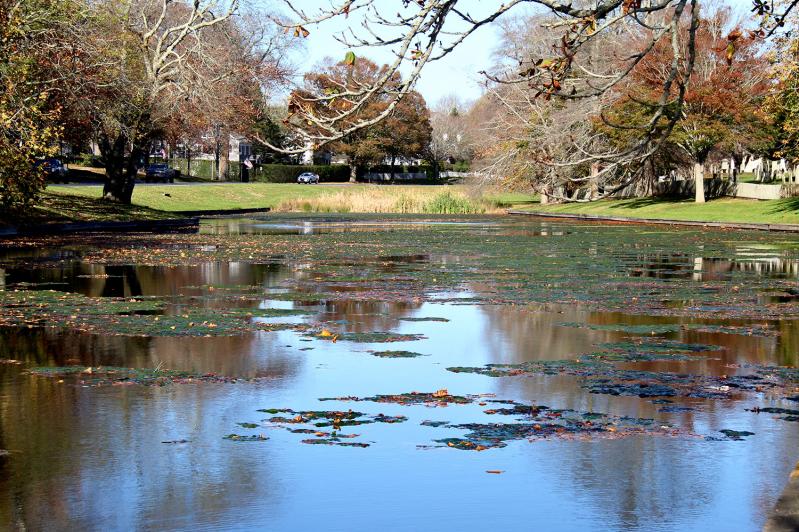 Left unchecked, Eurasian watermilfoil will spread and cover the top surface of the pond, depriving the water of oxygen.
Durell Godfrey
By Christopher Gangemi

Since it was “mucked out” last year, it has had a difficult time holding water. It’s not fed by groundwater, like the coastal plain ponds of the Long Pond Greenbelt or Hook and Georgica Ponds. Instead, it’s a “perched pond” according to Jim Grimes, an East Hampton Town trustee who is on the pond committee. “There’s a lens of clay under the pond that allows it to hold water,” he said in a phone call.

“Back in the 1930s they mucked it out and it was 20 years before it held water good again,” he said.

Apart from water level issues it is also beset by an invasive aquatic plant, Eurasian watermilfoil. At Friday’s East Hampton Village Board meeting, the board heard from Kris Almskog, a professional geologist with P.W. Grosser Consulting, on a plan to remove the plant.

He said at present the milfoil covers about 90 percent of the northern fifth portion of the pond and about 50 percent of the remaining pond. Town Pond averages only two to three feet in depth and has a sandy bottom. Left unchecked, the milfoil will spread and cover the top surface of the pond, depriving the water of oxygen.

Mr. Almskog proposed sending a crew into the pond to rake, seine, and harvest the visible milfoil.

“We are hoping to mobilize sometime next week. There could be weekend work. We anticipate three to four days of activity with a four-person crew,” he told the board.

The work proposal provided to The Star acknowledged that the effect would be largely aesthetic, as plant fragments and roots will remain in place allowing the invasive plant to spread in the future. “The watermilfoil will return, and long-term management solutions should be evaluated,” Mr. Almskog wrote in the proposal.

“How long would that stave them off?” asked Sarah Amaden, a village trustee.

“You will see some areas start to propagate back up next spring and summer,” said Mr. Almskog. “It shouldn’t be as dense for possibly a year or two.”

During that time, he encouraged the board to work with the state Department of Environmental Conservation on a “longer-term more definite strategy” describing his work as a “temporary maintenance strategy.” Once invasive weeds were present, he said, it became a question of short-term aesthetic fixes versus permanent solutions.

Gloria Frazee, a village resident, and member of ChangeHampton, speaking during the public comment period, urged the board to consider the pond as part of an entire ecosystem. The method proposed by P.W. Grosser could exacerbate the problem, she said, as the raking and seining breaks the milfoil into smaller plants that could regenerate.

“With this method it’s just going to grow back really fast,” she said.

“It’s a whole ecosystem. Are we looking at the big picture or are we picking one thing at a time? I’m happy you’re focused on this, but there are a lot of moving parts here.” Having a beautiful Town Pond requires a holistic plan, she said.

ChangeHampton also criticized a planting plan for Town Pond proposed by Ed Hollander, a landscape architect, at the October village board meeting. His plan failed to address the invasive mugwort attacking the pond’s north end, and relied on “native adaptive” plantings, instead of purely native plants.

Despite her comments, the board voted unanimously this time for the short-term fix, agreeing to pay Mr. Almskog and P.W. Grosser $16,500 to do the work.