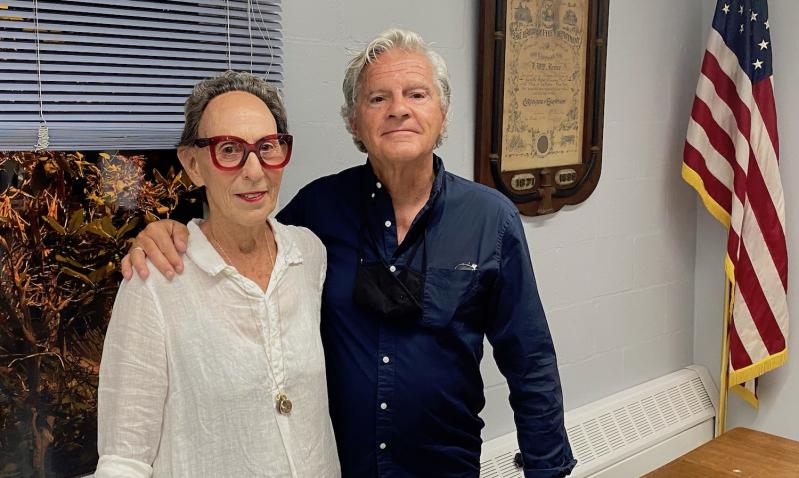 Dale and James Larocca had a lot to smile about when the votes were counted and Mr. Larocca emerged the victor in the Sag Harbor mayoral race.
Jamie Bufalino
By Jamie Bufalino

Aidan Corish and Robert Plumb, the incumbents running for the two open seats on the village board, were re-elected. Mr. Corish earned 572 votes, Mr. Plumb 497, and Bayard Fenwick, a real estate agent and an assistant captain in the Sag Harbor Fire Department, trailed with 250.

Mr. Larocca said yesterday morning that, given how close the vote for mayor was, it was hard to discern a clear message from voters. While campaigning, however, he had discovered that, despite the attention Bay Street Theater's plans to build a new home near the waterfront had received in the media, it was not a dominant issue. The decision to start charging for parking in the Long Wharf lot on the other hand, was widely unpopular. "The intensity of the reaction was bigger than I had sensed," he said. There is also "absolute confusion" among residents about the new waterfront zoning code Ms. Mulcahy has been seeking to develop, he said.

Mr. Larocca said he would spend the time before his swearing in to decide whom to appoint to the trustee seat he will be vacating, and to make other appointments. "There will be no big policy announcements right now," he said.

During the campaign, Mr. Larocca had criticized Ms. Mulcahy for not following through on a pledge she made in the 2019 election to develop a comprehensive plan for the village, and focusing instead on the new zoning code, which would apply to just a small portion of the waterfront. The lack of a comprehensive plan, he said, "is one of the biggest problems we have in combating this wave of money and developers that are now swarming all over the west side of town."

He said he would look out for the interests of longtime residents who are worried about being priced out of the village. "What people are seeing in their everyday lives is an increasing number of second-home owners who are living here this year because of Covid, and that changes the economic stratification of the village," he said. "Working families wouldn't put it this way, but there's a sense of threat that people feel."

As a trustee, he had helped oversee the village's purchase of the land that has become John Steinbeck Waterfront Park, and he promised to be proactive about developing the park.

He is not in favor of Bay Street Theater's plan to build a new home on a parcel adjacent to Steinbeck Park, and said he would like to see the village buy the property and use it as an extension of the park.

With a long history in government service, including as the state's commissioner of transportation and head of the Rebuilding New York infrastructure renewal program, he also assured voters that he had the experience to tackle longstanding issues such as the lack of affordable housing.

In the trustee race, Mr. Corish and Mr. Plumb had embraced most of Ms. Mulcahy's agenda, including the development of the new zoning code, and the introduction of paid parking, yet the incumbents easily prevailed over Mr. Fenwick, who was making his first bid for a trustee seat.
--
Note: This article has been updated since it originally appeared online.