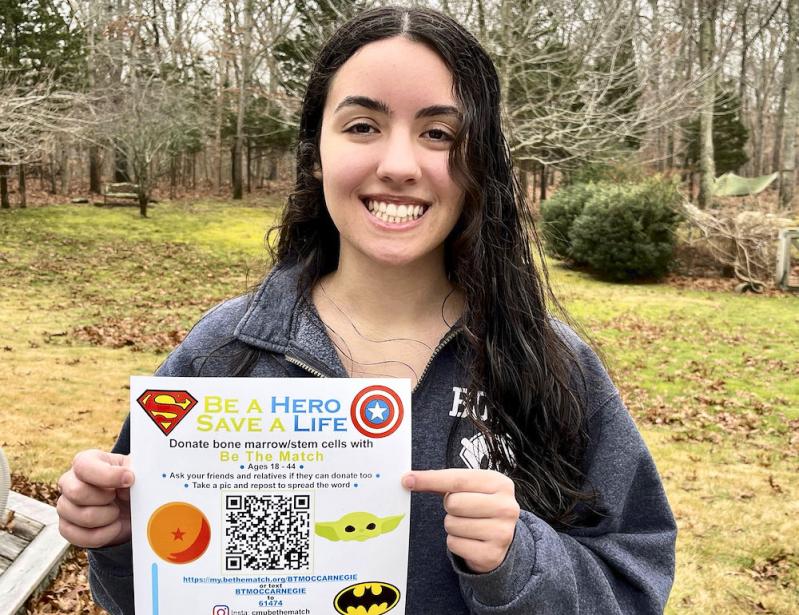 Sydney Salamy is organizing a bone marrow swab drive to find a match for a boy named Jax.
Patricia Salamy
By Judy D’Mello

Sydney Salamy, a 2018 graduate of East Hampton High School with a tradition of spearheading charitable endeavors, is continuing her good works. During her junior year of high school, she started a local chapter of Play It Forward, a charity that supplies sports equipment to families in need. Now Ms. Salamy is tackling bone marrow donations.

Now a student at Carnegie Mellon University in Pittsburgh, she has founded a branch there of Be The Match, a global organization dedicated to bone marrow transplantation.

Bone marrow transplants are needed for people diagnosed with certain forms of blood cancer. According to the Health Resources and Service Administration, an agency of the federal Department of Health and Human Services, statistics for the disease and its treatment are grim. Approximately 130,000 Americans are diagnosed with a serious blood disease each year. Leukemia, a form of blood cancer, strikes about 44,000 Americans annually, including 3,500 children, killing about half the adults and about 700 children.

A stem cell transplant is often the only hope of a cure, but only 30 percent of patients are able to find a compatible donor in their family. That means that at any given time, about 7,500 Americans are actively searching the national registry for an unrelated donor.

Ms. Salamy wrote to The Star referencing one particular child who is in need of a bone marrow donor. “He is a 6-year-old named Jackson Ramirez (Jax), who was recently diagnosed with a rare autoimmune disorder called IPEX (Syndrome) — a disease where most don’t live past infancy,” she wrote.

The disease is so rare that, according to Stanford Children’s Health, a pediatric and obstetrics health care network in California, Jax, who lives with his parents in Pittsburgh, had only a one in 1.6 million chance of being diagnosed with it. The syndrome is clinically known as Immunodysregulation polyendocrinopathy enteropathy X-linked Syndrome, and according to the Stanford network, the only curative therapy for IPEX is a stem cell transplant from a donor with a healthy immune system.

Ms. Salamy cited Jax’s ethnic heritage — “His dad is Mexican and his mom is Caucasian, so he is half Mexican” — as a factor that makes a match particularly difficult to find.

Minorities, she explained, have a lot of trouble finding matches. Her hope is that by publicizing that fact it will encourage more people of color to register.

Although Be The Match only allows 18 to 44-year-olds to join their bone marrow registry, Ms. Salamy wants those under 18 to know that they can register early and receive their donor kit when they turn 18. The kit makes it easy to collect a sample of cells by simply swabbing the inside of one’s cheek. Doctors use the sample to compare specific protein markers, known as human leukocyte antigens (HLA) with HLA markers of patients who need a bone marrow transplant.

According to the Be The Match website (bethematch.org), doctors search their registry daily looking for matches.

Ms. Salamy remains hopeful that 6-year-old Jax will find a match, maybe even from within East Hampton’s Latino community. But if not, she wrote, his story may encourage others to register or spread the word, thereby helping people in dire need to find their match and be cured.