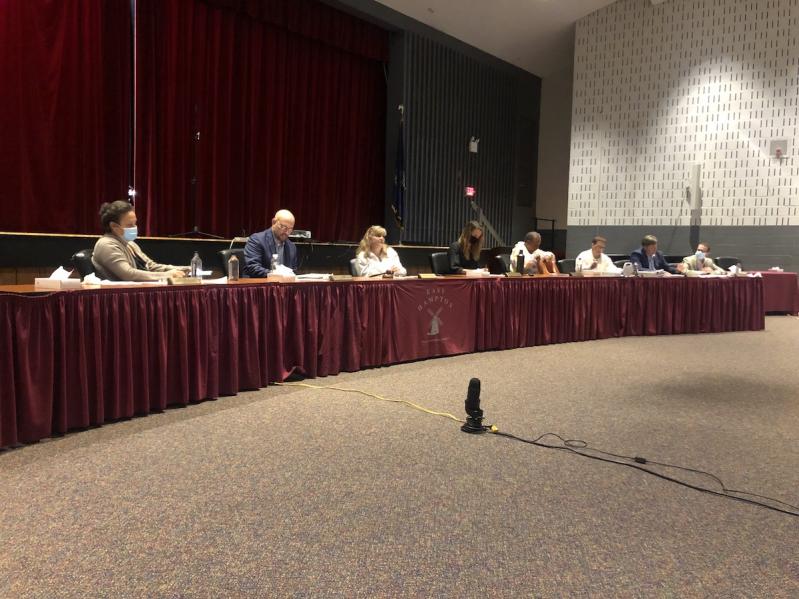 Students and staff in the East Hampton School District — even those who are vaccinated — will begin the new school year with masks on, the school board decided on Tuesday.

Officials said they cannot mandate Covid-19 vaccinations without legislative action for schools, and, because the vaccines do not yet have full United States Food and Drug Administration approval, they cannot even ask employees and families about their vaccination status, because of medical privacy rules.

Despite those challenges, Adam Fine, the district superintendent, said school will definitely reopen for in-person attendance without remote options except for cases in which a student is too medically fragile to attend school. Too many students fell behind academically or suffered emotional distress with remote learning over the last two years, he said.

"The idea is to return to normalcy," Mr. Fine said Tuesday. "The goal is to get the kids in school . . . and have all the activities, all the things we've normally done. . . . We don't want to deprive the kids of anything this year."

He said the mask policy will be revisited periodically after school starts, taking local vaccination rates into account.

The decision comes as the Delta variant of Covid-19 continues to spread and as the F.D.A. approaches full approval of the Pfizer vaccine, which is currently approved only for emergency use. Universal approval, which would open up vaccinations to children younger than 12, who are now ineligible for the vaccine, appears to be several months out.

"We can promote [vaccinations] as much as possible, but we are not going to be able to mandate anything unless the Legislature acts. That could even be Suffolk County," Mr. Fine said. "I'm going to be very honest. I don't see that happening. They are basically absolving themselves of making a decision. They will not go out on that ledge and do that."

However, he said, "it could all change in a week."

Citing numbers released by the American Academy of Pediatrics on Tuesday, CNN reported that new Covid-19 infections among children and teens in the United States rose 84 percent — from about 39,000 to 71,726 — from the seven days beginning July 15 to seven days starting July 22.

As of now, the Plexiglas barriers that separated students last year have been put into storage, and the school principals have been making plans specific to their elementary, middle, and high school students. For instance, at the John M. Marshall Elementary School, instead of eating lunch in their classrooms every day, students will take turns, in groups on alternating days, eating in the cafeteria and in their classrooms to avoid packing each grade fully into the cafeteria. At East Hampton Middle School, the library will still be used as a secondary lunchroom.

For those students who need remote options for medical reasons, Mr. Fine said there will be a combination of individual tutoring and independent work.

School employees will no longer take each student's temperature when entering the buildings. Wendy Geehreng, a school nurse overseeing Covid-19 logistics in East Hampton, said that "we didn't pick up one kid with Covid" by taking temperatures. All cases in the schools were identified by teachers' close observations of students, sending them to the nurses' offices whenever there was a question.

Ms. Geehreng also said she anticipates that quarantines will be very limited. "We got really good at contact tracing. When you do that well, you don't have to quarantine a lot of kids."

In other East Hampton school news, the board accepted a retirement letter from Lorraine Talmage, who spent 26 years as the nurse at East Hampton High School. The board thanked her for her dedication.

The district also formally approved the hiring of Sara Holden Smith as high school principal. Having been awarded a four-year contract with a starting salary of $185,000, she is to formally start on Monday.

Ms. Smith, whose appointment was announced by Mr. Fine on July 16, is a former Southampton High School principal who lives locally and whose husband teaches in the East Hampton School District.

"I'm overwhelmed and humbled by the outpouring of support, and thrilled to be here," she said.

The district also hired six full-time teachers, all of them for the high school, and three teachers as leave replacements at the elementary school. They will be among at least 30 new staff members hired in recent weeks — a disturbingly high number, Mr. Fine said. He said there had been a "mini exodus" of teachers and other employees, mostly because of long commutes and lack of suitable housing east of the Shinnecock Canal. There were nine new employees hired at this time last year and 20 the year before.

"It's becoming a challenge hiring people," he said. "The numbers speak for themselves."

The board agreed to schedule a work session in October on the subject of housing for employees.

Also on Tuesday, the school board awarded a contract of approximately $514,000 for LandTek Group Inc. to resurface tennis courts and other outdoor sports facilities. The board also approved spending an additional $355,525 on the new commercial-teaching kitchen at the high school after it was discovered that National Grid needed to enlarge a gas line.