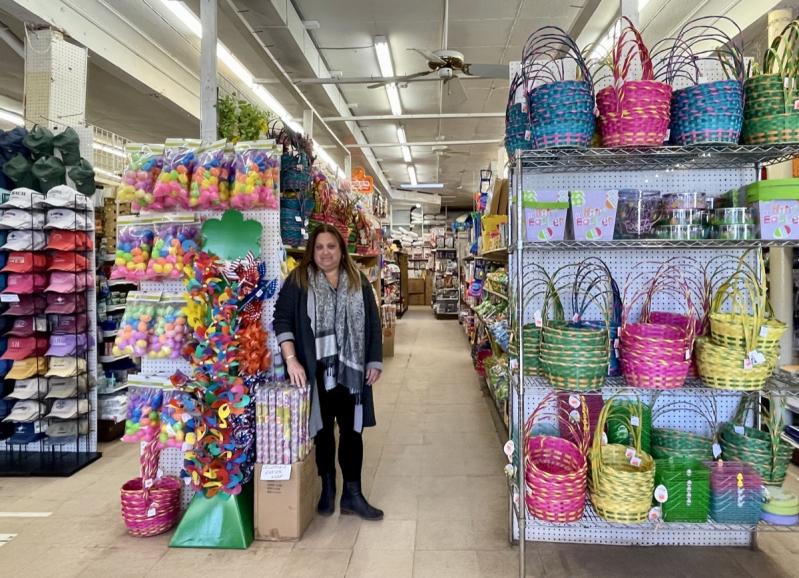 Lisa Field, the owner of the Sag Harbor Variety Store, is next up tomorrow in the "Knowledge Fridays" series at The Church in Sag Harbor.
April Gornik
By Mark Segal

Celebrating Sag Variety
At a time when mom-and-pop stores have all but vanished from the East End, the Sag Harbor Variety Store is a rarity, having been operating as a five-and-dime at its present location since 1922 and under the same family ownership for more than 50 years.

Lisa Field is a co-owner with her mother, Roseann Bucking, who bought the store with her husband in 1970 on a whim. Ms. Field, until recently the president of the village's Chamber of Commerce, will be at The Church in Sag Harbor on Friday evening at 6 to share her thoughts about place and community.

April Gornik, who will speak with Ms. Field, said, "We are so grateful to have Lisa come to talk about her family, her store, and her devotion to the village . . . the Variety Store is one of the treasures of the East End."

The program is part of "Knowledge Fridays," The Church's monthly series of talks by local experts in a variety of fields. Tickets are $10.

Also at The Church, Sara Cochran, its chief curator, will lead a tour of the current exhibition, "Empire of Water," on Sunday at 10:30 a.m. Tickets are $15.

Saturday Night Laughs
Also in Sag, the comedian Joseph Vecsey will return to the Bay Street Theater to host a new All Star Comedy show featuring Max May, Linette Palladino, and Jamie Roberts, on Saturday at 8 p.m.

Mr. May is a regular at the Stand Up NY comedy club and won the 2016 Winter Laughs Comedy Competition at the Broadway Comedy Club in New York City. Life as a mother, wife, and veteran informs the comedy of Ms. Palladino, who was recently selected as a finalist in the HBO Latino Stand-Up Competition. Mr. Roberts is the executive producer and weekly host of the long-running "Sunday Night Live" comedy show.

Spring Gardening
The Madoo Conservancy in Sagaponack will offer a new workshop, "The Way We Garden: Spring," on Saturday from 9 a.m. till noon. Noting that Madoo has many of the same problems that face home gardeners, Alejandro Saralegui, the conversancy's director, will lead participants from the greenhouse to the venue's various gardens, with a focus on spring blooming bulbs, dahlias, spring shrubs and trees, and low-maintenance, organic gardening.

The cost is $100; registration is at madoo.org.

A Conference for Young People to Create Solutions
Get Outside, Get Moving
Two Traditions, One Fair in Springs
END_OF_DOCUMENT_TOKEN_TO_BE_REPLACED