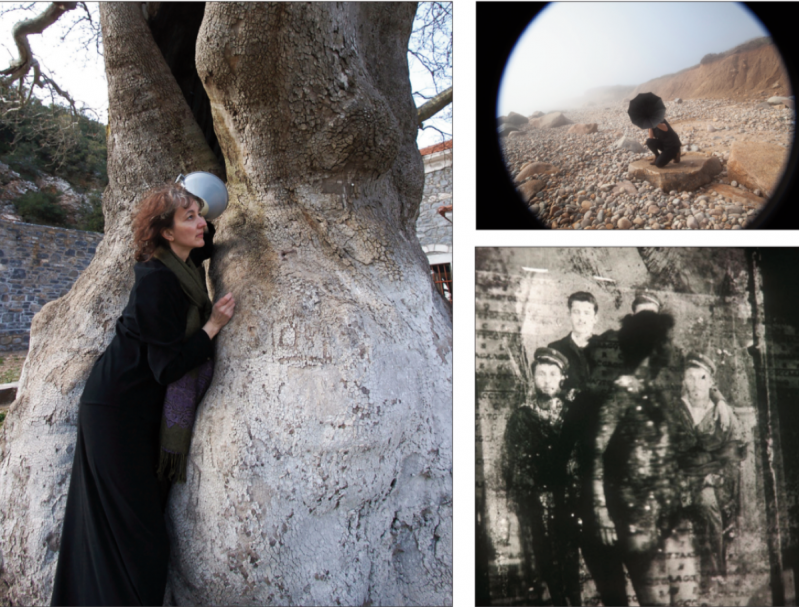 Patricia Maurides listened to the sounds of the plane trees on a visit to Arahova, Greece. In an image from her "Montauk Moorlands" series, top right, the artist listens to the sounds of the sea through an old phonograph ear trumpet. Above right, an image from the "Ancestral Code" series combines genetic code, an old photograph of her great-grandfather and several sailors, and the artist, who stands in the light of the projected slide.
By Mark Segal

A theme that runs through the photo-based work of Patricia Maurides from the early 1990s to the present is the permeability of the membrane between the past and the present. For her, the past is inextricably bound up with her Greek ancestry.

Her family is from Arahova, a village in Greece’s southern Peloponnese. Her father emigrated from there to Chicago in the 1930s, eventually settling, along with others from the village, in Greenville, S.C. Ms. Maurides speaks Greek fluently and has traveled there often over the years.

In 2007, as an artist in residence at a gallery in Sparta associated with the National Gallery of Greece, she had an opportunity to photograph and record the sounds of Arahova and the river Evrota. She photographed the landscape, including a grove of ancient platanus, or plane trees, and recorded both the ambient sounds of wind and animals as well as questions she posed to the trees.

Making frequent use of her camera’s self-timer, Ms. Maurides appears in many of the images, recording, listening through an ear trumpet, plunging headfirst into a large crevice in a tree.

“I came to think of the crevice openings in the plane trees as portals to the past,” she writes in a catalog for the project. “These places listen and remember; they are keepers of secrets, and it is my hope that my work honors them.”

While there is a strong, almost spiritual element in much of her work, her background as a scientist is integral to her practice as an artist and teacher. Ms. Maurides earned a B.S. in biological sciences from the University of South Carolina before moving to New York City, where she found a job in a research laboratory while taking classes at the Art Students League.

“When I was in New York in the early 1980s, I was aware of the performance art scene,” she said during a conversation at her home in Sag Harbor. Film Forum introduced her to experimental films; she was impressed by the work of Maya Deren and Jean Cocteau, among others.

She moved to Pittsburgh in 1985, and was a researcher for the next six years in the department of biological sciences at Carnegie Mellon University, all the while taking courses in the school’s college of fine arts. In 1995, she earned her M.F.A. there.

What brought the two disciplines together for her, she recalled, was an invitation to teach a course in art and science at a school in Pittsburgh. She'd just begun working on the arts degree at the time, while studying a microscopic virus, sequencing its DNA, and making images of it in the research lab. “I was doing photography, and the advantage you have when you work in the sciences is, you have access to great imaging equipment.”

She began teaching at Carnegie Mellon soon after, and in 1999 became academic director of its undergraduate degree programs in interdisciplinary studies. “There was tremendous support there for students who wanted to go outside of traditional boundaries.”

Science has since found its way into her photographs in unexpected ways. Her “Sight” series from 2018-2020 was developed after an eye scan of her optic nerve showed that, like her grandparents, she was susceptible to glaucoma. “The photograph inspired me to think I could use it as scaffolding to put in my own images of what I was seeing” in Sag Harbor, where she has lived since 2017.

The resulting binocular images, like many of her photographs, are layered, with elements from the local landscape -- horseshoe crabs, wild mushrooms, tree rings, and the artist herself, superimposed on the scans.

The layering of images began in the mid-'90s with a series called “Ancestral Code.” Its background is a printout of genetic code, on which she projected slides of old family photographs, including one of her great-grandfather posing with several sailors.

Using the self-timer, she appears in the final photograph as a whirling blur, conflating her family’s past not only with her physical presence but also with a sliver of Greek text and an artifact from her work in the research lab.

Influenced in part by experimental filmmakers who literally incised their film stock, she burned and scratched the surface of some of the slides. The resulting images have an almost textural quality that suggests both the complexity and the imprecision of memory.

The images in another series, “Legacy,” were inspired, she said, by her father’s distrust of government. Having experienced the failure of banks and nations during the Great Depression, he saved coins in bins, tins, in closets, behind walls. She took some to the bank after his death, but kept many others.

The coins form a scaffolding of sorts for other superimposed images, ranging from her grandfather’s Victrola to the artist herself, seemingly asleep on a coin-covered rock. Of the old record player, which still plays 78s, she has said, “I love the sounds; the scratches and jumps toggle me back and forth through time.”

Since moving here, Ms. Maurides has been teaching studio art, darkroom and digital photography, and a course called Art and the Brain at Stony Brook University. She created both the course and an exhibition titled “Neurons and Other Memories: Work in and Around the Brain” while at Carnegie Mellon. “When I think of myself as an artist, I think of myself as an artist and an educator,” she said. “They work together and fuel each other.”

Ms. Maurides’s mother was a teacher with a master’s in special education. “She was a fierce advocate for disability rights, and she would bring me along as her assistant when she was working.” As it happened, one of the first people Ms. Maurides met here was Jacqui Leader, the director of the East End Special Players, and it followed naturally that she would ask Ms. Leader if she needed any help. She was welcomed with enthusiasm and soon came aboard as a guest artist.

Under the umbrella of the Special Players, the Explorers Program had been launched in 2014 as an opportunity for adults with varied needs and abilities to meet, engage with culinary, visual, and performing arts, and go on excursions throughout the East End. “The Explorers were my first friends,” said Ms. Maurides, who began doing photo and collage projects with the group, including one in which she gave each explorer a point-and-shoot camera and a journal. “They took me on their adventures. I became an explorer, and they became my eyes and ears for the area.”

The result is “Seeing Happiness,” a book of the explorers’ photographs and observations made on excursions to Montauk, LongHouse Reserve, the Morton Wildlife Refuge, and other local sites. Ms. Maurides is now in the process of making prints and framing them for a pop-up exhibition planned for October at The Church in Sag Harbor.