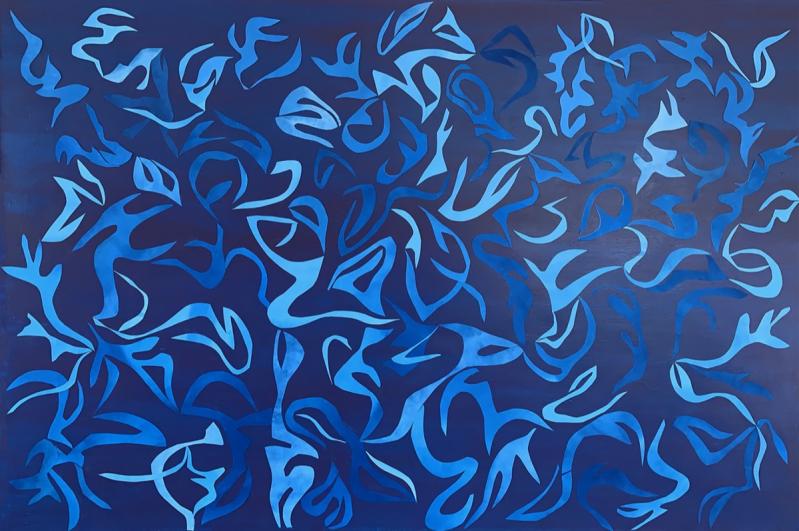 Margaret Garrett's "Between Dream and Sea" is on view at the Shelter Island Historical Society.
By Mark Segal

Parsons and Youngerman
The Drawing Room in East Hampton is presenting “Betty Parsons/Jack Youngerman: Paintings, Sculpture, and Works on Paper, 1950-1982” through Aug. 30.

The artists first met in Paris in 1956 when, after a visit to his studio, Parsons encouraged Youngerman to move to New York and soon after invited him to show at her gallery.

The exhibition highlights affinities in their practices and includes Parsons’s gouache abstractions from the 1950s and ‘60s, as well as later paintings and painted wood constructions.

Youngerman is represented by paintings from the late '50s and early '60s, when he was living in Lower Manhattan and showing at the Parsons Gallery. The exhibition also includes his works on paper and a selection of beach stones with polychromatic geometric patterns.

Stephen Hawkey Solo
“Exposed: The Art of Stephen Hawkey” is on view at the J. Mackey Gallery in East Hampton through Aug. 31. Prior to committing to a career in painting, Mr. Hawkey worked as an art director in advertising and as an interior architect at Michael Graves Architecture and Design.

His mixed-media pieces begin with old, obsolete computer punch cards that he attaches to each other. Atop that base he adds more layers, of graph paper, sheet music, and newsprint. A layer of acrylic paint gives the paper a structure on which he then draws, paints, scrapes, and erases.

“When the work no longer requires any more mark-making, I take it apart, only to reconstruct it in a more meaningful way,” said Mr. Hawkey, who lives in Bronxville, N.Y., and East Hampton.

Artists' Jewelry at Sotheby’s
“Sculpture to Wear,” an exhibition of more than 80 pieces of jewelry by modern and contemporary artists, is on view at Sotheby’s in East Hampton through Aug. 28.

“Louisa recognized that artists, especially sculptors, understood three dimensions and had a special facility for designing wearable pieces,” said Ms. Dubin. “They bring a fresh approach to materials and techniques while creating more intimate and often very different versions of their signature artworks.”

Artists for Haiti
The fourth annual Hamptons Artists for Haiti benefit will take place on Saturday from 5 to 8 p.m. at East Hampton Airport. The beneficiary of the event -- with music, wine and cocktails, jewelry, crafts, and a silent auction of work by 35 artists -- is Wings Over Haiti, a nonprofit founded in 2010 by Jonathan Glynn.

Mr. Glynn, a Sag Harbor artist and small-plane pilot, began flying into remote regions with aid after the 2010 earthquake. Those missions morphed into Wings Over Haiti, which opened its first school in 2010 near Port au Prince. A second school is now open in Ranquitte; funds are needed for its expansion.

Tickets for Hamptons Artists for Haiti are $175, $195 at the door, and available at wingsoverhaiti.net

"Bonac Blind" at Leiber
Scott Bluedorn's "Bonac Blind," a floating, hand-built micro-dwelling modeled after a traditional duck blind, has migrated from the Parrish Art Museum to the Leiber Collection in Springs. Mr. Bluedorn, who hopes the piece will draw attention to the shortage of affordable housing on the East End, will be available to give tours to small groups, on a first-come-first-served basis, from 1 to 4 p.m. on Sunday

Garrett on Shelter Island
“Moving Images: ‘The 19’ and Other Works,” an exhibition of videos, paintings, and works on paper by Margaret Garrett, will open at the Shelter Island Historical Society with a reception on Saturday from 5 to 8 p.m. and continue through Sept. 8.

Ms. Garrett trained as a dancer and was a soloist with the Cleveland Ballet before discovering painting in her early 20s. “The 19” is a video and suite of painted collages inspired by 19 poses, chosen from Martha Graham dances in honor of the centennial of the 19th amendment.

Of “The 19” the artist has said, “In creating these pieces, I felt like I was working with a very potent alphabet, an intimate language about dance, women, and power.”

Two Painters at Keyes
Keyes Art in Sag Harbor will present “Broken Arrow,” a show of paintings by Erika Ranee and Melinda Hackett, from Saturday through Sept. 6, with a reception set for Saturday from 6 to 8 p.m.

Ms. Ranee’s abstract mixed-media works are built up by layering a range of materials, including acrylic, shellac, sand, spray paint, oil stick, and paper collage on canvas. She has cited “the cacophony of city streets, its sounds and smells” as part of the inspiration for her winding webs of color.

Ms. Hackett takes abstraction in a different direction, populating her canvases with distinctive shapes that suggest wildly colorful microscopic forms of life that seem to collide, float, and spin across her surfaces.

Warhol and More
“Mid Summer Mix,” a group exhibition that includes 20 works by Andy Warhol, is at N53 Gallery in East Hampton through Aug. 21. The Warhols range from portraits of Queen Margrethe II of Denmark and Queen Ntombi Twala of Swaziland to his “S&H Green Stamps” and “Muhammad Ali: The Fist.”

Photography Talks
In conjunction with its current exhibition, “Beyond the Streets on Paper,” the Southampton Arts Center is presenting ICP Talks, a series of three illustrated talks by photographers who work on the streets.

This evening at 7, Richard Renaldi, a portrait photographer, will discuss his recent project, “Touching Strangers,” for which he paired strangers on the street and asked them to touch or embrace each other to create moments of vulnerability and compassion.

The series will continue with Andre Wagner’s photographic investigation of the American social landscape (Aug. 12), and, on Aug. 19, with Alex Webb and Rebecca Norris Webb, who will discuss both individual and collaborative projects.

New at Ma’s House
Ma’s House, a communal art space on the Shinnecock Indian Reservation in Southampton, runs a residency program for artists of color based in the United States.

“Time Cloud,” an exhibition of work by Yanyan Huang, who is currently in residence there, will open with a reception Saturday from 5 to 7 p.m. and remain on view through Aug. 14. The show will feature new watercolors blending elements of Shinnecock origin mythology with personal creation myths.

Art and Design House
The Galerie House of Art and Design, a show house featuring both modern and contemporary artworks and objects from galleries and interior designers, will open on Saturday at 772 Middle Line Highway in Sag Harbor and run through Sept. 6.

The house will be open Wednesdays through Sundays from 10 a.m. to 4 p.m., with admission by timed tickets that can be secured from galeriemagazine.com. Tickets are $55.