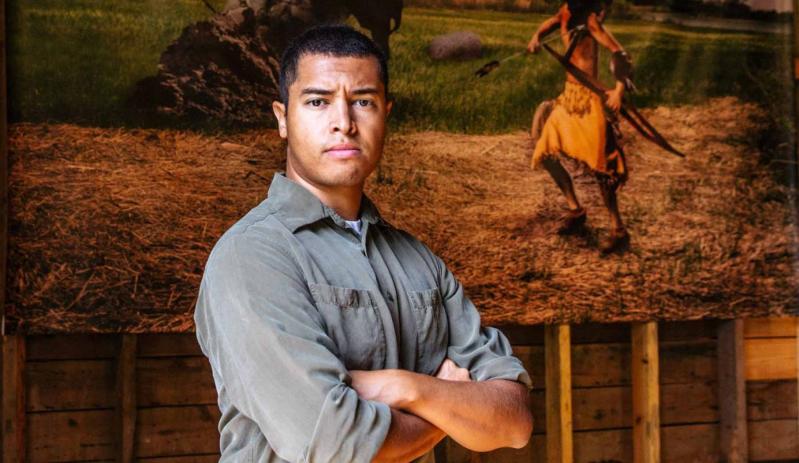 Jeremy Dennis will host "Ma's House," a podcast about the artists' retreat and communal art space on the Shinnecock Indian Reservation.
By Mark Segal

News From LongHouse
The board of trustees of LongHouse Reserve has announced the appointment of Carrie Rebora Barratt as its new interim director. Dr. Barratt has served as deputy director at the Metropolitan Museum of Art and as president and C.E.O. of the New York Botanical Garden.

Dianne Benson and Nina Gillman, co-presidents of the board, said, “Carrie brings an ideal blend of experience in art, gardens, and museum management to us -- almost as if we would have had to invent her -- to help coordinate all of the elements of transition before us. We feel so very fortunate to have her at LongHouse Reserve and look forward to introducing her to our extended community.” Dr. Barratt will arrive at LongHouse on Monday.

At the same time, Matko Tomicic, the executive director of LongHouse, and the board have announced that he will be leaving the institution after 26 years of service. “In creative and instrumental ways, Matko helped Jack Lenor Larsen realize his dream to create the LongHouse we know today,” said Ms. Benson and Ms. Gillman.

Jeremy Dennis, Streaming
The First Twenty, a new initiative of All Arts, the Emmy Award-winning multimedia platform created by WNET, will present “Ma’s House,” featuring the fine art photographer Jeremy Dennis of the Shinnecock Indian Nation, on Monday at 8 p.m.

Mr. Dennis, whose work explores indigenous identity, assimilation, and tradition, will discuss the evolution of Native American art and the building of Ma’s House and BIPOC Art Studio, an artist's retreat and communal art space on the Shinnecock Reservation in Southampton that will include a residency for BIPOC artists, an art studio, and a library. It will also host art and history-based programs for tribe members and the broader local community.

Writing Workshop
“Writing With Wade,” an online eight-session workshop organized by Bay Street Theater and originally scheduled for Sept. 27, will launch on Monday at 4 p.m. and continue through Nov. 29.

The workshop is led by Wade Dooley, an actor and playwright whose comedy “The Prompter,” which starred Tovah Feldshuh and Mr. Dooley, premiered at Bay Street in 2019. Workshop members will share their work weekly and receive feedback from Mr. Dooley and other class members.

The fee is $250; registration is on the theater’s website. Participants will receive the class link on the afternoon of each session.

A Studio for OFVS
Our Fabulous Variety Show, the nonprofit performance and arts education organization that has been creating theatrical productions since 2010, has announced the opening of a new studio space at 977 Bridgehampton-Sag Harbor Turnpike in Bridgehampton.

Class offerings include acting and improvisation, scene study acting, ballet, tap dance, musical theater and Broadway dance, and many others. Classes began on Monday, but registration is available on a rolling basis. The full schedule is on the company’s website.

This article has been changed from its original and print version to correct the spelling of Dr. Barrat's surname in the second sentence..