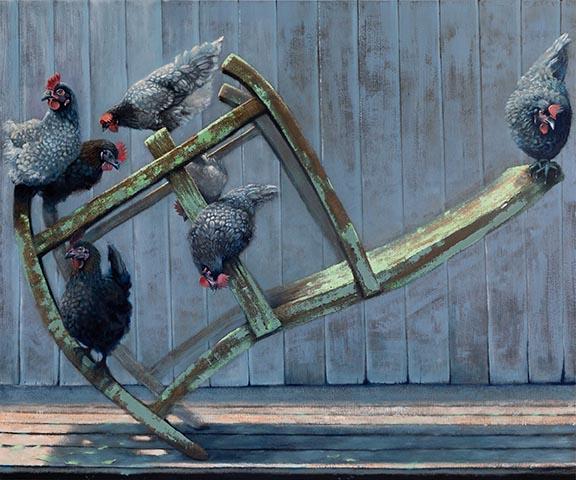 Lauren West's painting "Secure Limbo" will be on view at Tripoli Gallery in Wainscott.
By Mark Segal

Abstraction at Colm Rowan
“The Paintings of Ben Georgia” will open at Colm Rowan Fine Art in East Hampton with a reception on Saturday from 2 to 5 p.m., and will remain on view through Oct. 31.

Mr. Georgia studied with the Abstract Expressionist painter Theodoros Stamos at Columbia University in 1969 and at the Art Students League several years later. According to a statement by the artist, he paints directly from his emotions, his memories, and his knowledge of art history, “but always with integrity and great feeling for life.”

The exhibition features works created during the last five years that reflect his idiosyncratic use of abstract form, color, and light.

Lauren West at Tripoli
“For Purpose, By Accident,” an exhibition of paintings by Lauren West, will be on view at Tripoli Gallery in Wainscott from Friday through Nov. 15. A reception will be held Saturday from 5 to 7 p.m.

Ms. West’s recent paintings explore the progression of beings, primarily birds, from a prehistoric past. The narrative tones range from the surreal to the menacing to the barbaric. The result, says the artist, is a “wild combination of animals, beasts that barely exist, a few humans, and the constant question of what in the hell we’re all doing here.”

Gabriele Raacke at Ashawagh
"Glass Dreams,” Gabriele Raacke’s first solo show since 2017, will be on view at Ashawagh Hall in Springs from Friday through Monday, with a reception set for Friday from 5 to 8 p.m.

The exhibition features her most recent work on glass, including figurative scenes, large abstract paintings, and a new series of glass prints. She originally worked on canvas, but began transitioning to glass in the early 1990s and hasn’t looked back.

She told The Star in 2015, “I don’t know how to paint on canvas anymore, because it’s just the opposite.” Because the paint is beneath the glass, she said, it has a luminosity that cannot be achieved on canvas.

Nivola and Steinberg
The Drawing Room in East Hampton will present concurrent solo exhibitions of work by Costantino Nivola and Saul Steinberg from Friday through Nov. 29.

“Sandcasts, Graffiti, and Carved Concrete” features examples of Modernist abstract forms Nivola used to represent the human figure and his associations with his pre-war life in Sardinia. The show highlights the inventive techniques the artist established for casting in sand, carving, and incising the porous surfaces of wet concrete.

“Still Life” brings together watercolors, drawings, and wood sculptures that illuminate Steinberg’s keen observations and witty interpretations of common objects. The subjects of the works on paper and carved wood objects range from floral still lifes to cubist tabletops. Painted wood sculptures include whittled fountain pens, clocks, and a camera.

Three at Keyes Art
“Eyewitness,” an exhibition of work by John Battle, Virva Hinnemo, and George Negroponte, will open at Keyes Art in Sag Harbor with a reception Saturday from 6 to 8 p.m. and continue through Nov. 28.

Mr. Battle is a metalworker and sculptor whose work, writes Mr. Negroponte, “is unfailingly anthropomorphic, low technology, and warm-blooded.” Ms. Hinnemo makes abstract paintings whose chunky forms are created with thickly applied paint. Mr. Negroponte, too, is a painter, who says he is trying to squeeze out every trace of lyricism from his work, leaving an image that is “unvarnished, exposed like bark on a tree.”

The exhibition is meant to confirm that Modernism is alive and well with works that struggle to clarify purpose and convey meaning with familiar tools.

Toni Ross in Water Mill
The Watermill Center will present “Finding Beauty in a Dark Place,” an exhibition of recent work by Toni Ross, from Friday through Oct. 17.

“Finding Beauty” consists of 52 individual weavings of wool, cotton, linen, and silk. Eighteen feet in length, the piece charts the course of Covid-19 throughout the United States. Each weaving corresponds to a state and features the graph of the virus’s progress over an eight-month span from 2020 to 2021. The overall composition corresponds to a map of the United States.

In a statement, Ms. Ross said that creating the work served as a “navigational tool that guided me through the disorientation of the pandemic.” “Finding Beauty” was selected as the poster for the 2021 Hamptons International Film Festival.

“Symbiosome Schoolhouse,” which features sculpture, new works on paper, video, and the wall reliefs the artist calls “Touchmaps,” is on view through Oct. 24 at the Oysterponds Historical Society in Orient, where she has been in residence at the William Steeple House since October 2019.

Tickets, which are sold only in advance online, are $12, free for members and students. The talk will also be available via livestream at no charge.

Michael Butler in Sag
“At Home in Sag Harbor,” a solo show of work by Michael A. Butler, will open on Saturday at the Sage and Madison boutique in that village with a reception from 5 to 7 p.m., and continue through December.

Mr. Butler’s paintings, most of which are small, depict different aspects of life in Sag Harbor, including 19th-century whalers, beach scenes, neighbors, and local birds.

The artist, who is self-taught and has described himself as a "narrative folk artist," has been painting since the 1970s. Unlike outsider artists, who are also self-taught, he is knowledgeable about art and art history, has exhibited widely for more than 30 years, and for a time directed the Jonkonnu Gallery in Sag Harbor.

What Is Afrofuturism?
That question will be the subject of a panel discussion Thursday at 6:30 p.m., both in person at the Eric Firestone Gallery in Manhattan and via Zoom. The term has been defined as a cultural aesthetic that combines science fiction, history, and fantasy to explore the African-American experience and connect those from the Black diaspora with their African ancestry.

The discussion will include Susan Elizabeth Cahan, who has written on the art museum in the age of Black Power; Kimberly Drew, a curator, writer, and activist, and the artists Algernon Miller and Saya Woolfalk. Ingrid LaFleur, a curator, artist, and Afrofuturist, will moderate.

Yektai in Manhattan
An exhibition of paintings by Manoucher Yektai is on view at Karma Gallery’s two spaces in the East Village, 172 and 188 East Second Street, through Nov. 13. Born in Iran, the artist moved to Paris in 1944 and to New York City a year later. There he became part of the New York School, and numbered its most famous figures among his friends.

His lyrical works, which move between naturalism and abstraction, include still lifes, portraits, and color fields. Yektai died in Sagaponack in 2019.

On the Scene
A launch for “Seeing Happiness,” a book of photographs created by members of the Explorers Program of the East End Special Players with the artist Patricia Maurides, will be held at The Church in Sag Harbor Thursday from 5 to 7 p.m. A pop-up exhibition of the photographs will remain on view there through Monday.

The Pollock-Krasner House and Study Center will celebrate the life and achievements of Ruth Appelhof, the former director of Guild Hall, on Saturday from 2 to 4 p.m. at the Parsons Blacksmith Shop in Springs. Appelhof was a member of the Parsons family on her mother’s side. The free event will feature music by Job Potter and his band, and a smithing demonstration by Jim DeMartis.